Within minutes, the Astroworld Festival turned deadly- here's what we know about the show's timeline 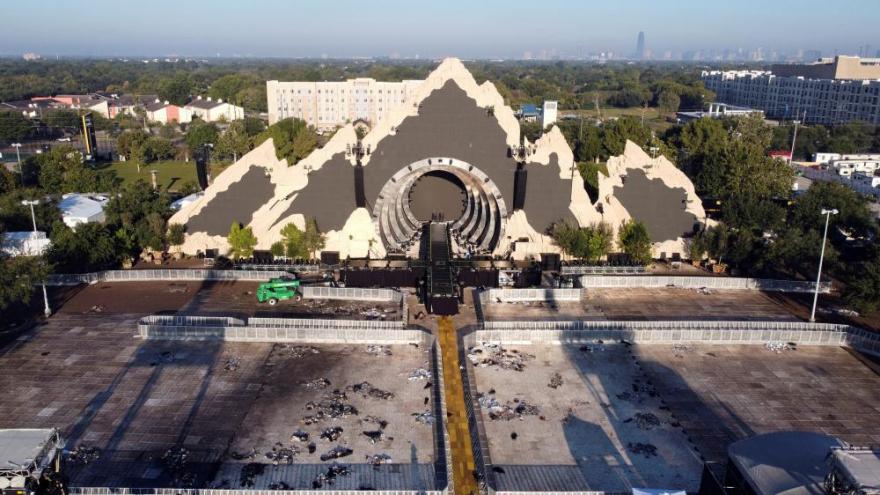 An empty stage is seen at the 2021 Astroworld Festival days after a stampede killed at least eight people in Houston.

(CNN) -- A crowd surge at a Houston music festival on Friday crushed concertgoers as they were left trampled and gasping for air, struggling to survive against a wall of people pressing forward toward the stage.

Police are investigating the potential causes of the surge, which occurred at the Astroworld Festival at NRG Park and led to the deaths of eight people as well as many more injured. The show continued for 40 minutes after initial reports of spectators being harmed reached first responders.

As authorities piece together the moments before and after the surge, here's a timeline of what happened, according to officials, witness accounts and CNN reporting:

Before the show: Earlier in the day, video from CNN affiliate KPRC showed numerous people rushing through a VIP entrance at the event -- knocking over metal detectors and other people as well as ignoring security staff.

The video showed some people helping a few others up. Houston Fire Chief Sam Peña told CNN he didn't know what caused the rush, either.

"We do know that we had people jump the fence," and at least one person was injured in the afternoon rush, Peña said.

CNN asked Peña whether the instance led to special precautions at this year's event. "It's obvious that if they did, they weren't enough," Peña responded.

Houston Police Chief Troy Finner visited rapper Travis Scott, the headliner of the festival who also acted as an event organizer, before his set to express "concerns about the energy in the crowd," according to reporting from The New York Times citing a source familiar with the chief's account.

CNN has reached out to Houston police and representatives for Travis Scott for comment on The New York Times report.

Before 9 p.m. Central Time: Madeline Eskins, an ICU nurse attending the show, told CNN's Christi Paul a countdown timer began around 30 minutes before Scott was set to appear on stage.

"And all of a sudden, people compressed up against each other and were pushing forward and backward. As the timer got closer to coming down to zero, it just -- it got worse and worse," Eskins said.

Concertgoer Jeffrey Schmidt said breathing became more difficult as the countdown moved closer to zero, as he and his friend decided to try and get out of the crowd.

"Little did we know, all hell was about to break loose. People started to pass out and fall to the ground," Schmidt told CNN.

Just after 9 p.m.: Scott took the stage to begin his set. The crowd surged forward as the show began, according to one concertgoer.

"The crowd became tighter and tighter, and at that point it was hard to breathe. When Travis came out performing his first song, I witnessed people passing out next to me," TK Tellez said.

Sarai Sierra, who went to the festival to celebrate her birthday, said she saw multiple people who could not breathe after Scott appeared on stage.

"I truly thought that if I fell it would've been the end of me. I spent at least 15 minutes just getting pushed around due to mosh pits or simply because people were 'raging,'" Sierra said.

9:30 p.m.: Officials first receive reports of people falling injured in the crowd, according to Peña, and said they "requested additional resources to the scene."

Finner said Saturday at a press conference "our people stepped up and immediately went to the producers and told them, 'Hey, people are going down.'"

"From the time that the mass casualty incident was declared, to the first unit on scene, was two minutes when we began to make patient contact," he said.

Witnesses describe calling out for help but being unable to be heard over the music.

"Travis Scott would have a short time in between songs, and we would scream our vocal cords out, so someone could hear us but nobody did," Tellez said. "This year's festival will be stuck with me forever. I've never seen someone die in front of my eyes. It was horrific."

Scott maintains he had no idea about the severity of what was happening in the crowd as he continued his set, telling fans in an Instagram video Saturday night he is "devastated" by what happened.

"Any time I could make out, you know, anything that's going on, you know, I just stopped my show and, you know, helped them get the help they need," Scott says in the video.

Footage from the concert's live stream also showed Scott pausing his performance and looking on in apparent confusion as an ambulance pulled into the crowd before finishing the concert.

Concertgoers Nick Johnson and Angel Rodriguez told CNN Scott stopped the show on at least three occasions to ask for help for those in the crowd.

When asked why the show was not stopped sooner, Finner cited potential rioting "when you have a group that's young" in a crowd of roughly 50,000 people.

Finner said there was a "discussion between promoters, the fire department, the police department, and NRG officials" about stopping the event.

Around 10:10 p.m.: The performance was stopped and the event came to an end, according to Houston mayor Sylvester Turner. One concertgoer told CNN's Rosa Flores he looked at his watch when the concert ended, and it indicated "10:13 or 10:14 p.m."