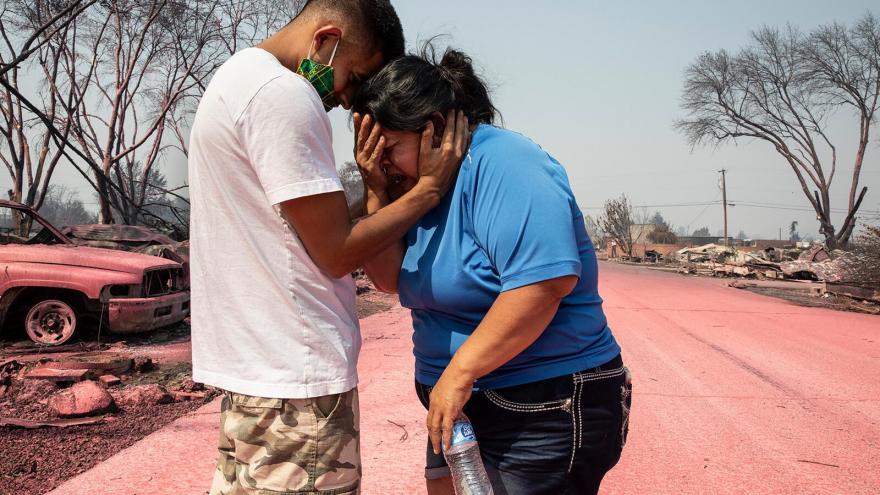 (CNN) -- Firefighters in Oregon are racing to slow down two wildfires from merging into a single inferno Friday after blazes in three West Coast states have killed at least 26 people since last month.

Some Oregon communities burned to the ground this week and about 500,000 people have been either ordered to evacuate or warned to be prepared to evacuate. State officials say they are focusing their efforts on saving lives but they anticipate a devastating aftermath.

"We know we are dealing with fire-related deaths, and we are preparing for a mass fatality incident based on what we know and the numbers of structures that have been lost," Andrew Phelps, director of the Oregon Office of Emergency Management, told reporters Friday.

As two major fires in Oregon -- the Beachie Creek and Riverside fires -- threatened to merge in the coming days, air quality levels have badly deteriorated from smoke. Four of the top five cities worldwide with the worst air pollution are in the region -- Portland, Seattle, San Francisco and Vancouver, according to IQAir, a Swiss air quality technology company tracking pollution levels.

The blazes have killed at least six people in Oregon, according to data from the state's office of emergency management and the Lane County Sheriff's Office. In California, 19 people have died from mid-August through Friday -- including at least nine found dead this week in one Northern California fire -- and one person was recently killed in Washington state.

Authorities had said the number of deaths linked to the North Complex Fire were 10 but the Butte County Sheriff Kory Honea said Friday that deputies discovered an anatomical skeleton model made out of resin in a storage shed and believed it was a human body.

When Jim and Tina Weber tried to drive away from a blaze in Oregon's Blue River area, flames blocked their road, with "fire crossing the road on both sides, and trees falling down," Jim Weber told CNN affiliate KVAL.

Eventually, firefighters led them and 30 other families to the parking lot of a running track, where they kept spot fires at bay throughout the early hours of Tuesday. Only hours later could firefighters lead them away in a car caravan, he said.

"We went by many, many homes that were still in flames on both sides of the river," he told KVAL. Much of Blue River, a community of a few hundred people, was destroyed, the governor has said.

More than 10% of Oregon's population told to evacuate

In Oregon, wildfires have killed at least three people and nearly wiped out the southern cities of Phoenix and Talent, near Medford. Authorities fear they'll find more bodies as they access more neighborhoods, they've said.

Portland Mayor Ted Wheeler declared a state of emergency Thursday night, closing city parks and activating evacuation sites for people in threatened areas. The state says about 500,000 people were under evacuation orders in Oregon -- more than 10% of the state's population. And that number is expected to grow.

Thirty-five wildfires remain active in the state, down from nearly 50 earlier this week. The blazes have scorched about 900,000 acres across the state, the Oregon governor's office said.

The governor called the scope unprecedented. For the past 10 years, the state has seen an average of 500,000 acres burned each year.

Adding to the grim outlook, Portland has limited firefighting resources because some have been deployed to assist in other parts of the state, according to Wheeler's emergency order.

Tiffany Lemmerz of Blue River lost everything, but her family survived, she said. One of several wildfires blazing in the state arrived at her doorstep Monday while she was at work. Her daughter, 6, niece and sister were in her house.

As she rushed home to get them, Lemmerz got into a wreck, she told CNN affiliate KOMO. She pleaded with a sheriff's deputy to give her a ride home, but they couldn't make it through the flames. The blaze melted the back of her car.

Firefighters from Junction City rushed to the home and got her relatives out.

"My kid's alive, that's all I care about," Lemmerz told the affiliate. "I can't say anything else. My kid is alive, and it was very close."

As the Beachie Creek Fire, formerly known as the Santiam Fire, moved through the night Tuesday in Marion County, a grandmother and her grandson weren't able to flee from the flames, their family said.

Wyatt Tofte, 13, was found dead in a car with his dog on his lap, a family spokeswoman told CNN, and his grandmother, 71-year-old old Peggy Mosso who was inside another car was also killed.

Angela Mosso -- Peggy's daughter and Wyatt's mother -- is in critical condition at a burn center in Portland after being badly burned, the Salem Statesman Journal reported. Her husband, who was looking for all three, found her walking along a road as the fire raged around them, according to the newspaper.

He didn't immediately recognize her, and when he told her he was searching for his wife and son, she said, "I am your wife," the Statesman Journal reported.

California: 'You'd think that you were in a fireplace'

Kristen Marin lives north of San Francisco in Mendocino County, where the massive August Complex fire -- the largest blaze in state history at 746,600 acres -- has helped turn the skies a dull orange.

"It feels a little like doomsday," Marin told CNN affiliate KNXV. "It felt like it was night all during the day time. The air quality was awful. The crickets were chirping. The floodlights were on, thinking it was dark. Everything is covered in ash. It smells like smoke. You'd think that you were in a fireplace."

Nearly 15,000 firefighters are battling at least two dozen major wildfires across California. Many, like the August Complex, were sparked by lightning last month.

In the Sierra Nevada range north of Sacramento, the North Complex Fire has torn through the Berry Creek community and Plumas National Forest since a lightning storm sparked it August 17, consuming more than 252,000 acres.

Seven bodies were found Thursday in areas scorched by that blaze, raising the total killed in the North Complex fire alone to at least 10.

"It was terrifying," resident Nancy Hamilton told CNN of the blaze that tore through the Berry Creek area. "It was a beast. The thing is a beast."

That fire has put more than 20,000 people under evacuation orders, including parts of the city of Oroville. Residents of parts of the nearby town of Paradise -- devastated by the 2018 Camp Fire -- have been told to be ready to leave.

In the 140,800-acre Slater Fire burning in California and Oregon since Monday, at least two people were found dead this week on the California side, Siskiyou County authorities said.

In the central California mountains northeast of Fresno, the Creek Fire has destroyed more than 360 structures, fire officials said. It has burned more than 175,800 acres and is 6% contained.

Fire officials issued evacuation orders and warnings across several parts of the state including in Southern California, where the El Dorado Fire continues to burn parts of San Bernardino County and is 31% contained. In San Diego County, the Valley Fire -- which has burned more than 17,000 acres -- also prompted several evacuation orders and warnings.

Statewide, more than 3.1 million acres have been scorched this year alone -- 26 times the amount that burned in the state through this date last year, according to Cal Fire.

Gov. Gavin Newsom has pointed to climate change as a primary factor in the wildfires.

"Wildfires are a big part of the seasonal challenge," Newsom said. "The challenge we're facing now is the extreme fire events that we believe are climate induced."

A 1-year-old dies in Washington

Washington state resident Darrell Herde woke up to a stranger pounding on his door this week. He barely escaped.

"He was yanking on my door and telling me to run. I thought he was a little nuts. I didn't think it was that bad," said Herde, a resident of Graham.

"Five minutes after, I walked out the door. It was crawling through trees," the 71-year-old told CNN affiliate KIRO. "And you can't believe how fast those embers were flying at you."

Later, he found his home a pile of rubble. Now, he just has the clothes on his back.

"Someplace in that pile, there is my mother's rings, and it tore my heart out," he said. "That's something that sort of killed me this morning. The rest of this stuff -- it's stuff that you can replace."

Elsewhere in the state, a 1-year-old boy was killed and his parents were badly burned as they tried to escape the wildfire, officials say.

The family was visiting their property in a rural area west of Spokane and evacuate in the middle of the night when the wildfire got closer. They abandoned their vehicle and ran to a river to flee the menacing flames, CNN affiliate KCRA reported. The couple was rescued from the river but their son did not make it.

The 16 major wildfires burning across Washington have scorched about 625,000 acres, according to the National Interagency Fire Center.

"The enormity of these fires, the geographical scope, the intensity and the destruction are unequal in Washington state history," Gov. Jay Inslee said.

About 100 large fires were burning Friday in the US West overall, including 12 in Idaho and nine in Montana, the NIFC said. The fires have burned more than 4.5 million acres in 12 states.