With the Cincinnati Bengals making the Super Bowl, area school districts are canceling classes the Monday after the game 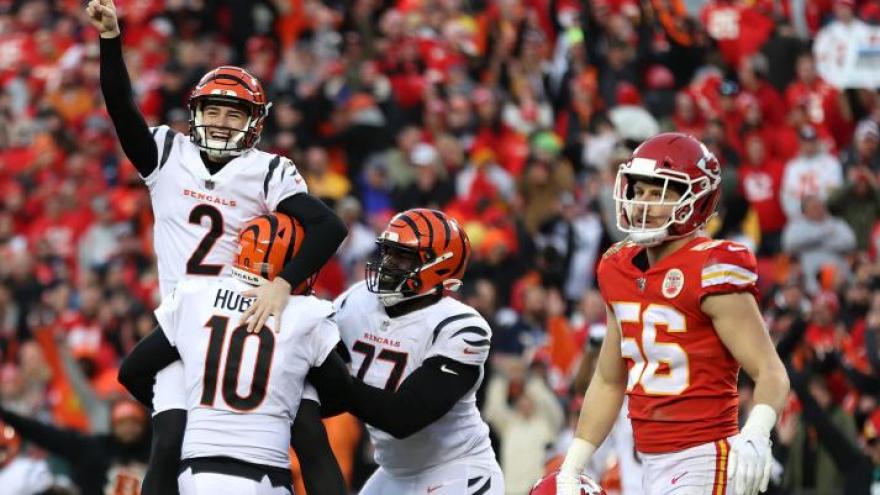 Cincinnati public schools will not have school on Monday, February 14 due to the Bengals playing in the Super Bowl the night before. Kicker Evan McPherson is shown here after kicking the game winning field goal in overtime against the Kansas City Chiefs in the AFC Championship Game on Sunday.

(CNN) -- Staying up late on Super Bowl Sunday to watch the game has notoriously left plenty of football fans needing a day to recover, win or lose.

For long-suffering supporters of the Cincinnati Bengals -- who are playing in their first title game in more than 30 years -- the opportunity for students and educators to sleep in has arrived as the Cincinnati Public Schools district has given the following Monday off.

"In honor of the Bengal's first Super Bowl appearance since 1988, CPS will not have school on Monday, February 14!" the district tweeted. "Staff and students will have the day off to celebrate what we believe will be our city's first-ever Super Bowl victory! #WhoDey"

Other districts in the area are also canceling classes, including the Ross Local School District in Butler County, according to Superintendent Chad Konkle.

Wanting the day off after the Super Bowl has become a recurring theme for sports fans, particularly in places starved for a title-winning team.

To help recuperate from the highs-and-lows experienced with each championship game, superfans, legislators and companies alike have all called for the game to be moved to Saturday or to make the following Monday a holiday.

The Bengals will face the Los Angeles Rams in Super Bowl LVI on February 13 at SoFi Stadium in Inglewood, California.