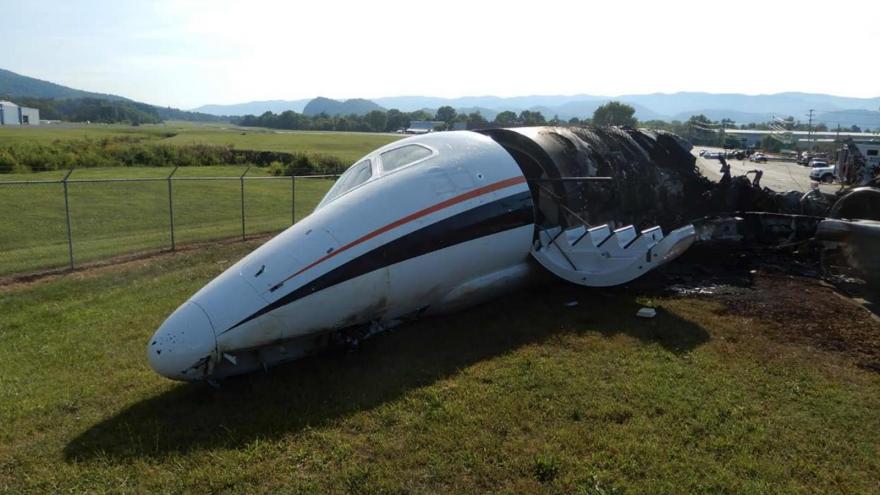 Remains of a Cessna plane which crashed with Dale Earnhardt plane and other people on board.

(CNN) -- As the crashed plane began to fill with smoke, one of Dale Earnhardt Jr.'s pilots kicked open the main cabin door wide enough for the NASCAR legend and his family to escape to safety, according to a trove of documents released this week by the National Transportation Safety Board.

All five people and a dog survived after the Cessna Citation crashed while the pilots were trying to land in August 2019 at the municipal airport in Elizabethton, Tennessee.

Both Earnhardt and the pilots told NTSB investigators that it seemed the right landing gear collapsed during a hard landing. The former driver, who was recently voted into the NASCAR Hall of Fame, tried to open an emergency door with the help of pilot Richard "Mike" Pope, but they couldn't get it to work.

Earnhardt also tried to get the rear hatch open. He told pilot Jeff Melton to try the cabin door again.

According to a statement from Earnhardt and his wife to accident investigators, there was heavy smoke coming from the bathroom and flames were visible.

"They reported that Mr. Melton kicked open the main cabin door wide enough so that he could exit. Mr. Earnhardt then handed his (15-month-old) daughter, who was in his arms, to the pilot, and then (Earnhardt and his wife) each squeezed out the opening. He believed the opening was about the size of a conventional oven."

Security video from the airport showed the crash. The plane bounced when it first touched down and on another touchdown, the right landing gear collapsed and the wing tip contacted the runway, according to the NTSB examination summary.

After leaving the runway, the plane went down a hill for 400 feet, even crossing a 25-foot wide creek bed before sliding up a hill, slamming through a chain-link fence and stopping on the edge of a highway.

The rear part of the cabin had significant fire damage, the document says.

The report says the three Earnhardts each had minor injuries. The pilots weren't injured.

Witness Cheryl Campbell told the NTSB she saw the crash and went to help.

Earnhardt was "struggling and not walking," she said. "He tried to get up and could not."

She said Earnhardt kept asking whether his family was OK and told her his back hurt.

Pope told investigators that he was the pilot in charge, and he had flown into the Elizabethton airport before.

He told the NTSB that normally he would wait until the aircraft was on the ground before deploying the thrust reversers that help slow a plane down, but in this case, he might have deployed them too quickly.

The NTSB's determination of the reason for the crash will come later in its final report.

Earnhardt, a team owner in the NASCAR Xfinity Series and a TV analyst, was headed to NASCAR events at Bristol Motor Speedway, which is about 15 miles from the airport.

He retired from full-time racing after the 2017 season after about two dozen concussions.

That year, Earnhardt, who is now 45, was voted as NASCAR's most popular driver for the 15th straight year. He won 26 times in the Cup Series.

In 2004, he was driving during a practice session at an American Le Mans Series race at the Sonoma Raceway in California. After a seemingly innocent looking one vehicle wreck, Earnhardt's car suddenly burst into flames -- engulfing his yellow Corvette in fire. In multiple interviews since that accident, Earnhardt credits a spiritual being for pulling him out of the fire to safety.