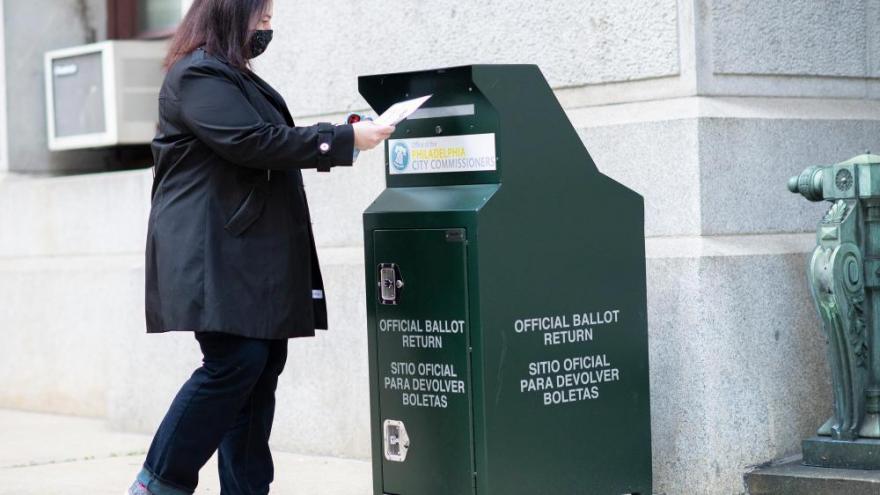 (CNN) -- With Amy Coney Barrett now seated on the Supreme Court, Republicans are pushing for reconsideration of a Pennsylvania case on mail-in voting -- the first potential test of how the new justice will handle election challenges.

The case is one of several legal challenges across the country seeking an audience before the Supreme Court or being considered in state courts touching on voting and the pandemic, leaving rules for counting ballots in several key battleground states still in dispute just a week before Election Day.

On Monday evening, shortly before Barrett's confirmation, the Supreme Court rejected a challenge from Democrats in Wisconsin, who were seeking to reverse a lower-court ruling that ballots could be counted only if they are received by Election Day.

The legal fights could affect how ballots are counted -- in particular when it comes to mail-in voting, from when ballots must be received to count to how closely signatures need to match to whether voters can fix ballots that are initially rejected.

In Pennsylvania, a state critical to President Donald Trump's path to victory, the state Republican Party asked the high court last week to reconsider whether the state should count ballots received within three days of Election Day, even if they do not have a legible postmark. The court issued a 4-4 ruling earlier this month denying the GOP challenge and leaving in place a lower-court ruling allowing the ballot receipt extension to stand. Now Republicans want the court to decide the case in an expedited fashion.

There are also lawsuits over the in-person voting process, such as a suit in Michigan seeking to block Michigan Secretary of State Jocelyn Benson's directive to ban open carry of firearms within 100 feet of polling locations.

Some of the last-minute legal maneuvering surrounding the election is typical each presidential cycle, but there's been a higher volume of court fights than normal this year as states have changed voting laws in the wake of the coronavirus pandemic -- and lawsuits have followed.

"An awful lot of it is about whether the rules we've got for normal conditions also apply during a pandemic, and when the world changes, people asked the courts to see whether the election process should also change," said Justin Levitt, an election law specialist at Loyola Law School. "The fights are magnified both volume and ferocity because of the pandemic."

Pennsylvania emerges as a focal point for GOP challenges

In the Pennsylvania case, election law experts say there are several reasons to be skeptical the court would take up the appeal, as courts have been hesitant to change election laws so close to Election Day. Doing so would also raise questions about the court's politicization coming on the heels of Barrett's confirmation eight days before the election.

"We now have another week where the election is taking place and people have been conducting themselves under the belief that as long as ballots are postmarked by Election Day, they're going to be accepted," said Rick Hasen, an election law expert at the University of California, Irvine, and a CNN analyst.

"Voters knew there was a dispute over what the timing was and the Supreme Court declined to get involved. So for the court to get involved now after voters relied on it would be really tough," Hasen added.

Most of this year's major legal battles over election law have already been decided, such as the Trump campaign's unsuccessful effort to block Nevada from mailing an absentee ballot to every registered voter.

But there are still some issues lingering, and there's a likelihood of more lawsuits after the election over the counting of ballots -- especially if the election is close. Election law experts have stressed repeatedly that the courts are unlikely to play a major role in a disputed election like the 2000 presidential contest unless the results are extremely tight and the campaigns are scrutinizing every ballot.

"There is post-election litigation every cycle," Levitt said. "The question isn't will somebody sue after the election -- the answer is yes. The question is will it make a difference?"

The Pennsylvania GOP isn't the only one trying to get an audience with the Supreme Court either. In North Carolina, Republicans are asking the Supreme Court to intervene after a decision by a federal appeals court kept in place rules for "curing" ballots and allowed the counting of absentee ballots up to nine days after the election, as long as they are postmarked by Election Day.

Democrats in Wisconsin had appealed to the Supreme Court to allow ballots received up to six days after the election to be counted, if they were postmarked by Election Day. But the Supreme Court sided with a lower-court ruling on Monday, with the high court's three liberal justices dissenting.

Justice Elena Kagan, quoting an order from the late Justice Ruth Bader Ginsburg, said voters must now decide between "braving the polls with all the risk that entails, and losing their right to vote." The court issued the order just minutes before the Senate voted to confirm Barrett on Monday evening.

Legal battles are playing out in the state courts, too. In Nevada, the Trump campaign and state GOP are seeking to halt the count of mail-in ballots in Clark County, the state's most populous, over how far observers are from vote counters and the tolerance levels of the state's signature matching software. A state judge has scheduled a Wednesday hearing.

The legal skirmishes come as pre-election voting through early voting and absentee ballots has already surpassed the number of early votes cast in 2016. More than 60 million Americans have voted so far, according to a survey of election officials in all 50 states and Washington, DC, by CNN, Edison Research and Catalist.

State officials are urging voters to return mail-in ballots as soon as possible if they're sending them by mail -- because of the risk that they will be delayed and won't arrive by Election Day, which is the deadline for many states. In Colorado, which conducted its election mostly by mail before the pandemic, Secretary of State Jena Griswold said in a statement that Monday was "the last day to return a voted ballot by mail," and people voting later should return them through a drop box.

The percentage of voters who could get caught up in a legal dispute over ballots being received after election day is likely to be small, Levitt said, and would only matter if the race in a state is very thin. But voters can nevertheless avoid taking the chance they become a "Supreme Court statistic" by ensuring their ballot is received by November 3.