With an eye on history, Biden moves on big, bold and progressive infrastructure package 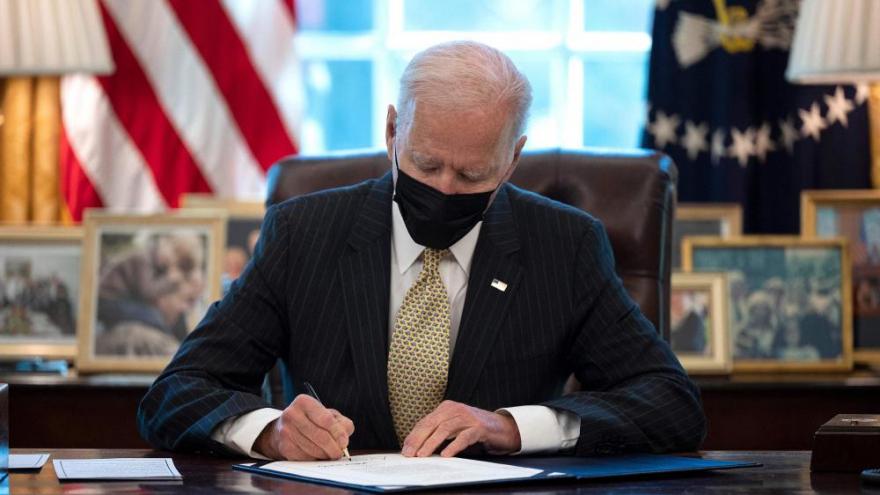 (CNN) -- Every day he works from the Oval Office, President Joe Biden stares across from his desk at the portrait of Franklin Delano Roosevelt he selected to hang above his fireplace.

His aides passed around biographies and historic accounts of the 32nd president before taking over the West Wing, a person familiar with the preparation said.

And Biden consulted a panel of presidential historians in the East Room shortly after taking office, demonstrating what one participant described as a depth of knowledge about not only the architect of the New Deal but another Democrat, Lyndon B. Johnson, whose expansive view of government Biden hopes to emulate.

"It was interesting to hear these historians talk about what other presidents have gone through, and the moments, and who were the people who stepped up to the ball, and who's the people that didn't," Biden said during a CNN town hall last month.

As he travels to Pittsburgh on Wednesday to unveil the next chapter of his massive effort to transform the country though long-sought progressive priorities, Biden is deeply conscious that it is now his moment to step up. He is looking to the bold actions favored by Democrats decades earlier to inform the opening days of his presidency, determined that small steps cannot match the current moment.

Part two of the proposal -- which is likely to include child care, early education and health care funding -- will be announced in April and is still being drafted, though sources said it could come in at roughly the same price tag.

Instead of mimicking the last Democratic administration, in which he served as vice president, Biden hopes to model the more transformational change offered by his acronym'd 20th-century predecessors, FDR and LBJ.

He believes his party has more fully embraced progressive causes since he was last in the White House, according to officials, and thinks the dual health and economic crises caused by Covid-19 have lent an urgency to passing major pieces of legislation. And he has not been shy to point out areas he believes President Barack Obama fell short and where he will strive to be more ambitious.

"He's clearly conscious of being in a big, historic moment," said a senior administration official involved in the President's deliberations over his legislative agenda. "These few months are his best chance to make his mark and he wants it to be one that people will remember for a long time."

Through it all, he has taken lessons from the history books on which of his predecessors met the moment -- and how they went about it.

"It's a matter of timing. As you've all observed, successful presidents better than me, have been successful in large part because they know how to time what they're doing," he said during a news conference last week. "Order, deciding priorities, what needs to be done."

For Biden, that now means a sweeping plan on infrastructure that moves well beyond simply repairing roads, making airports nicer or preventing bridges from falling apart -- though he wants to do that, too.

Instead, Biden views the package as an opportunity to drive the fight against climate change, to strengthen the federal safety net and to make the United States more competitive against China.

Perhaps more than anything, however, he wants to prove a bigger role for government is not a relic of the last century but one that works today.

"I think the President views this as an opportunity to boost American competitiveness," Transportation Secretary Pete Buttigieg said Monday of the President's infrastructure roll-out. "Safe to say we're going to be looking at millions of jobs, and maybe, most importantly of all, a chance to restore America's leadership role, at a time where, right now, we run a very real risk of being left behind because of the cost of disinvestment in our infrastructure."

For Biden, it's a posture relatively few would have predicted he'd hold when he launched his campaign for president. He is, after all, the same man who after a 36-year Senate career and eight years as vice president, made of calling himself a transitional figure inside the party while pushing the idea of long-lost bipartisan comity.

But that same campaign produced some of the most progressive economic policy proposals in a generation -- and officials repeatedly make the point that his policy rollouts largely mimic those far-reaching goals. They also make clear Biden has no intention of backing off of them.

Instead, he envisions a moment -- one where a country ravaged by the pandemic has seen fragilities in the economy exacerbated to a level of unseen hardship -- where he can usher in a transformative era. The acronyms of former presidents who hold that mantle aren't just a messaging strategy, officials say. In the White House, they are embraced by the President himself.

"This is the first time we've been able to, since the Johnson administration and maybe even before that, to begin to change the paradigm," Biden said in March.

Bolstered by a coterie of economic advisers who for years have embraced the idea of dramatically shifting the approach of the federal government, the so-called transitional figure now has clear aims at becoming a transformational one.

Biden's focus on history has caught the attention of some progressive groups. On Tuesday, descendants of FDR -- including his grandson -- and members of the Cabinet that helped enact the New Deal wrote a letter to Biden to "commend your focus on the urgency of big, bold action to create jobs to help America build back better."

Meeting with historians last month at the White House, Biden asked a series of questions about how his predecessors timed their agendas and capitalized on moments, according to a person familiar with the conversation. He appeared knowledgeable about some of the decisions FDR and LBJ faced in enacting major changes over short periods of time, and wanted to know more about what made them successful, the person said.

"Presidents love historians," press secretary Jen Psaki said last week. "I think it's important to learn from what worked and didn't work in the past and gain perspective from people who study that."

One administration Biden doesn't require a historian to scrutinize is the one he served in last. He has been open about the mistakes he believes were made in passing the 2009 stimulus, including a failure to sell its qualities to the American people. Many Biden aides, who also served in the Obama administration, believe perceived concerns from Republicans kept the package too small.

Biden is aiming to pass his sweeping infrastructure and jobs proposal this summer, according to White House officials, setting an ambitious timeline to achieve his next major legislative goal.

If passed, the bill could amount to a transformation of the American economy amid continued recovery from the coronavirus pandemic. So, too, could the way it is paid for advance longstanding progressive goals of shifting tax burdens more on the wealthy and corporations.

The first prong of the White House proposal, which will include more than $2 trillion in spending, will be financed in large part through business tax increases, including raising the corporate rate to 28% from its current level of 21%, and increases in the global minimum tax, the ending of federal subsidies for fossil fuel firms and a requirement that multinational corporations pay the US tax rate.

Internal debates on how much of the proposal to pay for have been ongoing for several weeks, with White House officials keenly aware of potential inflationary risks, officials said. Psaki told reporters the proposal laid out on Wednesday would include mechanisms to finance the entirety of the package over time.

While he entered office vowing to work across the aisle, Biden has shown little more than surface-level interest in hewing to demands from Republicans. Officials do believe infrastructure projects have more potential for GOP appeal and plan to make their case on Capitol Hill.

But they've shown limited interest in dramatically scaling back their ambitions in search of GOP votes when the mechanism exists to pass their package with Democrats alone. From the campaign to now, White House officials have embraced the idea that more than anything else, people just want stuff to get done. That is an animating feature of their push to pass sweeping initiatives -- even when it largely cuts Republicans out of picture.

Biden's first legislative victory was instructive, aides say. While they made no significant effort to trim their initial proposal, Biden reached out to Republicans in both public and private. He will do the same in the coming weeks and months, officials say.

Repeatedly, officials say, polls have shown Biden got credit for bipartisan outreach during the consideration of the Covid-19 relief law. And while he failed to secure the support of a single Republican, that package is now law. It's a lesson, White House officials say, they will not soon forget.