With a jury now in place, the murder trial in the killing of Ahmaud Arbery begins today 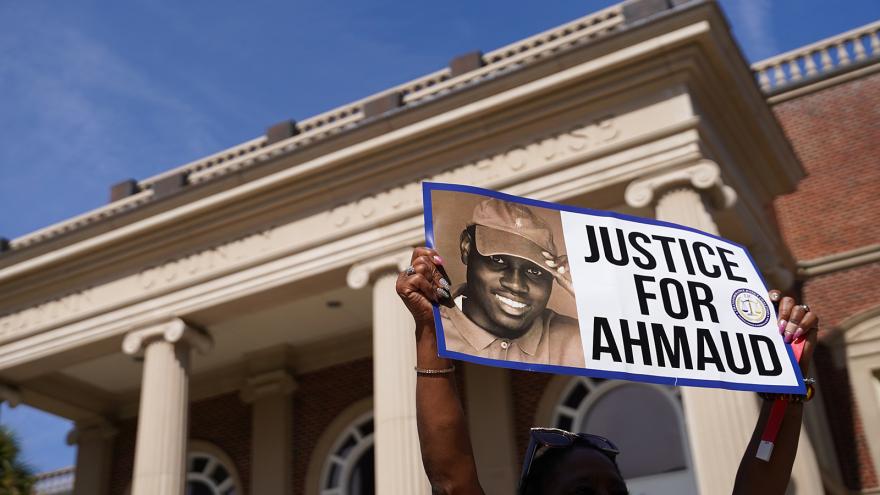 (CNN) -- The trial for the three White men charged in the killing of Black jogger Ahmaud Arbery is set to begin Friday morning, again drawing the nation's attention to the small-town Georgia case in which race has continued to be a central factor.

Jurors -- 11 White and one Black -- selected in a long and grueling process will decide whether Gregory McMichael, his son Travis McMichael and their neighbor, William "Roddie" Bryan Jr., are guilty of malice and felony murder in connection with Arbery's shooting. They also face charges of aggravated assault, false imprisonment and criminal attempt to commit false imprisonment. All have pleaded not guilty.

Arbery, 25, was out for a jog on February 23, 2020, near Brunswick when he was shot and killed. Video of the episode surfaced more than two months later, sparking widespread outrage and demonstrations just weeks before the police killing of George Floyd in Minneapolis set off a summer of nationwide protests against racial injustice.

The McMichaels said they were conducting a citizen's arrest on Arbery, whom they suspected of burglary, and that Travis McMichael shot him with a shotgun in self-defense. Bryan, who recorded a video of the shooting, allegedly hit Arbery with his truck after he joined the McMichaels in chasing Arbery.

The three men were allowed to leave the scene and weren't arrested until after the video of the shooting became public.

About 1,000 people were summoned for jury duty in recent weeks in majority-White Glynn County, where the trial will take place, but less than half turned up.

Among those who did show during two and a half weeks of questioning by attorneys, many said they knew the defendants, had already formed strong opinions about the case or were scared to serve as part of the panel, pointing to the potential consequences specific verdicts may have on the community.

'Appears to be intentional discrimination' in jury selection, judge says

Prosecutors on Wednesday accused defense attorneys of disproportionately striking qualified Black jurors from the jury pool and basing some of their strikes on race.

Judge Timothy Walmsley said the defense appeared to be discriminatory but that the case could go forward.

"This court has found that there appears to be intentional discrimination," the judge said, but ruled there were valid reasons, beyond race, for why Black jurors were dismissed.

In Georgia, the judge said, "all the defense needs to do is provide that legitimate, nondiscriminatory, clear, reasonably specific and related reason," for why they struck a juror and he said the defense met that burden.

"That was devastating," Wanda Cooper-Jones, Arbery's mother, said of the jury selection as she left the courthouse Wednesday evening, adding she was "shocked" there was only one Black juror.

An attorney for Travis McMichael, Jason Sheffield, called the jury selection process "exhaustive" but said he was pleased with the outcome and felt the selected jurors would be fair.

Earlier in the week, Sheffield had echoed another defense attorney's concerns about the low turnout of jurors, saying they didn't "fairly reflect the accused in this case."

That followed earlier comments from defense attorney Kevin Gough, who represents Bryan. Gough told the court Friday that "White males born in the South, over 40 years of age, without four-year college degrees, sometimes euphemistically known as 'Bubba' or 'Joe Six Pack,' seem to be significantly underrepresented."

The day Arbery was killed

Arbery was on a jog in the neighborhood of Satilla Shores, outside the city of Brunswick, when the McMichaels grabbed their guns and pursued him. Gregory McMichael told police they pursued Arbery because they suspected he was responsible for a string of nearby purported burglaries. A local police spokesperson later said there had only been one burglary reported in more than seven weeks before the shooting.

Gregory McMichael, a former police officer and investigator in the local District Attorney's office, told police that Arbery and his son struggled over his son's shotgun before Travis McMichael shot Arbery after the latter attacked him, according to a police report. Bryan joined the pursuit and recorded the shooting on his phone.

Following the deadly shooting, the case lay dormant for more than two months, and two prosecutors recused themselves due to conflicts of interest. But video footage of Arbery's killing surfaced on May 5, 2020, prompting protests and calls for the arrests of the men involved.

Attorneys for the three men said they acted in self-defense. But the opposite was true, Georgia Bureau of Investigation Assistant Special Agent in Charge Richard Dial testified during a preliminary hearing last June.

"I believe Mr. Arbery was being pursued, and he ran till he couldn't run anymore, and it was turn his back to a man with a shotgun or fight with his bare hands against the man with the shotgun. He chose to fight," Dial said.

"I believe Mr. Arbery's decision was to just try to get away, and when he felt like he could not escape, he chose to fight," he added.