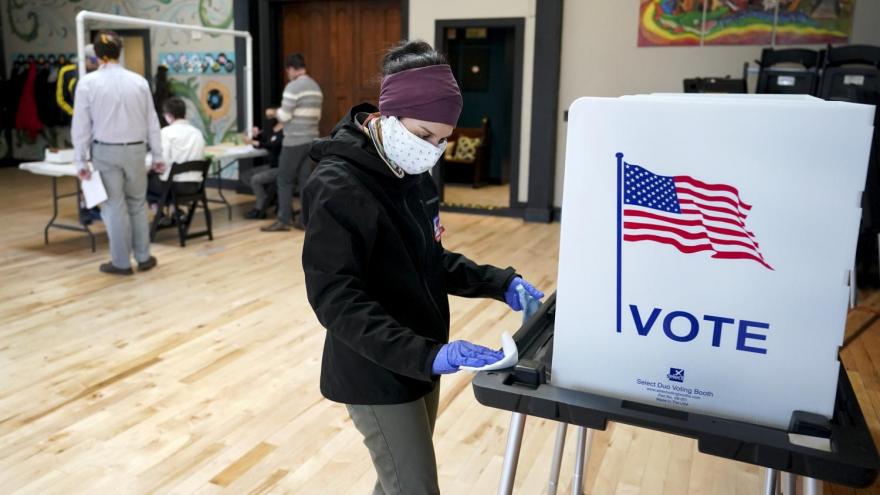 Shanon Hankin, cleans a voter booth after it was used for voting at the Wil-Mar Neighborhood Center Tuesday, April 7, 2020 in Madison, Wis. Voters across the state are ignoring a stay-at-home order in the midst of a pandemic to participate in the state's presidential primary election.

(CNN) -- A conservative justice who lost his bid for reelection to Wisconsin's Supreme Court reversed his recusal from a major case involving the potential removal of more than 200,000 people from the state's voter rolls.

Justice Daniel Kelly, who cited a potential conflict of interest when he sat out the case during his bid for reelection, said Wednesday he will now participate, potentially making him the deciding vote in whether the high court reviews the case.

In an upset for Republicans, Kelly lost to liberal Dane County Judge Jill Karofsky earlier this month in a race for a 10-year seat on the state's Supreme Court. Kelly had recused himself from the case in January, saying it has "the potential of affecting an election in which I am a candidate" in the April 7 election.

The case could have significant implications for November's presidential election. In 2016, President Donald Trump won Wisconsin by less than 23,000 votes, and the state is certain to be a battleground between Trump and former Vice President Joe Biden, the presumptive Democratic nominee.

With Kelly's recusal, the high court had deadlocked, 3-3, in January on whether to take up the case immediately and ahead of an appeals court.

"His final act on the court will be continuing the power grab set forth by Wisconsin Republicans in 2018 as he tries to strip hundreds of thousands of Wisconsinites, who a vast majority of support Democrats, of their right to vote," Wikler argued.

As part of an effort to update rolls, the Wisconsin Elections Commission sent a mailer in October to roughly 234,000 voters who may have moved. The commission said it would not purge them from the active poll list until after the 2021 spring election.

The Wisconsin Institute for Law and Liberty (WILL), a conservative law firm, then sued the commission, arguing that the agency is required by state law to remove from the active voting rolls those who hadn't responded to the mailing within 30 days.

A county judge in December ruled in favor of WILL and instructed the commission to remove the roughly 230,000 people from the rolls.

While the commission appealed the decision and took no action, the judge in January held the commission in contempt. The next day, the Wisconsin Court of Appeals issued a temporarily hold on the judge's order.

In February, the appellate court overturned the judge's decision and ruled that the more than 200,000 voters will officially stay registered. The decision allowed for the thousands of voters to stay on the rolls headed into the state's April 7 presidential primary, which was held in-person amid the coronavirus pandemic.

In March, WILL appealed to the Wisconsin Supreme Court.

"This is a critical matter for our state. Wisconsin voters deserve to have confidence in the integrity of this year's elections," WILL President and General Counsel Rick Esenberg said in a statement in March. "We hope the Supreme Court agrees to review this case and provide clarity on the actions of the Wisconsin Elections Commission."

Kelly's term ends on July 31. With Karofsky sworn in, the conservative majority on Wisconsin's high court will be 4-3.