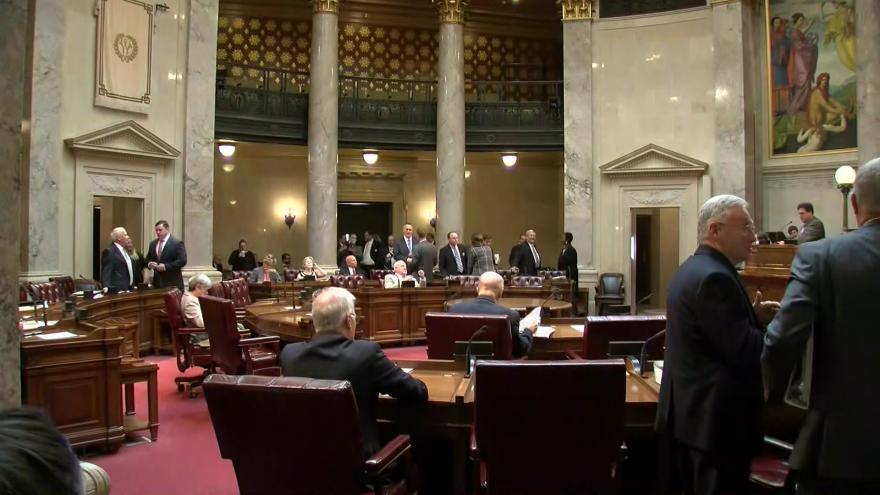 MADISON, Wis. (AP) — The Wisconsin Senate passed the state budget on Friday 11 weeks after it was due thanks to a last-minute deal with reluctant Republicans, sending the $76 billion spending plan to Gov. Scott Walker who promised to make several unspecified vetoes to secure the deal.

It took some late promises and a phone call from Walker, who is in South Korea, to convince three Republican senators to switch from opposition to support of the spending plan. Republicans were one vote short of the 17 needed to approve the $76 billion plan before the deal with Walker was struck.

The Senate voted 19-14 to pass the budget, with all Republicans except Sen. David Craig, from the Town of Vernon, in favor and all Democrats against. Craig, who represents a safe Republican district in the conservative Milwaukee suburbs, had objected to overall spending increases.

Details of the agreement that secured the needed votes were to be released Friday night and center around a list of nine demands the senators had made Wednesday, said Sen. Chris Kapenga, of Delafield.

Those demands from Kapenga along with Sens. Steve Nass and Duey Stroebel included speeding up repeal of the prevailing wage and doing away with a provision that did away with local control over rock quarries that produce material for road and construction work.
Republican Assembly Speaker Robin Vos declared their demands a "ransom note" and refused to consider amending the budget to make the changes. The Senate didn't vote to make any amendments to the budget, either, leaving Walker's veto as the only way to change the spending plan.

Walker said on Wednesday he would be fine with moving up repeal of the prevailing wage from September 2018 to Jan. 1 or earlier. Walker also said he would support finding more savings at the Department of Transportation to win votes for the budget.

Walker could sign the plan and issue vetoes as early as next week. The budget was due on July 1, but current spending continued during the impasse. Wisconsin one of only two states with a July 1 deadline that still doesn't have a budge enacted.

The Assembly passed the budget late Wednesday night and the Senate made no changes to it.

The massive bill dictates spending for K-12 schools, Medicaid, the University of Wisconsin and the rest of state government through June 30, 2019.

Under the plan, property taxes would decrease $23 on the typical home over the next two years, tuition is frozen for two years at UW campuses and K-12 schools would see a nearly 6 percent increase in state funding. Property taxes paid by small businesses would be eliminated.

The budget also eliminates the alternative minimum tax, which primarily benefits the wealthy, raises fees on hybrid and electric cars and borrows $400 million for roads but doesn't find a long-term funding solution to keep construction projects on track.

Democrats called the budget a failure, saying Republicans didn't do enough to help schools, roads and the working class and instead prioritized the wealthy. All Democratic amendments, which they argued made the budget more fair, were rejected.

"It's shameful, this budget," said Democratic Sen. Lena Taylor, of Milwaukee, a member of the Legislature's budget committee. "There's no other way to put it."