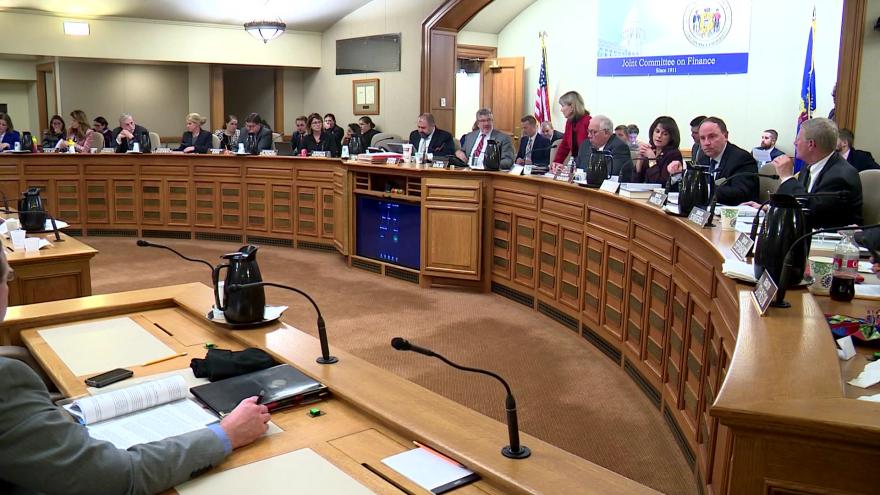 Wisconsin Republicans, just weeks away from losing control of both the governor and attorney general's offices, planned dramatic lame-duck votes Tuesday on a sweeping attempt to limit the powers of incoming Democrats, a move that opponents decried as a last-gasp power grab and attempt to invalidate the election.

Another Republican proposal to move the 2020 presidential primary election from April to March appears to be dead. A Republican-controlled committee did not advance the plan Monday, and the panel's co-chairs said it didn't have enough votes to pass.

Once approved by the Legislature, the other measures would head to Republican Gov. Scott Walker for his signature just five weeks before he is replaced by Democrat Tony Evers. Republicans maintained majority control of the state Legislature in the November election, and thanks to the rare lame-duck session, Walker has a chance to leave one final mark on the state after losing his bid for a third term last month.

The Wisconsin maneuvering is similar to what Republicans did in North Carolina two years ago and to what is being discussed in Michigan before a Democratic governor takes over there. The bills were moving quickly in Wisconsin, having just been made public late Friday afternoon.

They also sparked protests at the Capitol reminiscent of the raucous demonstrations that resulted when Walker all-but eliminated collective bargaining for public workers in 2011. Those protests were massive and lasted weeks, but Republicans were poised Tuesday to complete their work much more quickly.

Republican Rep. John Nygren, co-chair of the committee, downplayed the lame-duck proposals and said the goal was to establish balance in power between the Legislature and governor. Nygren said it was a positive step that would "bring us together to solve the problems of the state."

Walker signaled support for the moves Monday, and his office has been working with Republicans on crafting the package. But Evers called the unusual lame-duck session "rancor and politics as usual." The last lame-duck session in Wisconsin was in 2010 when Democrats tried unsuccessfully to enact labor agreements.

Republicans had proposed moving the date of the 2020 presidential primary to improve the chances of a conservative Supreme Court justice, who was appointed by Walker and is on the ballot that year. But election clerks objected, citing the $7 million cost and logistical challenge of holding a third election within a two-month period.

It didn't even get a vote in the committee. Republican committee co-chairs said after the meeting that it didn't have votes in the Senate to pass.

The remaining proposals would weaken the governor's ability to put in place rules that enact laws and shield the state jobs agency from his control. Republicans also want to limit early voting to no more than two weeks before an election.

Other measures would weaken the attorney general's office by allowing Republican legislative leaders to intervene in cases and hire their own attorneys. A legislative committee, rather than the attorney general, would have to sign off on withdrawing from federal lawsuits. That would stop Evers and Kaul from fulfilling their campaign promises to withdraw Wisconsin from a multi-state lawsuit seeking repeal of the Affordable Care Act.

They made opposition to that lawsuit a central part of both of their campaigns and handcuffing their ability to get Wisconsin out of the case has fueled Democratic arguments that Republicans are trying to invalidate the will of voters.

Opponents have said many of the changes would likely be challenged in court, a process that could create even more gridlock in state government next year.

Sweeping proposals to weaken the incoming governor and attorney general in Wisconsin have been advanced to the full Legislature for approval.

But the Republican-controlled committee around midnight Monday night did not advance a bill to change the date of the 2020 presidential primary, a move that would cost millions and drew widespread opposition from election officials.

That means that measure is all but dead.

The other proposals give outgoing Republican Gov. Scott Walker a final chance to reshape Wisconsin law before he leaves office next month.

Opponents cast them as a last-gasp power grab and attempt to invalidate the November election.

Committee approval sets up dramatic votes on the other measures Tuesday in the Senate and Assembly.

Other changes would limit early voting to two weeks and allow the Legislature to replace the attorney general when defending state laws.

Walker stopped short of promising to sign the bills, but also didn't threaten a veto or call on lawmakers to stand down.

Walker's office has been working with Republican leaders on the proposals.

The package would move the primary from April to March, creating three elections in eight weeks.

Walker told reporters Monday that it's possible to hold so many elections in such a short window and he's always found it strange to hold a partisan primary during a general election that's nonpartisan.

He also signaled support for other bills in the package that would weaken the governor and attorney general's offices.

Democratic Wisconsin Gov.-elect Tony Evers says a Republican attempt to weaken the governor's powers before he takes office is "rancor and politics as usual."

The bills would move the 2020 presidential primary date, limit the governor's power to put in place rules enacting state laws and weaken powers of the attorney general.

Evers says the proposals "are unfettered attempts to override and ignore what the people of Wisconsin asked for this November."

He says it "flies in the face of democratic institutions."

Evers and other Democrats have threatened lawsuits.

Two dozen Wisconsin health care providers, insurance companies and others in the industry are asking legislators to drop changes affecting Medicaid that Republicans offered in a lame-duck session.

The letter Monday was signed by the most powerful health care organizations in the state including the Wisconsin Medical Society, the Wisconsin Hospital Association, UW Health and the Medical College of Wisconsin.

The groups say they were not included in the process of developing the bill introduced Friday that could win final approval Tuesday.

The health care groups say the changes proposed were "far too complex for the expedited timetable" and could have unintended consequences.

Republicans have said they want to enact changes to Medicaid, including a work requirement, that Gov. Scott Walker recently received federal approval to do.

Wisconsin Republican Senate Majority Leader Scott Fitzgerald says there aren't enough votes in the Senate to approve every proposal being offered in the lame-duck legislative session, but he wouldn't say that any of them are dead.

Fitzgerald and Republican leaders told reporters Monday before a public hearing that several of the ideas, including moving the 2020 presidential primary, remain a work in progress.

Most of the state's county election clerks are opposed to the primary date change, citing the $7 million cost and logistical difficulties.

But Fitzgerald says he's not willing to say whether there are enough votes to do it.

Hundreds of people protested both inside and outside the hearing room, banging on the doors and chanting "Respect our votes!"

The Wisconsin Elections Commission is warning state lawmakers that moving the state's 2020 presidential primary would be "extraordinarily difficult."

A sweeping package of GOP lame-duck legislation up for votes Tuesday includes a plan to move the primary from April to March. The move is designed to ensure that conservative state Supreme Court Justice Dan Kelly doesn't face a Democratic wave when he comes up for re-election in April. State elections workers would have to run three elections in three months.

Commission staff handed the panel a memo Monday concluding the switch could cost at least $7 million and create a logistical nightmare for local clerks.

The commission unanimously adopted a motion Monday to send written testimony to legislators saying the move would create multiple conflicts, be "extraordinarily difficult" and may not be feasible. The testimony goes on to state the commission is concerned about costs and complains that the legislation provides no additional funding.

Wisconsin Democratic lawmakers say a Republican lame-duck session is an unprecedented attempt to take away powers of the incoming governor and attorney general.

Members of the Legislature's budget committee spoke to reporters Monday ahead of a public hearing on the package of proposals. The bills give outgoing Republican Gov. Scott Walker one last chance to enact laws before he's replaced by Democratic Gov.-elect Tony Evers.

Democratic state Sen. Jon Erpenbach calls the lame-duck session a "power grab." He says Republicans are upset they lost every statewide race in November. Erpenbach says, "They lost and they're throwing a fit."

The Republican-controlled budget committee planned to vote on the bills after a hearing Monday, setting up votes in the state Senate and Assembly as soon as Tuesday.

Wisconsin Democrats are warning that a Republican bill to limit early voting is designed to suppress turnout by Democratic voters and contradicts a court ruling that already struck down the idea.

One Wisconsin Executive Director Scot Ross said Monday the Republican measure shows the GOP "refuse to accept the results of the 2018 elections" after losing six statewide races, including the contest for governor.

One Wisconsin successfully sued to strike down a previous Republican effort to limit early voting. Ross says Republicans believe they lost last month "because too many people voted."

About 565,000 people voted early in the November elections.

The bill is one of several Republicans plan to take up during a lame-duck session starting Monday. Others include limiting the power of incoming Democratic Gov. Tony Evers.

A Democratic member of the Wisconsin Elections Commission is calling a Republican plan to move the presidential primary a huge waste of money.

The GOP has introduced sweeping lame-duck legislation that would weaken the governor and attorney general's offices. The bills also would shift the 2020 presidential primary from April to March to protect conservative Supreme Court Justice Dan Kelly from a potential Democratic wave in April.

The move would create three elections in three months. Clerks say it's logistically impossible and would cost at least $7 million.

The Elections Commission discussed the measure Monday. Commissioner Mark Thomsen, a Democratic appointee, called the idea the "biggest waste of money for a single person that I can think of."

Wisconsin Republicans are forging ahead with a rare lame-duck session giving outgoing Republican Gov. Scott Walker a chance to limit the powers of his incoming Democratic successor.

Other bills would move the 2020 presidential primary date to benefit a conservative state Supreme Court justice, limit early voting and reduce the power of the incoming Democratic attorney general.

A Republican-controlled legislative committee planned a public hearing Monday, immediately followed by a vote, setting up approval in the state Senate and Assembly on Tuesday.

Democratic Gov.-elect Tony Evers is decrying the lame-duck session, calling it an attempt to invalidate the results of November's election.

He is vowing to fight it, saying lawsuits are being explored, and called on the people of Wisconsin to contact their legislators even as the bills were speeding through.