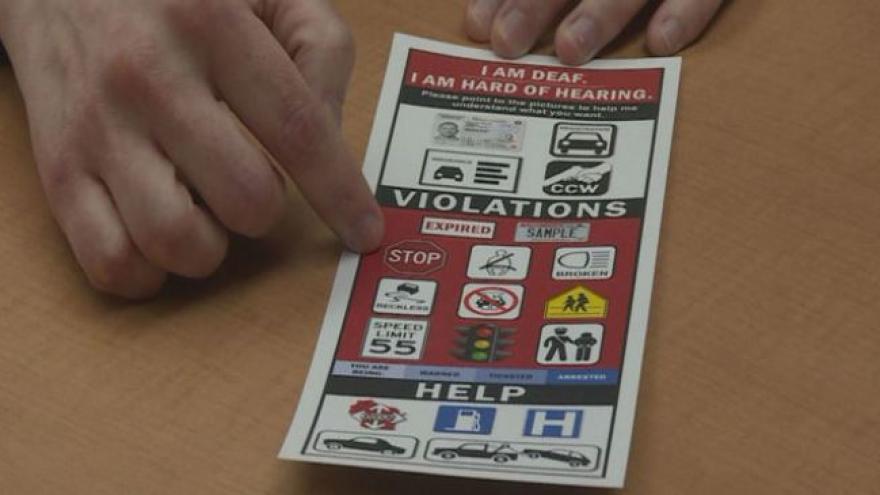 MADISON, Wis. (WISC) -- The Wisconsin Office for the Deaf and Hard of Hearing is giving the community a new resource to make interactions with police officers easier and safer.

The new communication visor card is free and available to anyone. It gives law enforcement and deaf or hard of hearing drivers a tool to clearly communicate what the driver did wrong and the accommodations they need.

"The nice thing about is it's visual. It really lets the officer know that the driver is deaf or hard of hearing. Because hearing loss is invisible, so you can't tell right off the bat," said Carolina Ludka, a deaf and hard of hearing specialist.

In the past, communication between law enforcement and people who are hard of hearing has lead to dangerous and even deadly situations.

In Aug 2016, a trooper in North Carolina, killed deaf motorist Daniel Harris, 29, when he failed to pull over during a traffic stop.

Ludka doesn't want to see an incident like this happen in Wisconsin.

She said communicating with law enforcement in the past has been rough for her. Although she speaks well, it is difficult for her to hear.

"I actually had to take the hearing aid out and show it to him, that yes, I am an individual with a hearing loss. So with this tool wouldn't have to do that," said Ludka.

After a year and a half of hearing feedback from the community, the cards are ready to be mailed out.

They include pictures to indicate a broken taillight, expired license plate tags, reckless driving and even the need for a tow truck.

The card should be placed on the visor, allowing the driver to show the officer their hands as they retrieve it.

Ludka said she hopes the Department of Motor Vehicles will soon begin offering the cards. More than 500,000 people in Wisconsin are deaf, hard of hearing and/or deaf-blind.

Since their release, many police officers have requested a card and training on how they can communicate better with the deaf community.

The Fond Du Lac county Sheriff's Office has set a goal of putting one card in each patrol car.