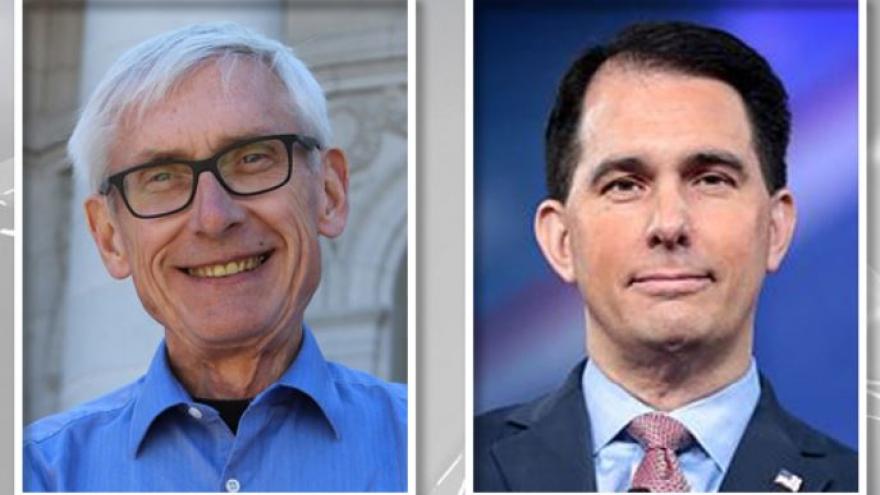 Walker's campaign on Wednesday asserted that if elected Evers would raise taxes by billions of dollars. Evers' campaign spokesman Sam Lau responded by saying, "Scott Walker is just making stuff up at this point."

Walker has keyed in on taxes as a central issue with the election less than three weeks away and polls showing the race is a tossup. While Evers has been vague about some of his plans for raising taxes, Walker has also not outlined in detail how he would pay for hundreds of millions of dollars in additional spending and tax cuts he's proposed.

Evers has made two concrete tax-related proposals. He wants to repeal the manufacturing and agriculture tax credit program created by Walker and supported by the state's business community to pay for a $340 million, 10 percent income tax cut for the middle class. Evers launched a new ad touting the tax cut Wednesday.

Evers has also said that "everything's on the table " when it comes to paying for roads, including a gas tax increase.

Walker has zeroed in on that comment, saying because Evers wouldn't initially rule out a $1 per-gallon increase that means he's open to it. Evers has subsequently said a $1 per-gallon increase would be "ridiculous." Such a tax increase would raise $6.7 billion — enough to create and operate a second state Department of Transportation, which currently runs on a budget that size that includes federal funding and bond money.

Yet Walker has keyed in on that number, including in a new campaign ad Wednesday featuring a mom saying she couldn't afford Evers as governor because "he's going to raise the gas tax by up to a dollar per gallon."

Walker campaign spokesman Brian Reisinger, in a conference call with reporters, said if the $1 per-gallon increase isn't realistic, then Evers should give a range of what he would consider.

While Evers has not stated a range, Walker hasn't said specifically how he would pay for his proposals to increase state funding for schools to two-thirds of expenses or bolster local road funding by about $110 million annually.

Walker also wants to spend $30 million more on worker training; approve a tax break for Kimberly-Clark Corp. that could cost tens of millions of dollars; give new college graduates tax credits of $1,000 a year for five years if they stay in Wisconsin; expand a property tax credit for senior citizens; and provide a tax break for child care costs.

The two-thirds education funding increase would be roughly $130 million a year, according to the nonpartisan Legislative Fiscal Bureau, but Walker's campaign has refused to put a dollar amount to it or say exactly where the money would come from.

"Good fiscal management and a strong economy puts us in position to do this kind of thing," Reisinger said. He stressed that Walker has shown over eight years as governor that he follows through on promises, while Evers has "no proven track record of getting things done."

Evers, the state superintendent since 2009, last month submitted a budget proposal that would increase funding for schools by 10 percent and include two-thirds funding. But his proposal leaves it up to the governor and Legislature to figure out how to pay the $1.4 billion increase in spending.