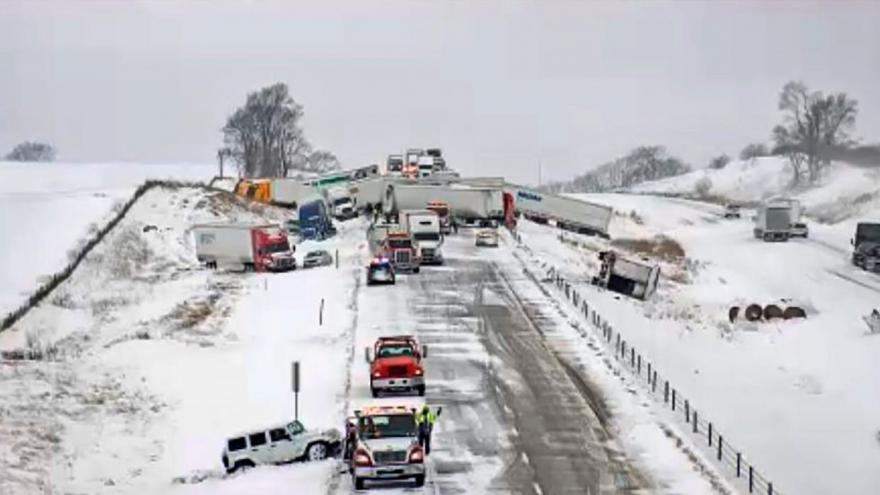 This image provided by the Iowa Transportation Department from a traffic camera shows a massive pileup on Interstate 80, Thursday, February 4, 2021, west of Newton, Iowa.

(CNN) -- Thursday brought havoc to the roads in Iowa and left dozens of people stranded by ice floes in Wisconsin, with a powerful winter storm showing no signs of abating in the Midwest.

Whiteout conditions along Interstate 80 west of Newton, Iowa, led to a 40-vehicle pileup there, the state patrol said Thursday afternoon.

Troopers, who weren't injured, were "going vehicle to vehicle to check on occupants," the state patrol said on its Facebook page. There were a "few serious injuries and several minor injuries," the post said.

Photos posted by the state patrol also showed tractor trailers turned on their side or jackknifed, along with other cars and trucks, including State Trooper cars.

In Door County, Wisconsin, 66 ice fishermen were rescued by the US Coast Guard on Thursday after they became stranded on an ice floe near Sturgeon Bay, according to a Facebook post from US Coast Guard Air Station Traverse City.

The fishermen became trapped when the ice broke away from land, the post said, and high winds pushed the floe away from shore. As first responders worked to rescue the fishermen, the ice continued to crack in smaller sections.

Helicopters conducted flyovers of the area until all the fishermen had been extracted, the Coast Guard said.

Thursday was a "curtain-raiser" for what the area is in for in the coming days, according to CNN Meteorologist Derek Van Dam.

Snow, forecast through Friday, is expected to be followed by a flash freeze, or rapidly falling temperatures.

It may get so cold overnight Saturday into Sunday that even car antifreeze may solidify, according to Van Dam.