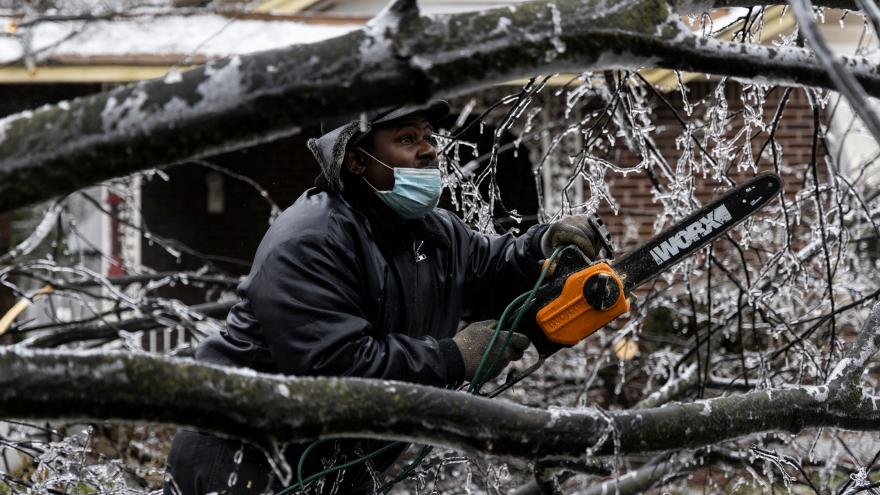 (CNN) -- A sprawling winter storm that blanketed the central and southern US with ice and snow left hundreds of thousands in the dark before making its way toward the Northeast, promising more disruption Friday.

More than 95 million Americans were under winter weather warnings or advisories as of Friday morning, and thousands of flights had been canceled.

The storm is expected to deliver a mix of ice, sleet and freezing rain to major cities, including New York City and Boston beginning early Friday -- though the cities aren't expected to see heavy snow.

Still, forecasters are warning road conditions could be dangerous, including in portions of eastern Rhode Island and northeastern New Jersey.

Similar conditions in the central and southern US on Thursday led to the deaths of at least three people.

In New Mexico, two people died in weather-related crashes. Another person died in Alabama during what forecasters determined was a likely tornado.

More than 3 feet of snow piled up in one part of New Mexico. In the Midwest, more than a foot of snow fell across several states, with some areas in the Chicago metro area experiencing as many as 11 inches, forecasters said.

The expansive system -- whose reach was projected to span about 2,000 miles from the Rockies to New England -- also created an ice storm that brought dangerous conditions from Arkansas through Ohio.

It led to power cuts for nearly 300,000 homes and businesses across Ohio, West Virginia, Pennsylvania, Texas and Tennessee, according to PowerOutage.us.

Roughly half of the outages were in Tennessee, which also saw piling ice and threats of flooding. The Tennessee Emergency Management Agency said it expects outages and travel issues to persist into Friday.

Meanwhile in Texas, more than 15,000 homes and businesses were in the dark as of 4:30 a.m. Friday, according to PowerOutage.us.

The state's power grid is under scrutiny following last year's disastrous ice and snow storms that left thousands freezing due to power outages. This time, state leaders asserted the grid was prepared to handle the storm.

Gov. Greg Abbott said in a briefing Thursday that the grid has "plenty of power available at this time," calling the weather "one of the most significant icing events that we've had in the state of Texas in at least several decades."

The storm's path as it heads Northeast

More than 80 million people in the Northeast were under winter weather alerts early Friday.

The interior parts of the Northeast were expected to see heavy snowfall Friday while major cities face the threat of freezing rain and sleet, according to CNN meteorologist Robert Shackelford.

New York City and Boston are under a winter weather advisory until 7 p.m. Friday for freezing rain and sleet, respectively. Both cities, hit hard by heavy snow during last week's powerful nor'easter, could experience ice piling up to a tenth of an inch. Parts of northeastern New Jersey are expected to see similar conditions.

The dangerous road conditions are expected to make travel difficult Friday, the NWS said, as it warned that power outages are also possible.

Ice projections are higher in Providence, Rhode Island, and sleet may pile up to a tenth of an inch.

"The interior parts of New England will mainly see snowfall, with northeast New York, northern Vermont, northern New Hampshire, and much of Maine will see over a foot of additional snowfall," Shackelford said.

Rochester, New York, had already experienced 10 inches of snowfall and is under a winter storm warning until 1 p.m. Friday, with the possibility of another 4 to 8 inches.

In the South, 10 million people are under flood watches across parts of North Carolina, Georgia and Alabama. And over 25 million are under wind chill alerts in parts of Texas, Oklahoma, New Mexico, Kansas and Colorado -- most of which are lasting through noon Friday.

There were notable records set on Thursday:

The steady rainfall led to flash flood warnings or flood watches in parts of Alabama, Georgia, South Carolina and Tennessee.

In Alabama, there were tornado watches in 14 counties, and the National Weather Service said it observed a tornado in Elmore County in east-central Alabama.

The other two reported storm-related deaths were in New Mexico. One person died when a vehicle slid off a snow-covered road and flipped over 100 feet down a mountain in Bernalillo County while a man was killed in a chain-reaction crash on Interstate 40 in Guadalupe County, officials said.

The storm also wreaked havoc on air travel on Thursday, when more than 6,400 US flights were canceled, according to aviation tracking site FlightAware. American Airlines said the storm had significant impacts on its operations at Dallas-Fort Worth International Airport.

Already, more than 2,600 flights have already been canceled for Friday within, into and out of the US, FlightAware said.