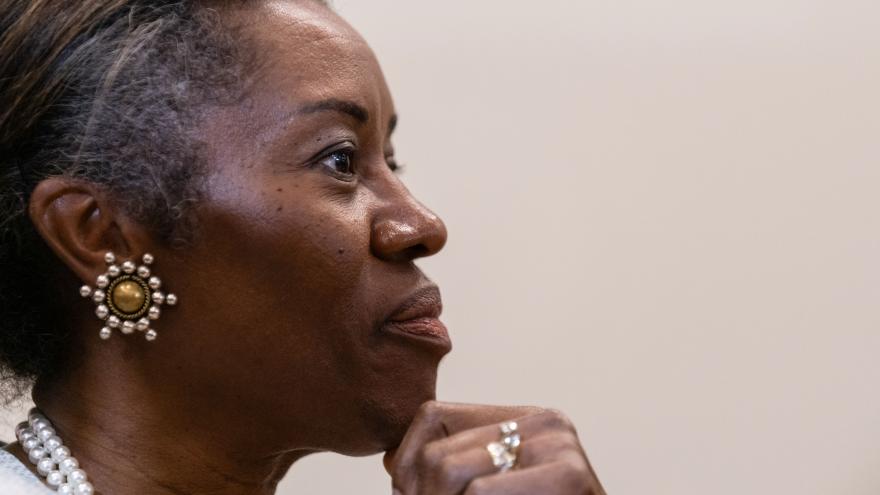 (CNN) -- Winsome Sears, a conservative Republican, will be Virginia's next lieutenant governor, breaking barriers as the first female and the first woman of color in the office in the commonwealth's 400-year legislative history.

Sears will serve alongside Republican Glenn Youngkin, whom CNN projected would win the Virginia gubernatorial race.

Sears, who was born in Jamaica, is the first Black Republican woman to be elected to the Virginia General Assembly, representing the 90th district from 2002 for one term. In 2004, she launched an unsuccessful bid for Congress against Democrat Rep. Bobby Scott. She is also a Marine veteran, former vice president of the Virginia Board of Education and owner of an appliance business. She is a wife and mother of three daughters. In 2012, her 27-year-old daughter DeJon L'Air Williams and two grandchildren died in a car accident.

"It's a historic night -- yes, it is -- but I didn't run to make history. I just wanted to leave it better than I found it," Sears said before a crowd of supporters early Wednesday morning.

She was national chair of Black Americans Making America First, a coalition that promotes initiatives by former President Donald Trump and has defended him after controversies and racist comments. Asked about her support for Trump, Sears told CNN, "I am an independent thinker" and promised to ensure "more diverse representation is appointed on boards and commissions." She also said she would increase funding for Historically Black Colleges and Universities.

In general, Sears has downplayed the influence of race on her political outlook and touted the progress of equality for Black Americans, but has also acknowledged that there is more work to be done.

"There is no Census Bureau category called 'of color.' I am Black. Virginians are ready for strong, principled and sensible leaders who will serve them -- no matter one's color," Sears previously told CNN when asked the importance of being the first woman of color as lieutenant governor.

She reiterated that progress Wednesday morning, touting the elections of former President Barack Obama and Vice President Kamala Harris, who also broke barriers and made history.

"In case you have not noticed, I am Black and I have been Black all my life. But that is not what this is about. What we are going to do is we are going to now be about the business of the commonwealth. We have things to tend to," she said, which includes fully funding historically Black colleges and universities and mentioning Youngkin's plans for the state. "We're going to have safer neighborhoods, safer communities and our children are going to get a good education."

Her ascension to the second-highest office in the state culminates the end of a nationalized and close gubernatorial race where she and Ayala were split on several issues, including vaccine and mask mandates. It also comes amid the aftermath of a racial reckoning over police brutality and Confederate imagery, a shadow of its dark past stained with slavery.

The election of a woman as lieutenant governor in the state takes place nearly two years after the state's legislature elected its first female speaker of the House.

Along with the closely watched gubernatorial race, which was widely seen as a bellwether as President Joe Biden won Virginia by 10 percentage points last year, the commonwealth is also garnering national attention as a civil trial is underway regarding organizers of the deadly "Unite the Rally" in Charlottesville four year ago, fueled by the city's decision to remove a Confederate statue.

Sears would not say whether she supports the removal of Confederate monuments when asked by CNN, though she has previously criticized Republicans who embraced the Confederate flag. Instead, Sears emphasized the progress made by Black people in her lifetime when asked about race relations in the commonwealth.

"We have a saying in church, 'I may not be what I'm supposed to be, but I ain't what I used to be.' And that's America," Sears said. "We are not back in 1963, when my father arrived at the height of the Civil Rights Movement and things were very bad for us as Black people."

"Are there changes that need to be made? Most assuredly," Sears added. "There is no country in this world that does not suffer from racism. ... But you have seen people who are dying to cross the border into America because they know that if they can get their foot on American soil, the trajectory of their lives will change -- as it did for my father."

While Ayala was open about being fully vaccinated and backed mask mandates in certain settings, Sears has refused to say whether or not she is vaccinated, opposes vaccine mandates and called for an end to the state's mask mandate earlier this year. She has encouraged people to get vaccinated but said "no one should be forced to disclose their vaccination status."

During the campaign's last weeks, there was fiery debate over how race should be taught in Virginia's public schools, particularly over the teaching of "critical race theory," a concept that examines the extent to which longstanding systems in America have led to unequal outcomes for people of color. Although the state's Department of Education denies that CRT is taught in public schools, the debate emerged as a key issue and is the latest flashpoint in Republican-promoted culture wars.

Sears has called the concept "racist" but also said the good and bad of American history should be taught.

"If Critical Race Theory means that telling a child that once you emerge from the womb you are a racist and a colonizer and whatever else, that's not going to be good. That's going to create morale problems for everybody," Sears told the Virginia Mercury in August. "If we're going to teach about African American history, why just keep it to one month? Let's teach it throughout. Let's talk about these things. You can't escape history. Let's talk about the good, the bad and the ugly."

As the debate over teaching America's dark past continues across the country, the legacy of last year's protests over racial justice has also renewed national debates about policing, crime and gun violence, particularly in Virginia, which is still reeling from the 2019 Virginia Beach shooting that left 12 dead.

Sears has vowed to protect gun rights, opposes red flag laws, has voiced support for law enforcement and spoke of the need for "our police, Sheriff, corrections officers to keep our families and our neighborhoods safe." She told CNN she would work with law enforcement and families who have experienced gun violence to "develop workable solutions" to balance her support for gun rights and stem gun violence.