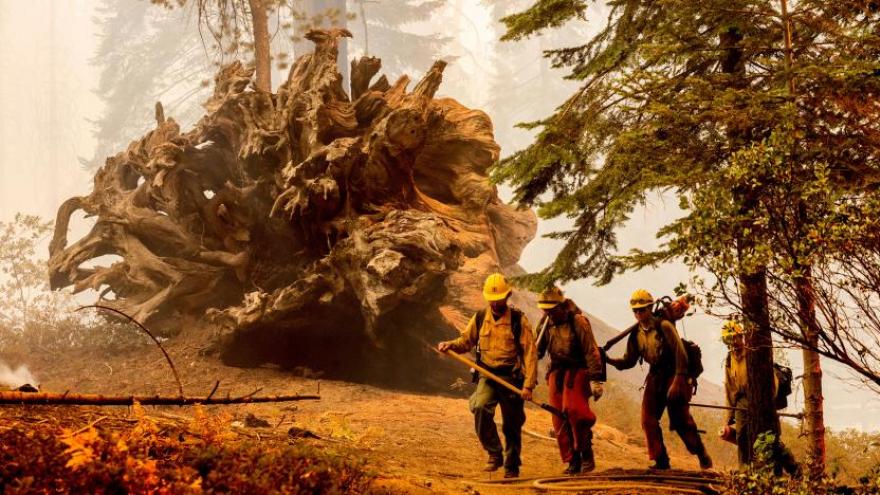 Firefighters battle the Windy Fire as it burns in the Trail of 100 Giants grove of Sequoia National Forest on September 19.

(CNN) -- The Windy Fire in California is wreaking havoc on sequoia trees in Sequoia National Forest this week. Experts say fire has killed at least 29 of the giant trees, which can live for thousands of years.

That toll is only an early assessment.

Garrett Dickman, a wildfire botanist with Yosemite National Park, has been tasked with preparing the trees as the wildfire encroaches on sequoia groves, then working to cool the trees after the fire burns through. Part of his job is assessing the trees to see how they fared after the flames move away.

While the assessment is just beginning, there's already grave concern. The center of Long Meadow Grove managed well, thanks to work crews did in preparation for the fire, but moving away from that area, Dickman counted 29 sequoias that were "just incinerated" by the blaze.

"There were four of those that had burned so hot that they'd fallen over," Dickman said, adding one tree burned so badly that it was nearly reduced to just an outline of a tree on the ground.

"The majority of the grove is going to survive," Dickman said, "but there are portions that burned so hot and those trees won't make it."

Elsewhere in the forest, Dickman has seen even more devastation. In Starvation Creek Grove, which he says has no modern fire history, he said he saw only "a couple of trees survived."

"It was one of the groves where we got a few hours of prep work and those trees that we did the emergency prep work around, from the picture, they are the ones that did survive and all the rest of them -- it doesn't look promising," Dickman said, adding that he plans to assess the grove in the next few days.

Only found in California's the Sierra Nevada, giant sequoia trees are capable of living for more than 3,000 years and soaring to more than 200 feet high. But 10% to 14% of the world's giant sequoias were lost in the 2020 Castle Fire alone.

As wildfires continue to burn longer and hotter amid unrelenting drought, there's concern that this year's fires could do far more devastation. The drought has made trees and brush dry and brittle -- easy for wildfires to burn through.

"Those fuels are on the ground and the fuel is dry," Dickman explained. "You can buy a two-by-four from Home Depot and it has more water in it than the trees there on the ground. When they burn, it's 100% consumption."

As the assessment of the trees continue, so does the fire fight. The US Forest Service is putting together a task force to go into the sequoia groves and scrape around the base of the trees, and to put out fire still burning in some of the trees' root systems. For example, a couple of smokejumpers, specially trained wildland firefighters, are scaling the iconic Bench Tree in the Trail of 100 Giants to attack a fire in the canopy of a nearby tree.

"They're going to climb that tree ... with a hose and squirt over to the other tree and try to put that thing out," said Nathan Judy, public affairs officer for the US Forest Service.

As for the potential loss of sequoias, Dickman says he's not sure yet whether this fire season will end up being as devastating as last year was for the giant trees.

"After the Castle Fire, I think we have to brace ourselves for something that could be much worse," Dickman said, noting that some of the groves will experience new growth. "There's a difference between a 2,000-year-old tree and one that's 15 years old -- like one's a landscaping plant and one is just like a spiritual experience."