William Shatner is about to be the oldest person ever blasted into space. Here's everything you need to know 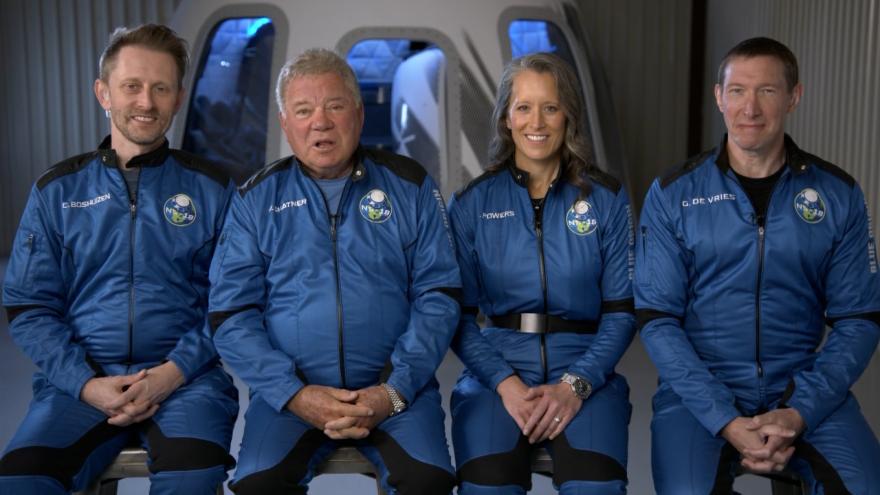 (CNN) -- William Shatner — who gained international fame playing the iconic role of Captain Kirk on "Star Trek" — will make a very real trek to outer space today, if only for a brief suborbital joyride aboard a New Shepard rocket. It's the same one that took Amazon billionaire Jeff Bezos to space this summer.

Shatner, 90, is set to become the oldest person ever to travel to space, though his spacecraft won't be equipped with warp drive, transporters, or shields. He'll be blasting off onboard a New Shepard spacecraft — the one developed by Bezos' rocket company, Blue Origin — alongside three crewmates: Chris Boshuizen, a co-founder of satellite company Planet Labs, and software executive Glen de Vries, who'll both be paying customers, and Audrey Powers, Blue Origin's vice president of mission and flight operations.

Their flight is slated to take off from Blue Origin's launch facilities in West Texas at 8:30 am CT on Wednesday, a 24-hour delay from the original schedule due to rough winds in the area.

A joyride aboard a Starfleet spaceship, it will not be. Rather, the group will strap themselves inside a capsule that sits atop Blue Origin's 60-foot-tall New Shepard rocket, which will soar up to about three times the speed of sound and reach more than 62 miles high before coming immediately back down to Earth. From beginning to end, the trip will take about 10 minutes.

It will mark the second of what Blue Origin hopes will be many space tourism launches, carrying wealthy customers and thrill seekers to the edge of space. Though, Bezos is a vocal Star Trek fan, and Shatner will be flying as a guest, free of charge.

Here's everything you need to know.

Blue Origin has conducted more than a dozen uncrewed test flights of New Shepard, and Bezos decided to put himself on the first-ever crewed flight in July — in part to demonstrate that he trusts his own life with Blue Origin's technology.

This Blue Origin flight will make Shatner the oldest person ever to travel to space, beating the record set just a few months ago by 82-year-old Wally Funk, who was a former astronaut trainee but was previously denied the opportunity to fly before she joined Bezos on the July flight of New Shepard.

Blue Origin has billed New Shepard as a spacecraft that virtually anyone can fly on with only a few days of light training. Though the vehicle will put the passengers through intense G-forces as it blasts upward and returns back toward Earth, the ride won't be nearly as intense as orbital flights like the one that SpaceX recently operated for four space tourists, which requires far faster speeds and a nail-biting reentry process.

(Read more about suborbital vs. orbital flights and the somewhat arbitrary attempts at defining where "outer space" begins here.)

On Blue Origin's website, it states the following criteria for passengers:

Still, spaceflight is inherently risky. Drumming up enough speed and power to defy gravity requires rockets to use powerful, controlled explosions and complex technology that always involves some uncertainties.

From a physiological perspective, however, Shatner's age shouldn't be an issue, according to Dorit Donoviel, the executive director of the Translational Research Institute for Space Health (TRISH), a Baylor College of Medicine-led research group that partners with NASA.

Donoviel pointed to a seriesofstudies in which people with pre-existing medical conditions, including elderly men with heart conditions, who experienced up to 6Gs in a spinning centrifuge to simulate the crushing forces the body is put through during spaceflight.

"They were perfectly fine," Donoviel said. "The only thing — medical condition — that was of concern when they did those studies was really anxiety and definitely claustrophobia."

Blue Origin passengers could experience up to 5.5Gs, which can also make it difficult to breathe or move their hands and arms. But they won't have the stress of piloting New Shepard, which is fully autonomous, so they can basically just sit there and wait out the most stressful portions of the journey.

One thing that is absolutely crucial for them, however, is to get back in their seats as soon as mission control warns the passengers that the capsule's three minutes of weightlessness are about to be over. As the spacecraft begins falling back to Earth, and the crushing g-forces return, passengers who aren't strapped into their seat and oriented in the proper position could risk serious injury.

"If they're facing the [wrong] way, the g-forces could pull all the blood away from the head and go down to the feet, in which case the person would pass out," Donoviel said.

This spaceflight also comes as Blue Origin is facing backlash from a group of 21 current and former employees — including senior engineers and managers who have worked across a variety of departments and programs — who co-signed an essay alleging that the company has a grueling workplace culture that makes it impossible for the New Shepard rocket's engineers to guarantee its safety. The essay states that many of its signatories "say they would not fly on a Blue Origin vehicle."

That news also came amid a flurry of headlines that paint a picture of internal turmoil at Blue Origin, including a wave of exits among senior-level staff.

Blue Origin did not respond to requests for comment about the safety allegations. But the company has repeatedly stated that safety is its top priority.

Powers, the Blue Origin vice president who will be flying on Wednesday, also responded to the safety allegations in an interview with CNN's Erica Hill on Monday, saying the reports did not give her pause.

"I've been working at Blue on the new Shepard program specifically for the past eight years," she said. "A team of very, very talented professionals and colleagues — some of the best that I've worked with in my 20 years in human spaceflight — have been committed to the safe operation of this program."

When most people think about spaceflight, they think about an astronaut circling the Earth, floating in space, for at least a few days.

That is not what the New Shepard passengers will be doing. In fact, if all goes well it should look very similar to Bezos' flight back in July.

They'll be going up and coming right back down, and they'll be doing it in less time, about 10 minutes, than it takes most people to get to work.

Visually, Blue Origin's livestream will show the rocket and capsule sitting on a launch pad at Blue Origin's private facilities in rural Texas — near Van Horn, which is about 120 miles east of El Paso.

New Shepard's suborbital fights hit about three times the speed of sound — roughly 2,300 miles per hour — and fly directly upward until the rocket expends most of its fuel. The crew capsule will then separate from the rocket at the top of the trajectory and briefly continue upward before the capsule almost hovers at the top of its flight path, giving the passengers a few minutes of weightlessness. It works sort of like an extended version of the weightlessness you experience when you reach the peak of a roller coaster hill, just before gravity brings your cart — or, in this case, your space capsule — screaming back down toward the ground.

The rocket, flying separately after having detached from the human-carrying capsule, will re-ignite its engines and use its on-board computers to execute a pinpoint, upright landing.

The New Shepard capsule, carrying the crew, will then deploy a large plume of parachutes to slow its descent to less than 20 miles per hour before it hits the ground. The passengers will be further cushioned by shock-absorbent seats and a "retro-thrust" system that creates a "pillow of air" around the capsule.

What's the point of all this?

Virgin Galactic's tickets cost about $450,000 — more than the median home sales price in the United States. Blue Origin has not publicly set a ticket price, though it did recently sell one at auction for a whopping $28 million. Shatner will be flying as a complementary guest, though Bezos said in July that the company has sold nearly $100 million worth of tickets in total.

This is all part of a much broader push by commercial space companies — and NASA — to make space a place of business. The idea is that the private sector can spur innovation and drive down costs, paving the way for a future in which everday people — not just professional astronauts — live and work in space. That vision has elicited plenty of criticism, with skeptics questioning whether we can build an equitable future in space if it's mapped only by those with means.

It's also not clear how much sustained interest suborbital space tourism will garner from the world's wealthiest people. But Blue Origin and Virgin Galactic also plan to parlay their technologies into other ventures. In Blue Origin's case, that includes building a massive orbital rocket for launching military, science and commercial satellites and a lunar lander. Though, Blue Origin's bid to make a vehicle that will land the next humans on the moon was recently turned down by NASA and is now caught up in a court battle.