Wildfires used to ease in intensity at night. A study says it's not the case anymore 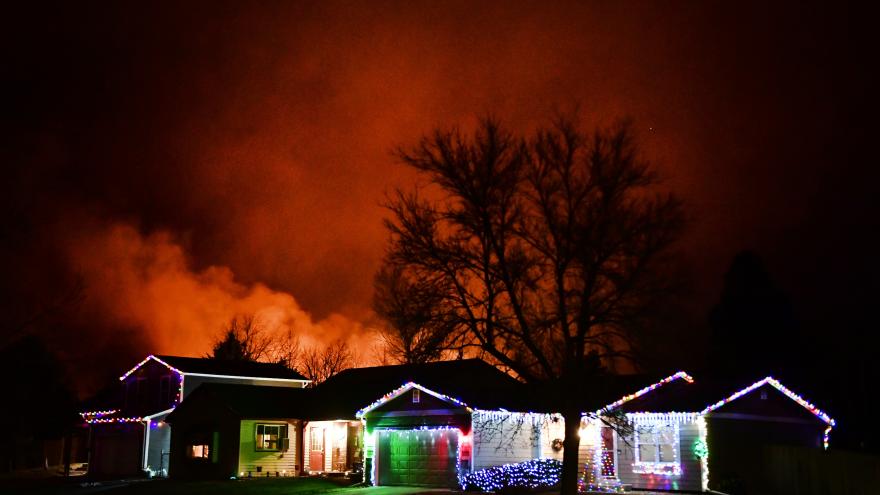 By Jennifer Gray, CNN meteorologist (CNN) -- The West is burning out of control. Warmer temperatures and

And now a new study suggests fires are becoming bigger and stronger at night, the time when firefighters used to be able to gain some ground.

"I personally saw extreme fire behavior at night on the Thomas Fire in Ventura and the Flash Fire near Saint Helena and Calistoga," said Chief Jesse Alexander with the Yuba City, California, fire department.

He has fought some of the state's largest fires and has seen the intensity of the nighttime fires firsthand. "Night changes everything," Alexander explained. "Your senses are heightened due to lack of visibility, which makes it difficult to accurately determine fire size," adding, "Fires always look bigger at night."

In reality, nighttime fires are indeed getting bigger and more intense, making them more difficult to fight.

"Nighttime fires have become more intense and more frequent in recent decades, as hot, dry nights are more commonplace," found the study led by the Cooperative Institute for Research in Environmental Sciences' (CIRES) Earth Lab at the University of Colorado Boulder,

While the scientists found it to be true across the globe, the Western US seems to be off the charts.

"There are certain places that are definitely seeing a much bigger increase than what the global picture is, and the Western US is one of them," Jennifer Balch, lead author on the study, told CNN.

Scientists used satellite imagery from and hourly climate data from 81,000 fires around the world to measure the Vapor Pressure Deficit, or VPD.

Weather satellites have the ability to sense different wavelengths, and one of those is fire temperature, as seen in a tweet from 2020.

"This is a really important variable for fire science," said Balch. "It's essentially the combination of temperature and humidity, and it indicates how fast the atmosphere is sucking moisture out of fuels."

"When VPD is relatively low, the air is cool and moist, and fires cannot thrive," the study outlined, which is when firefighters take advantage of better conditions to help contain the fire.

However, when the VPD is high, "the air is hot and dry, parched and primed for burning," according to the study.

Scientists found nighttime conditions are becoming much more conducive for the spread of fires, stating "one full week of additional flammable nights per year in burnable lands across the globe in the last 40 years. And in the Western US, it increased by more: 11 nights, a 45% increase over the four decades (1979-2020)."

The study also used remote sensing and modeling techniques to track the progression of nighttime fires from tens of thousands of fires around the world.

However, in the Western US, the number was four times greater at 28% more intense.

"It is related to the combination of temperature increase in the West plus the drought conditions or how dry it is," Balch pointed out.

"Those two factors are playing a significant role in how hot and dry our nights are across the Western US."

There was also a 36% increase of flammable nighttime hours between 1979 and 2020, while daytime flammable hours increased by 27%.

"The fact that fires are passing from day to night means that we're witnessing more extreme fires in terms of how fast they're moving, how long they're running, and how big they're getting," Balch added.

The Dixie fire raged through the town of Greenville, California leveling the town in just two hours during the night in early August 2021.

In August 2021, the Caldor fire in California doubled in size, scorching roughly 25,000 acres in a single night.

The Marshall fire near Boulder which destroyed hundreds of homes on New Year's Eve, grew more than 6,000 acres overnight.

And the Camp Fire, which destroyed the town of Paradise, California in 2018, at one point was burning an area the size of a football field every second through the overnight hours.

"With climate change, we've seen a more than two degree Fahrenheit increase across the West," Balch confirmed. "What that translates to is fire is very responsive, and it just takes a little bit of warming to get a lot more burning."

As fires at night become more intense, so does the job for firefighters on the front lines.

What it's like fighting fires against the midnight sky

"Usually the night brings a little reprieve from the physical and emotional stress of the day, but when it stays dry, warm and windy overnight the stakes are high, and it's anything but relaxing," said Matthew Jeglum, incident meteorologist with NOAA's Western Region.

He has seen nighttime fires from the front lines as a firefighter and a meteorologist.

"Warmer and drier nights can limit the time period when firefighters are able to do burnouts to help control the fire, which are a critical tool in the firefighter's toolbox," Jeglum noted.

He explained when fire activity is elevated overnight due to dry conditions, it can also prevent firefighters from getting close enough to the fire to build a fire line right along the fire's edge.

"They instead build lines that leave unburned fuel between the line and the fire," says Jeglum.

"Injuries increase based on lack of visibility, harder to identify and isolate hazard trees (trees that fall on you) and fatigue may start to become a factor based upon your physical actions that were performed the previous 16-20 hours," Alexander outlined.

Jeglum and Alexander both said firefighters many times have fewer resources available at night to help with the fire fight, especially aircraft.

"You won't have aircraft backing you up because in almost all cases they can't fly," Jeglum explained. "You can't see what the smoke column is doing. Situational awareness and communication can be harder. It's a unique experience."

It is a unique experience which may not seem unique at all in the years ahead.

Forty years ago, temperatures would cool more at night and humidity levels would increase, providing relief to firefighters, and "flammable nights" were rare, the study recounted.

Now, nights are warming faster than days are, amid our changing climate.

"Traditionally, night was when we could make some progress with building containment lines and perform burning operations to get in front of the fire," Alexander recalled. "On the Glass Fire (2021) we were just trying to catch it at night because it was going so fast."

2020 saw a record-breaking year in California for acres burned.

Eight of the 10 largest fires in California history have occurred during the last five years.

Four of the top five largest wildfires have occurred in the last three years (2018-2020).

It's a grim reality in a new environment of more intense, more frequent nighttime wildfires.