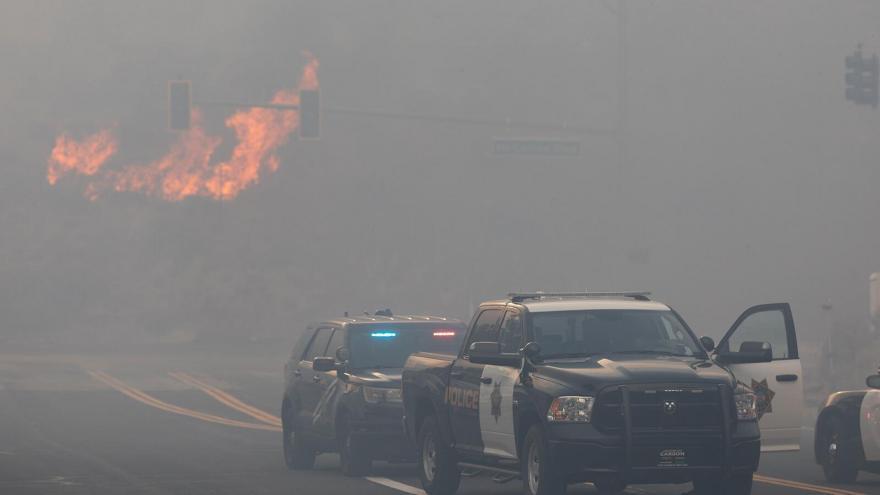 Wildfires in three states leave one dead and destroy thousands of acres.

(CNN) -- Wildfires have scorched more than 8.7 million acres across the country this year, but the season is still not over. Right now, there are three new wildfires burning in the West: the Mountain View Fire, the Pinehaven Fire and one in Bear Creek Park.

A 20,000-acre wildfire burning along the California-Nevada border has left one person dead. The wildfire south of Lake Tahoe has destroyed dozens of homes, according to the Mono County Sheriff.

At least 80 homes in the town of Walker, California, have been leveled by the wildfire and about 400 residents are still under evacuation orders. The orders will remain in place as power lines have been severely damaged, Shoemaker added.

Firefighters say about 20% of the blaze is contained and rain in the area has helped to put out the flames.

In Bear Creek Park, Colorado, officials have announced mandatory evacuations, according to CNN affiliate KKTV. Firefighters have contained 50 percent of a fire burning dangerously close to homes on Thursday.

A home security camera showed flames and thick smoke closing in on a wooden deck. Firefighters could be seen rushing with water hoses to contain the blaze as it came dangerously close to the home. They managed to extinguish the flames and save the house.

Colorado Springs Fire Chief Ted Collas lavished praise on all the firefighters who potentially saved hundreds of homes, according to KKTV.

Wildfire grows to 1,200 acres within hours

A wildfire that started Tuesday near Reno, Nevada, quickly grew to 1,200 acres, according to the local fire department.

"We have multiple structures that have burned" in the Pinehaven Fire, Reno Fire Chief Dave Cochran told reporters.

No injuries have been reported, but two communities near the Caughlin Ranch area are being told to evacuate. "We have approximately 500 homes threatened," Cochran said.

The fire chief says winds have been gusty and erratic in the area, making fighting the fire more difficult. Reno will be getting help from more than a dozen strike teams in the region, but Cochran says it's not clear whether they will be able to fight the wildfire from the air.

A fire in the same area nine years ago made dozens of homes uninhabitable, and Cochran says the Pinehaven Fire could be just as serious.

Meanwhile, Nevada Gov. Steve Sisolak has declared a state of emergency in response to the Caughlin Ranch-Pinehaven Fire.

"I want to thank all the first responders, local government agencies and nonprofit entities who have already stepped up to assist the community during this emergency event," Sisolak said. "This truly reflects Nevada's Battle Born spirit and our commitment to caring for one another in times of need."