Wildfires in Florida's Panhandle have forced hundreds to flee 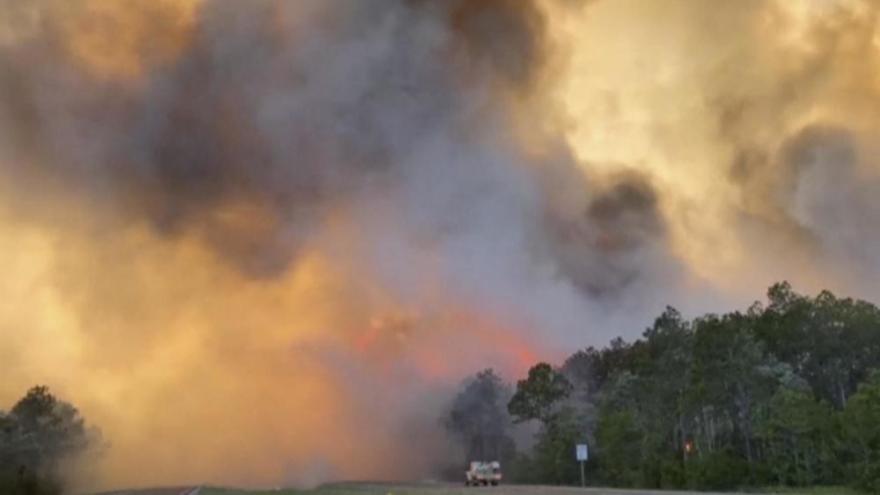 Fire and smoke rise from trees alongside a road in Santa Rosa County.

(CNN) -- Wildfires were burning parts of the Florida Panhandle on Thursday, damaging or destroying an unspecified number of buildings and forcing hundreds of people to flee, officials said.

Two fires tore through Santa Rosa and Walton counties, which are between Pensacola and Panama City Beach.

A number of rural homes were in or near the burning area outlined by a map from the state's forest service. The fire was burning on either side of Interstate 10. It's not immediately clear how many, if any, homes were damaged.

Some evacuation orders have been lifted, but county officials say residents should be prepared to leave their homes at a moment's notice.

"The threat is far from over," Fried said at a press conference. There is no rain in the forecast, and "conditions will continue to be increased for fire behavior."

People south of I-10 have been asked to evacuate through at least part of Thursday, state officials said.

Officials closed parts of I-10 Wednesday, in part because smoke made it difficult for drivers to see, the state transportation department said. Nine miles of the highway still were closed Thursday morning, CNN affiliate WKRG reported.

Panhandle resident Rebekah Spivey said she was leaving her home with her two children as flames got uncomfortably close to her area.

"This is literally everything I have," Spivey told CNN affiliate WEAR about belongings in her house. "Trying to figure out what I would take. I guess things can be replaced."

The fire was caused by an "escaped prescribed burn by a private contractor on private land," Fried said.

Gov. Ron DeSantis visited Santa Rosa County on Thursday to receive a briefing from local officials. Earlier, he said he would ask the Federal Emergency Management Agency to give financial aid to the county.

In Walton County, a fire that started Wednesday was burning near US 98 not far from the community of Santa Rosa Beach, damaging or destroying an unspecified number of buildings on either side of the highway, the agriculture department said.

About 500 homes were evacuated from the area, and part of the highway was closed for a time Wednesday before being reopened Thursday, transportation and fire officials said.

The fire had burned more than 500 acres and was about 65% contained, Walton County Fire Rescue said.

A third fire, in Escambia County, near the Florida-Alabama line, had burned a 1,000 acres by Thursday, but was not immediately threatening homes, and no evacuations were ordered, WEAR reported.

Officials think the fire will burn itself out, according to WEAR.

Wayne Keene watched the Escambia County fire from a distance at his home along Perdido Bay. He told WEAR the smoke "filled the sky."

"Small fires, we have them here all the time, especially the prescribed burns. But they never got that big," he told WEAR.