Hundreds have been evacuated after wildfires destroy more than 90,000 acres across 3 states 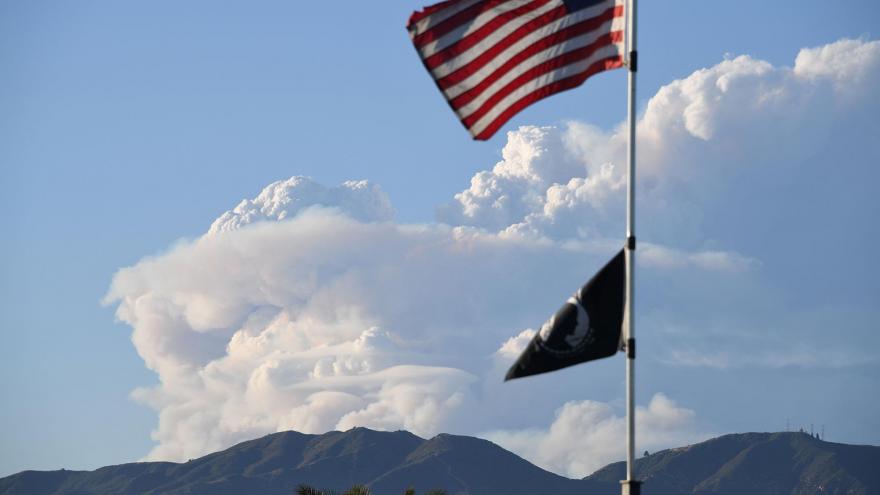 A plume of smoke from the Lake Fire is seen Wednesday from Los Angeles, nearly 60 miles away.

(CNN) -- Firefighters across three Western states are battling wildfires that have destroyed more than 90,000 acres.

Evacuation orders have been issued in areas threatened by the Lake Fire and Ranch2 Fire in California's Los Angeles County; the Mosier Creek Fire in central Oregon; and the Pine Gulch, Grizzly Creek and Cameron Peak fires in Colorado.

More than 100 homes were evacuated in the rugged hills near Lake Hughes in LA County as the blaze exceeded 11,000 acres. Three structures have been destroyed, and more than 5,000 others are threatened, according to the LA County Fire Department.

The fire was 5% contained on Thursday evening, a day after it was reported, fire officials reported.

A second fire in the county, The Ranch2 Fire, has forced more than 300 homes to be evacuated. It has consumed more than 3,000 acres and is 0% contained.

Friday's forecast for the area is hotter and drier, CNN meteorologist Michael Guy said, which will likely last well into next week. Across the West Coast and parts of Texas, around 80 million are under some form of a heat alert, CNN meteorologist Rob Shackelford said.

From worsening drought to "weather whiplash" that brings wetter wet seasons and drier dry seasons, climate change is hitting California harder than almost anywhere else in America, CNN meteorologist Brandon Miller said. Wildfires are one of the most apparent, and destructive, examples of this. Numerous studies have tied increasing CO2 emissions and climbing temperatures to increased acreage of burning across the Western US, particularly in California.

More than 1,000 fire personnel have been assigned, fire officials said, and evacuation centers were set up at a high school and a sports complex.

Heat builds in other wildfire zones

In neighboring Oregon, the Mosier Creek Fire has also prompted evacuations. Several large air tankers were en route to help control the blaze, which by Thursday had consumed about 800 acres, according to the Oregon Department of Forestry's Central Oregon District.

The heat is just building there and will last into the beginning of next week, Guy said, along with dry conditions.

The Mosier Creek Fire has forced at least 564 homes to be evacuated and four structures have burned, according to the Oregon Department of Forestry. Authorities believe the fire was human-caused.

The Pine Gulch Fire had consumed more than 69,000 acres by Thursday evening, with only 7% containment, fire officials reported.

Less than 100 miles away, the Grizzly Creek Fire had destroyed more than 6,200 acres by Thursday evening, according to the US Forest Service. The fire, which ignited Monday, crossed the Colorado River and Interstate 70 on Wednesday, prompting the interstate to shut down east of Glenwood Springs.

"This fire is in a really tough spot, and it's really tough to fight," White River National Forest supervisor Scott Fitzwilliams said Wednesday during a community briefing.

Nearly 900 people are working to contain the two fires. "We're going to be here for a while," Fitzwilliams said.

About 250 miles east in Larimer County, the Cameron Peak Fire has consumed more than 1,500 acres.

Colorado is heating up as well, Guy said, with high temperatures for the next seven days. A chance of daily rain in the region could bring some relief, but with it comes the risk of new fires from lightning.