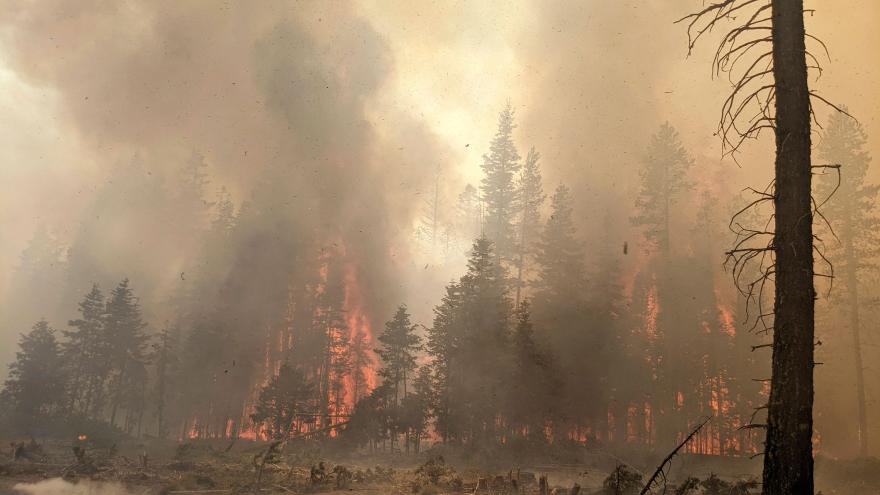 (CNN) -- Wildfires in the US have burned nearly three million acres so far this year -- that's the size of Delaware and Rhode Island combined and then some -- as the nation's largest fire scorches even more land and buildings.

The Bootleg Fire, the largest active fire in the US, has been steadily growing since it was sparked by lighting July 6. It has charred 413,400 acres in southern Oregon, destroying hundreds of structures and vehicles in its way. It was 53% contained late Tuesday, according to Inciweb, the clearinghouse for fire information in the US.

The enormous fire has destroyed 161 residences and 247 outbuildings, according to a statement on InciWeb.

"We will continue operations with a focus on the safety of the community and our firefighters," Incident Commander Norm McDonald said in the statement. "We're continuing with community and agency partners to suppress the fire as effectively as possible to protect timber, ranchlands and other local values."

Cooling temperatures and the likelihood of isolated showers through Wednesday are expected to help in the fight. But aggressive fire behavior is expected to return later in the week as temperatures rebound and rise, according to Inciweb.

"The cooler temperatures and precipitation yesterday were a welcome change," incident meteorologist Chris Foltz said in a daily press update Wednesday. "A wetting rain fell yesterday dropping as much as 0.6 of an inch on the western area of the fire. The eastern side was a bit drier, but still received a tenth of an inch. Not all areas of the fire received rain, but overall, the cooler, more humid conditions are beneficial for the firefighting crews."

With severe drought conditions continuing across the western US, wildfires have become larger and more frequent. Currently, 79 large active wildfires account for more than 1.5 million acres burned, according to the National Interagency Fire Center.

And it's not just the United States facing the devastating impact of the climate crisis, which is making deadlier and more destructive wildfires the new normal.

Wildfires are spreading in southern Europe, including on the Italian island of Sardinia, where nearly 1,000 people fled their homes due to encroaching flames.

The island's local government declared a state of emergency Sunday, calling the fires a "disaster without precedence."

"It is still not possible to estimate the damages caused by the fires that are still ongoing in the Oristano area," the president of the Sardinia Region, Christian Solinas, said Monday in a statement. "Vegetation destroyed, businesses and homes burnt and animals killed."

On Tuesday, a regional spokesman told CNN the fire has burned nearly 50,000 acres, but officials are still assessing the damage.

Meanwhile, Greece saw about 50 fires ignite between Sunday and Monday as it grapples with a stubborn heatwave.

In the US, the heat is exacerbating issues for those battling the fires.

More than 40 million people were under heat alerts throughout much of the central US on Tuesday, where it was or felt like over 100 degrees.

The fire, which has burned 212,799 acres in northern California, was 23% contained late Tuesday, according to Inciweb.

Flames from the Dixie Fire overcame much of the town of Indian Falls, which sits along CA-89 in California's Plumas National Forest, northwest of Reno, Nevada.

"It is safe to say that all residents in this small community have been impacted by this fire," Sheriff Todd Johns told CNN in an email Monday.

The sheriff estimated 18 of 25 full time homes in Indian Falls were lost in the fire.

"We have been unable to conduct an actual assessment of this area, at this time, due to active fire in the area as well as hazards," Johns said. "That being said, there was substantial structure loss."

Crews on the ground are also struggling as they attempt to tame the flames.

In Montana five firefighters were injured when "a sudden wind shift blew the wildfire back over their position as they were constructing a defensive fire line on the perimeter of the Devils Creek Fire in Garfield County, July 22," according to a news release from the Bureau of Land Management. "Numerous wind shifts and rapid rates of spread resulted in erratic fire behavior as thunderstorms and associated cells were passing over the area when the incident occurred."

The firefighters were evacuated for a medical evaluation, the statement said.

Montana currently has 19 active large wildfires, according to NIFC.

Meanwhile, the steep terrain and extreme fire behavior has created dangerous conditions for firefighters in California, including hotshot crews working on the Dixie Fire.

"Steep slopes, lot of rolling materials, a lot of dead trees coming down, so I can't overemphasize the danger that these firefighters are facing in trying to keep this up," fire behavior analyst Dennis Burns said.

Crews must be methodical so that they don't make the fire worse with spotting, which is when a fire produces sparks or embers that are carried by the wind and start new fires, he said.