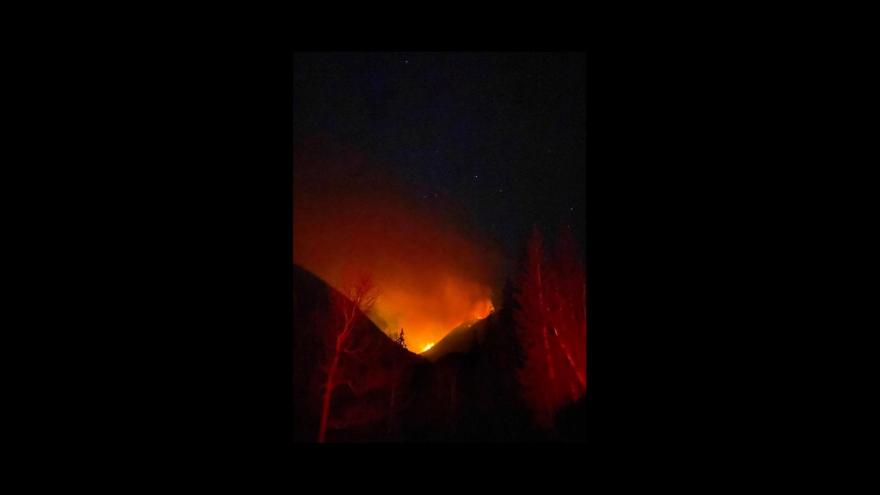 Twenty-three hikers were rescued from a trailhead near the Ice Fire.

(CNN) -- National forest land in five Colorado counties will temporarily close due to "unprecedented and historic fire conditions," according to federal officials.

"The new starts and explosive growth of fires throughout the northern Colorado Front Range over the past week, including the Cameron Peak, Cal Wood, and Lefthand Canyon fires, has led to this decision," said Tuesday's release from the US Forest Service, mentioning Arapaho & Roosevelt National Forests.

As of Tuesday morning, 442,000 acres of land were affected by wildfire across north central Colorado and southern Wyoming, according to the Rocky Mountain Coordination Center. About 3,000 firefighters and fire support personnel were assigned to fight the fires.

Rescue workers evacuated 23 hikers and three dogs by helicopter Monday night from the San Juan National Forest in southwest Colorado as the Ice Fire burned more than 300 acres, the Office of Emergency Management in San Juan County, Colorado, said in a Facebook post.

The blaze is one of several burning across the country during a historic fire season. The normal fire season runs through the end of October.

So far this year, 46,148 wildfires have burned more than 8.4 million acres in the United States.

"This is 2.1 million more acres burned than the 10-year average," the National Interagency Fire Center said.

At least 42 people have died in wildfires in Washington, California, Idaho and Oregon this year, according to a count by CNN.

In Oregon, one person remains missing, nine people have died and 4,003 homes have been destroyed in fires that have burned 1.2 million acres this season.

Farther south, red flag warnings remain for parts of Northern California, which has already seen fires that have burned a historic 4.1 million acres.

New fires sparked in Colorado, Utah and New Mexico over the weekend, burning tens of thousands of acres and prompting evacuations.

The Cameron Peak Fire in Colorado had scorched 205,004 acres as of Tuesday afternoon, with containment decreasing as the fire continues to grow.

Containment had reached 62% Monday morning but decreased to 51%, according to the incident overview report.

Firefighters used aircraft in their battle Monday and "were finally able to go on offense," Incident Commander Dan Dallas said in a post on the Cameron Peak Fire Facebook page.

A red flag warning will begin in the area at noon Wednesday and continue until Thursday morning, according to the post.

The blaze -- the largest the state has ever seen -- started August 13 on the Arapaho and Roosevelt National Forests near Cameron Pass and Chambers Lake. No other fire has ever reached 200,000 acres in Colorado.

Some 1,542 fire personnel are battling the fire, which has been fueled by high winds combined with critically dry conditions. Fire personnel have estimated that containment could be reached by November 8.

In Boulder County, two new fires that ignited this weekend -- prompting evacuations of the towns of Ward and Jamestown -- have burned nearly 10,000 acres in a matter of days, according to the CalWood and Lefthand Canyon Fire's Facebook page.

According to the page, 9,365 acres have burned in the CalWood Fire near Jamestown, which sits in the foothills of the Rocky Mountains, about 15 miles northwest of the city of Boulder.

Twenty-six homes were lost in the fire over the weekend, Boulder County Sheriff's Office Chief Division Officer said during a press briefing Monday. It is 17% contained, the fire Facebook page said.

About 10 miles southwest of the CalWood Fire, the Lefthand Canyon Fire is burning near the town of Ward. The fire has grown to 470 acres and is 4% contained, according to the post.

Wind gusts of up to 45 mph are expected in higher elevation areas over the next two days.

Two schools in the area have been closed for the week as fire operations continue for both blazes, Boulder OEM said in a tweet Monday.

Target shooting identified as cause of fire in Utah

A police officer present when the fire started is cooperating in the investigation, Utah Fire Info said.

This year is a record-setting season for human-caused wildfires in Utah, with 990 so far, the Utah Division of Forestry, Fire & State Lands said last month.

More than 8,600 wildfires have burned a historic 4.1 million acres in California, CalFire said in an update.

Thirty-one people have died in the fires and more than 9,200 structures have been destroyed, the update said.

Some 7,400 firefighters are still fighting on the frontlines of 22 wildfires across the state of California as of Monday, with 12 of them being considered "major incidents," according to the update.

Over the weekend, 47 new initial attack wildfires required firefighter response, according to the update.

The fire threat is still elevated across the northern part of the state, with a Fire Weather Watch in effect from late Monday night through Wednesday morning, the update said.

"Above normal temperatures and lack of humidity recovery will persist this week in much of California, with only the coastal regions experiencing some relief," the update said.

"Parts of Northern California are under red flag warnings and a fire weather watch today as temperatures are warming up in the region to a high 15-20 degrees above normal," CNN meteorologist Michael Guy said. "This, combined with low relative humidity values and strong offshore winds, will increase the risk of wildfires to start and can cause rapid spread of the fires."

"The only relief coming for the West will be a front pushing through this Thursday - Friday," Guy said.

The Luna Fire in New Mexico's Carson National Forest had burned 7,400 acres as of Tuesday afternoon, according to the US Forest Service. The wildfire is 0% contained.

The Luna Fire was first reported burning Saturday night at an elevation of up to 11,000 feet above sea level, according to InciWeb.