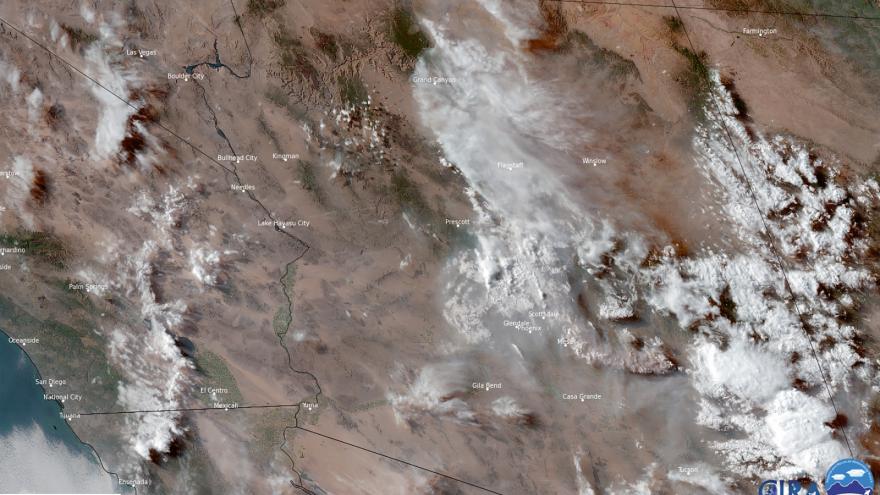 (CNN) -- Nevada and Arizona are looking at breaking all-time state record highs this week, but Phoenix could halt just shy of its record Tuesday due to wildfire smoke.

The National Weather Service (NWS) is forecasting a high of 117 degrees in Phoenix on Tuesday, which would surpass the record high for June 15 measured in 1974 at 115 degrees.

There is uncertainty in the outcome for record-breaking temperatures due to the smoke from two large wildfires burning east of Phoenix.

Just two miles separate the two fires.
Track the wildfires and the smoke

Smoke can be seen from the GOES-17 satellite expanding northwestward toward Phoenix, as well as trailing north through Arizona as far as the Four Corners. A thick layer of lofted smoke could be seen at the Grand Canyon as the sun set Monday night.

Light is absorbed by smoke particles, which are dark and can be widespread in the air during wildfire events. This reduces the intensity of the sunlight that can heat the region, especially when thick smoke plumes are present.

Daytime heating could be impacted by the smoke plume Tuesday due to easterly winds pushing the smoke into the Phoenix metro area.

The northern portions of the Pheonix area are the most likely to experience uncertainty due to smoke obstruction. High temperatures could vary from 114 to 119 degrees.

Some areas of Phoenix, mainly to the south, are still likely to reach the record 115, with temperatures approaching 120 degrees in isolated places.
See just how hot it is forecast to be in Phoenix this week

"The uncertainty in forecast highs decreases further west towards La Paz, eastern Riverside, and Imperial Counties where smoke and haze will have less of an effect and 117-120 degree Fahrenheit temperatures are likely," stated NWS Phoenix.

A chance for isolated thunderstorms for central Arizona on Tuesday could add fuel to the fires. These storms have the potential to create gusty outflows that could interact with the wildfires, which are already fast moving.

Wildfire smoke might be dense enough to impact heating through the end of the week but is forecast to clear out by Friday when temperatures are most likely to exceed 120 degrees.

Even if records are not broken in some areas this week, the heat will still be cause for concern. Excessive heat warnings remain in effect through the end of the week, with temperatures 10 to 15 degrees above average.