Widow of slain NYPD officer recalls youthful love and the anguish of his death, calls out new DA's policies 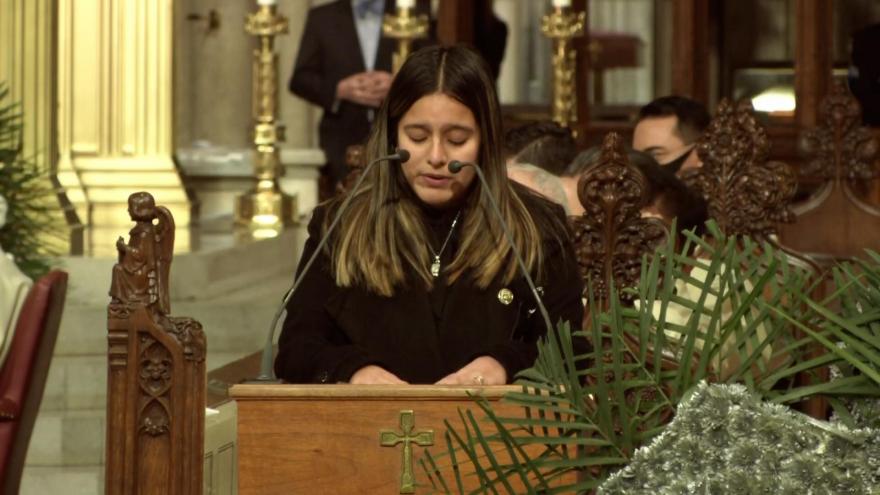 The widow of slain New York Police Department Officer Jason Rivera tearfully recalled her childhood love at his funeral January 28, and said she has been living in a "nightmare" since his killing a week ago.

(CNN) -- The widow of slain New York Police Department Officer Jason Rivera tearfully recalled her childhood love at his funeral Friday, and said she has been living in a "nightmare" since his killing a week ago.

"I would say good morning to you all, but in fact, this is the worst morning ever," Dominique Luzuriaga told mourners at St Patrick's Cathedral in Manhattan.

"I can't believe I'm standing in front of thousands of people in a cathedral we planned to visit later this year. All of this seems so unreal, like I'm having one of those nightmares that you never thought you'd have."

Luzuriaga said she is "full of rage and anger, hurt and sad, torn. Although I gained thousands of blue brothers and sisters, I'm the loneliest without you. I know you're looking at me and beside me telling me I could do this, and I'm trying. Trust me, I am. But I didn't prepare for this."

She recalled they met in elementary school. He was the "class clown," she said, and "there was never a dull moment" with him around.

"We never thought our innocent childhood love would lead us to marriage," she said. "Even when we said I do, we couldn't believe we said it. October 9th was the happiest day of our lives."

The suspect, Lashawn McNeil, tried to run but was confronted and shot by a third officer on the scene and also died days later, police said.

Luzuriaga ended her remarks by turning her attention to the new District Attorney, Alvin Bragg, drawing applause and a standing ovation from the crowd.

"The system continues to fail us. We are not safe anymore. Not even the members of the service. I know you were tired of these laws, especially the ones from the new DA. I hope he's watching you speak through me right now," Luzuriaga said. "I'm sure all of our blue family is tired too. But I promise, we promise, that your death won't be in vain. I love you until the end of time. We'll take the watch from here."

A source confirmed to CNN that Bragg was present at the funeral service on Friday. CNN has reached out to Bragg's office for comment.

Commissioner Keechant Sewell said Rivera was being posthumously promoted to Detective First Grade. She presented Rivera's family with a badge after the announcement.

"This has always been a city of lights and Police Officer Jason Rivera was one of its brightest," Sewell said. "He acutely observed a need in his community. He knew that decisions and changes are made by those who show up -- so he suited up."

Sewell said Rivera was "wise beyond his years" and "cherished the company of his colleagues -- his brothers and sisters in blue."

"We as a city, as a state, and as a nation -- we say thank you, Jason. Today our hearts are with his beautiful family," Adams said. "He's a hero and our fellow New Yorkers acknowledge that."

Adams said Rivera was the first person in his family to become a police officer and said he was an example of how first-generation New Yorkers and children of immigrants help shape the city.

"We care about each other -- that's what makes this city possible, along with the courage of officers like Jason Rivera. The hearts of 8.8 million people are reaching out in mourning today and we will ensure everything within our powers to not lose our family members through this senseless violence," Adams said.