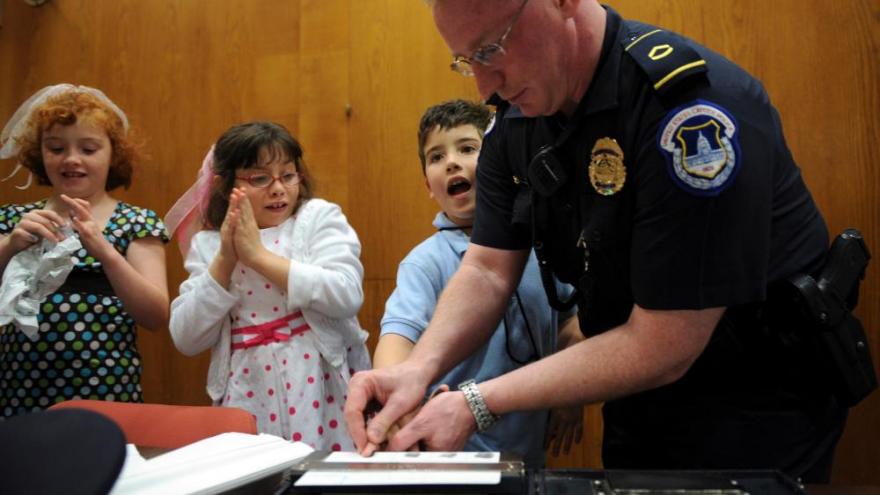 The widow of Metropolitan Police Officer Jeffrey Smith is petitioning the Board to declare, her husband’s suicide a line of duty death, so she can continue receiving health and financial benefits, and pictured, Capitol Police Officer Howard Liebengood in Washington DC, on April 2008.

(CNN) -- As President Joe Biden welcomed the families of police officers who had defended the US Capitol on January 6 to the Rose Garden last week, a legal battle was pending before the Police and Firefighters' Retirement and Relief Board in Washington on behalf of Erin Smith, the widow of Metropolitan Police Officer Jeffrey Smith, who died by suicide days after the Capitol attack. And Erin Smith's attorney was intent on getting a word with the President to tell him about their fight.

Smith is petitioning the board to declare her husband's suicide a line of duty death, so she can continue receiving health and financial benefits. Her attorney used his brief encounter with Biden at the White House on Thursday, just after the official ceremony signing the measure to award officers the Congressional Gold Medal, to pressure him to act.

"I told him, it's a good first step that you're acknowledging Jeffrey Smith and Howard Liebengood's sacrifice, but the gold medal is not enough," Smith's attorney David Weber told CNN. "I asked the President, did you know that they took away their wives' health insurance and I'm fighting to have Jeffrey Smith's [suicide] ruled a line of duty death?"

Capitol Police Officer Howard Liebengood died by suicide on January 9. His widow, Serena Liebengood, wrote an open letter to Rep. Jennifer Wexton, a Virginia Democrat, in March calling for US Capitol Police to declare her husband's death in the line of duty.

Video from last Thursday at the White House captures Weber behind the podium where the President had spoken earlier, as Vice President Kamala Harris chats with Erin Smith. As Biden prepares to make his way back inside the White House, Weber grabs his attention and motions toward Erin to explain the legal battle they are waging.

"He grimaced," Weber recalled. "But then he gestured to a legislative aide."

Weber said he got a call less than 90 minutes after leaving their photo op inside the Oval Office. A White House aide told Weber that Biden had requested a briefing on the issue but that there was no commitment on whether the President could ultimately help their case.

"They were being very cautious," Weber said.

The White House did not immediately respond to a request for comment.

The issue is now at the forefront since four officers -- three Metropolitan police officers and one Capitol Police officer -- have died by suicide since January 6. Washington, DC, law only permits a surviving spouse to receive a survivor annuity and continued benefits if an officer dies in the performance of their duty and the mayor determines the death was not caused "by his intention to bring about his own death."

Smith told CNN's Don Lemon on "Don Lemon Tonight" Monday that her husband became "a completely different person" after the Capitol attack. Eventually he took his own life.

But, she said, "because it's not classified as 'in line of duty,' you don't receive any of the benefits that a police officer's family would receive if it was 'in line of duty.' The main thing is they're not recognized. They're not given the burial that they're deserved. They're not given the recognition they deserve. My husband, you know, was a police officer for DC for over 12 and a half years."

"He gave his life for DC and he should be given the same respect as anyone else that puts on the badge and goes to work every day," Smith said.

Weber says there is no known case in which suicide of a Metropolitan Police officer has been declared a line of duty death.

But Weber argues the circumstances of Officer Smith's case require an exception to the rule. The legal brief filed with the police board states Officer Smith was assaulted by the violent mob and hit in the head with a metal pole January 6; he died nine days later after he shot himself in the head while driving to work from his home in Virginia to report for his scheduled shift. It was supposed to be his first day back after seeking medical attention for the injuries and mental trauma he suffered on January 6.

"While the bullet may have been the actual cause of death," Weber told CNN, "the chain of events was set in motion January 6 and the chain was not broken."

Washington Mayor Muriel Bowser's office and the Metropolitan Police Department did not respond to CNN's requests for comment.

Weber has enlisted two experts to argue to the police board that January 6 was the event that directly led to his suicide. Jonathan Arden, the former chief medical examiner for the District of Columbia, who was hired to review the autopsy and medical records of Officer Smith, declared in a filing that "the acute, precipitating event" that caused his death "was his occupational exposure to the traumatic events he suffered on January 6, 2021."

Officer Liebengood's widow also recounted in her open letter how he was ordered to remain on duty "practically around the clock" for three days after the Capitol attack, and how he was "severely sleep deprived" before his January 9 suicide.

House Speaker Nancy Pelosi's office has urged the Justice Department to approve line of duty benefits in Liebengood's case. A Pelosi spokesman said the issues raised by Officer Liebengood's widow were "well-founded." If they do not, she said, Congress would look for ways to change the law.

Officer Smith's case, however, would require a change to DC law or an exemption from the mayor.

Asked about lawmakers who have sought to move on from the Capitol insurrection, Erin Smith said Monday, "They don't relive it every day."

"I'm sure other officers have stated the same thing. I was not there but I relive the same thing over and over again," she said. "I know that if Jeffrey didn't go to work that day, he'd still be here. The terror that he went through affected him, and the city needs to recognize that."