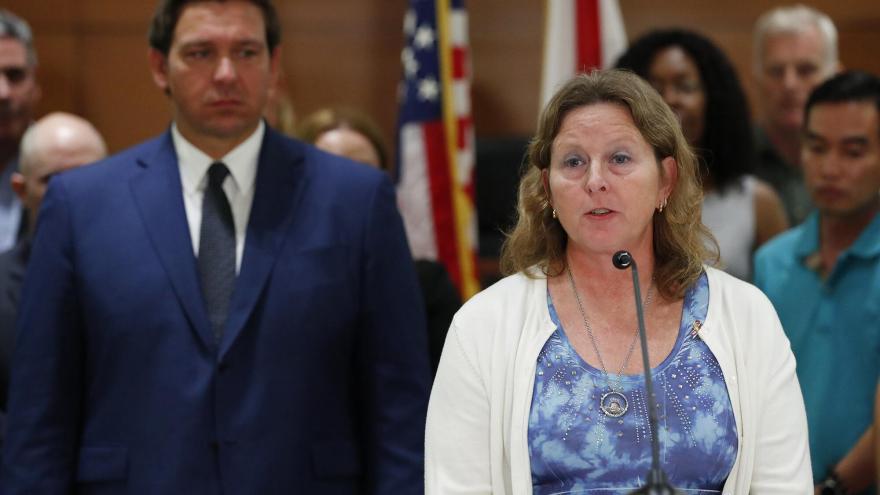 Debra Hixon won a school board seat in Broward County, Florida, nearly three years after her husband was killed in the Parkland school shooting that left 17 dead. In this photo, Hixon speaks as Florida Gov. Ron DeSantis, left, looks on during a news conference, in Fort Lauderdale.

(CNN) -- Debra Hixon won a school board seat in Broward County, Florida, nearly three years after her husband was killed in the Parkland school shooting that left 17 dead.

Hixon's husband, Chris, was killed while trying to disarm the shooter at Marjory Stoneman Douglas High School in Parkland, Florida.

"It means this county has confidence and faith in me, and that means so much because they have been really what's gotten our family through the last three years, and I am so honored to be able to serve them for the next four years on the school board," Hixon told CNN affiliate WPLG-TV after the results came in Tuesday.

The race between Hixon and Holness was a runoff election after neither candidate received at least 50% of the vote in the August primary. The seat became available when Robin Bartleman, a longtime member of the board, was elected to the Florida House of Representatives Tuesday, WPLG reported.

Hixon currently serves as South Broward's maritime/marine science and technology magnet coordinator. She is also the president of the Chris Hixon Athletic Scholarship, which is dedicated to the memory of her husband, according to her campaign website.

Chris Hixon was the Stoneman Douglas athletic director and wrestling coach. His wife described him as an awesome husband, father and American.

"Every one of those students he thought of as his own kid," Hixon said of her husband in 2018.

A naval reservist, Chris Hixon had deployed to Iraq in 2007.

"He loved being an American and serving his country and he instilled that in our kids," she said.

Chris Hixon, along with two other Stoneman Douglas coaches, was posthumously honored with the Best Coach Award at the ESPYS in 2018