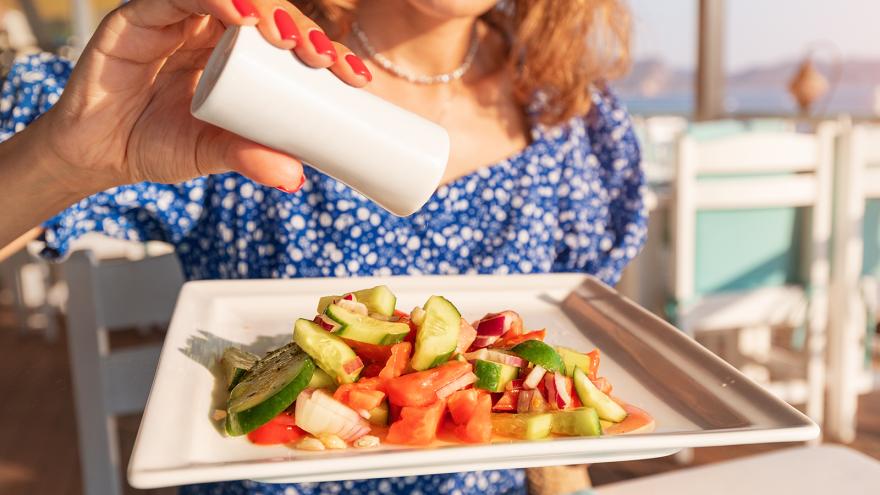 Adding salt to your meal at the table is associated with a lower life span and a higher risk for early death, according to a new study.

The study looked at more than 500,000 people in the UK Biobank who responded to a questionnaire between 2006 and 2010 about their salt habits and the frequency with which they added salt to their food. Before you start revisiting all your favorite recipes: Researchers were only looking at how much salt was added after the meals in question were cooked, according to findings published in the European Heart Journal in July.

Researchers followed up with participants about nine years later and found that the more salt people had added to their meals, the greater their chance of early death. However, those people consuming high levels of salt could lower their risk by eating more fruits and vegetables, the study said.

The American Heart Association recommends adults consume no more than 2,300 milligrams of salt per day -- but notes the "ideal limit" is 1,500 milligrams per day. Consuming too much salt can raise blood pressure, which in turn can cause heart disease, stroke and kidney disease, the heart association said.

The UK National Health Service recommends that adults limit their sodium intake to about a teaspoon of salt a day.

There is a long track record of scientific research showing that a diet high in salt is risky, but this study adds a new level of caution against adding more to your plate, said lead study author Lu Qi, a professor of epidemiology at Tulane University School of Public Health and Tropical Medicine in New Orleans.

"More evidence, especially those from clinical trials, is needed before the public takes any action," he said. "However, our findings are in line with the previous studies which consistently show that high sodium intakes are adversely related to various health outcomes such as hypertension and cardiovascular diseases."

Going further to cut back

Even if you don't add any salt to your own plate, you might be getting more sodium than you should be.

A 2020 meta-analysis of 133 clinically randomized trials on lowering salt intake found strong evidence that cutting back dietary sodium reduced blood pressure in those with existing hypertension -- and even in those who were not yet at risk.

One of the main culprits of high levels of sodium in our diets? Manufactured foods, which often use salt for flavor, texture, color and preservation. More than 70% of the sodium Americans eat comes from what has been added by the food industry to products later purchased in stores or restaurants, according to the US Food and Drug Administration.

"Most of my patients do not add salt at the dinner table, but don't realize that bread rolls, canned vegetables and chicken breasts are among the worst culprits(of high sodium) in the US," said Dr. Stephen Juraschek, an assistant professor at Harvard Medical School who researches sodium and hypertension.

Juraschek wasnot involved in either the Biobank study or 2020 meta-analysis.

But salt makes everything taste so good, you may be thinking.

There are strategies, however, for keeping a vibrant palate and creating enticing dishes with less salt, said Carly Knowles, a registered dietitian who is also a private chef, licensed doula and the author of "The Nutritionist's Kitchen" cookbook.

Knowles recommends cooking at home -- where you have more control over the salt shaker while making your meal -- more often, reading the ingredients on your products, substituting in herb and spice blends without salt, and focusing your diet on minimally processed foods.