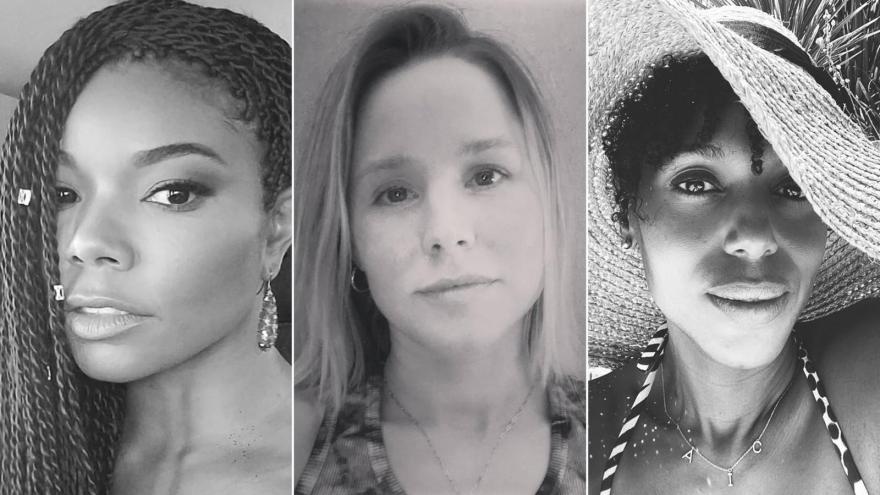 Celebrities and Instagram users are posting black-and-white images in support of women's empowerment with the caption "Challenge accepted."

(CNN) -- Instagram has been overrun with women, famous and otherwise, posting black-and-white images of themselves with the caption, "Challenge accepted."

There doesn't seem to be much motivation for the photo challenge. That may be by design.

Celebrities like Gabrielle Union, Kristen Bell and Kerry Washington have accepted the "challenge," which seems to involve posting a black-and-white image of oneself as a show of women's empowerment. There's no obvious social justice bent here other than to encourage women to share photos of themselves where they feel confident.

It's reminiscent of the Dolly Parton challenge, which encouraged users to post four different images of themselves that they'd use as hypothetical headshots for different social media sites like LinkedIn and Tinder (a studious photo for LinkedIn; a sultrier shot for Tinder). That mostly functioned as a vehicle for users to post four flattering photos of themselves at once.

Ava Duvernay touched on that in her "challenge accepted" post. The "Selma" director shared a striking-black-and-white headshot and said she was "pretty sure this is just a cool excuse to post pix," but she relented at her friends' behest.

Other celebrities interpreted the challenge as a show of sisterly support. Oscar nominee Taraji P. Henson shared a selfie and wrote "it is NOT a challenge to love my sisters but a gift and a bond that we have and we should cherish as long as we walk this earth."

Critics of the challenge have called it an empty gesture that's clogging up social media feeds during the dual crises of protests against racism and the Covid-19 pandemic. Those participating defend the photo challenge as a harmless way to support their friends and take a breath from those crises.

So others have tried to incorporate racial justice into their posts. After sharing an image of herself, Padma Lakshmi, host of "Top Chef" and Hulu's "Taste the Nation," included four images of Black women killed during or after interactions with police, including Breonna Taylor and Sandra Bland, along with information on their stories and the statuses of the officers involved in their deaths.

Many more non-famous folks are posting their own "challenge accepted" photos, too -- the phrase has been used over 4 million times on Instagram. But the hashtag creeps back up again every so often. Recently, international Instagram users were using the hashtag with pictures to show they were staying home to prevent the spread of coronavirus.