Why water is a huge issue for Texans right now 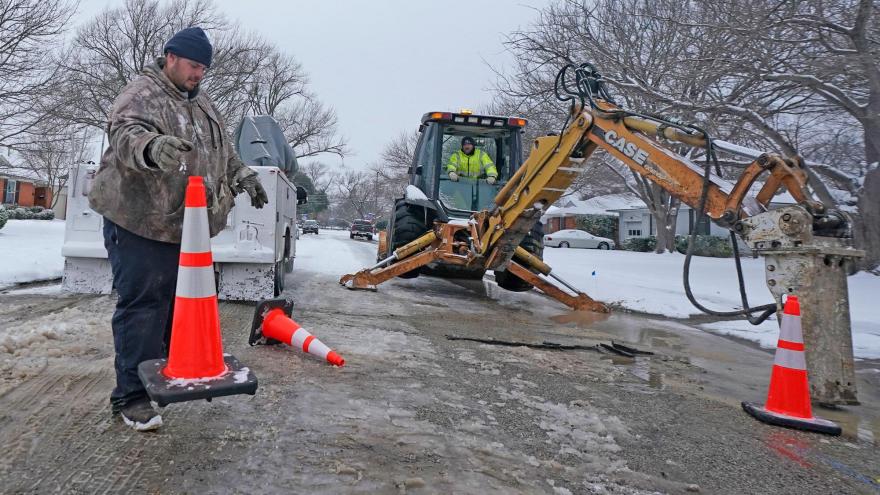 City of Richardson workers prepare to work on a water main pipe that burst due to extreme cold.

(CNN) -- As millions across Texas battle power outages and freezing temperatures during the massive winter storm, one element has proved especially problematic -- water.

Whether it's too much water or too little, high pressure or low pressure, or simply just the wrong form, water has been a huge issue for Texans during this ongoing catastrophe.

"A lot of people are losing water in my area and were told that they would be shutting (the) water off for the whole city with no idea when it would be back, so we filled up pitchers and tubs," San Antonio resident Jordan Orta told CNN. "I went to H-E-B yesterday and there was no water left, so if we lose water, it's all we got until who knows when."

Here's a look at how problems with water has made an already difficult crisis even worse for millions.

Fire departments, hospitals and airports are all struggling

With burst pipes, no operating generators and even frozen fire hydrants, water pressure across the state has taken a hit.

For firefighters at the San Antonio Fire Department, low water pressure because of the cold has meant they have to do more with less.

"Our normal attack would involve multiple hoses and lots of water on the fire, so we've obviously just had to adjust," said spokesperson Joseph Arrington.

Meanwhile, at Houston Hobby Airport, flights were canceled or diverted Wednesday due to a lack of water. Teams provided non-consumable water to airport restrooms from portable water storage tanks. Limited water service was restored by Thursday morning and the airport was operational, officials said.

Hospitals aren't safe from the problems, either.

Harris County Judge Lina Hidalgo called the low water pressure "an enormous problem" for hospitals, and asked the community to stop dripping faucets in an effort to keep the water pressure up.

"They've been creative, from trucking water in for consumption to collecting rainwater to use for flushing toilets," Smith told CNN.

Low water pressure has made basic needs such as using the bathroom difficult.

At McMurry University in Abilene, residents are using melted snow and water from a campus swimming pool to flush toilets, with members of the football team and other volunteers carrying water to residence halls.

But the lack of water also means the campus had to shut down a boiler to a residence hall, which supplies heat to those dorms. As a result, the school opened a warming facility for residents.

And they're not the only ones getting creative.

In Crestview, Smita Pande told CNN she and others may have to use melted snow for drinking water when their bottled water runs out.

"We didn't anticipate the water to be shut off, but once it did, we assumed a 'worst case scenario' type of thing and just grabbed snow off the balcony and put into kettles and pots to use for drinking water in case we don't get water back anytime soon," Pande said. "If the power outage is any indication of how long that'll be, then we are going to be boiling snow for a while."

Brenda Aly, of San Antonio, found herself in a similar situation, using pool water from a neighbor and snow to fill toilet tanks and do dishes.

"Every so often we sit in our cars in the driveway for heat, and to charge our phones," she said. "Once we go through our bottled water, our only drinking water option will be snow, until our water comes back or the stores are able to open."

The issue doesn't stop with hydration, though.

Sandra Erickson, who lives in Friendswood, just outside of Houston, said it got so cold in the house she rents with her husband, the pipes burst -- causing the ceiling in three rooms to collapse.

"We could hear water running down between the walls," Erickson said.

Power has just flickered on, she said Wednesday, but they had been without it since Monday. She doesn't have much faith in it staying on, either.

"We are in the house and have the fireplace for some warmth," she said. "We don't have any place to go."

And they're not alone. Hidalgo, the judge in Harris County, said over a million homes haven't had power and are thus experiencing water issues as some pipes burst from the cold.

"So we're seeing the secondary and further effects of the power. The pipes, for example, some burst because of the water freezing," she said. "Others have low pressure because those generators that support the pressure are out. So, many of our cities... are reporting issues."

Millions of Texans are under boil water advisories

As of Thursday, around 13 million Texans were impacted by boil-water notices, said Commissioner Toby Baker of the Texas Commission on Environmental Quality -- a particularly grim number considering many may be without power with which to boil water.

In Waco, Mayor Dillon Meek is urging residents to slow their usage of water, after a false rumor said the water would be permanently cut off.

The city's system needs time to recharge, Meek said, and if capacity went down again at treatment plants, the city would have to go under boil water notices.

Even once the water comes back, the city will be on a boil water advisory, a statement said.