Why U-Haul trucks all have Arizona license plates 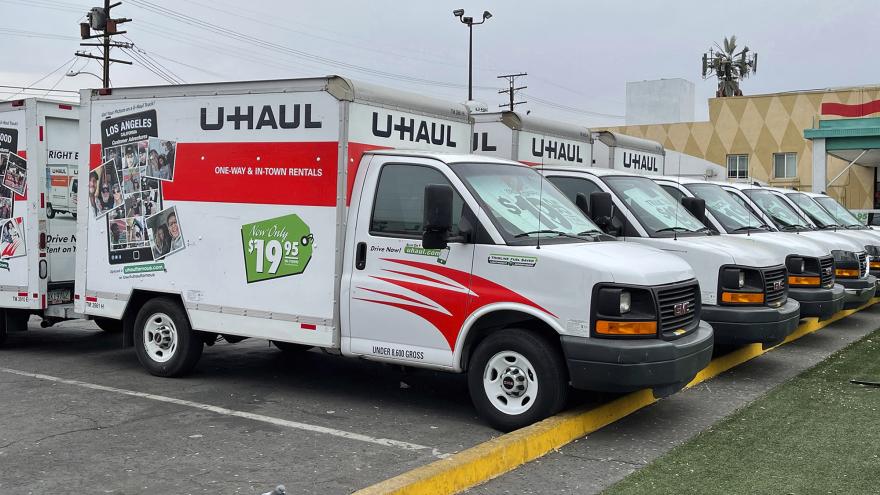 (CNN) -- There are around 175,000 white and orange U-Haul rental trucks in the United States and Canada for do-it-yourself movers. And they all have something strange in common: Arizona license plates with the word "apportioned" slapped on them.

An esoteric agreement between the 48 continental US states, Washington DC and all 10 Canadian provinces determining how big-rigs and other commercial vehicles that travel across state lines divvy up billions of dollars of license plate registration fees.

The issue of U-Haul's license plates took on greater significance last week, after investigators in New York City said they were looking for information about a U-Haul van with Arizona plates in connection with a subway shooting that left more than 20 people injured.

When you register your passenger car, you usually pay a small license plate fee to your state DMV that goes to funding roads, bridges and other public infrastructure projects.

But commercial trucking, rental and leasing companies that use big rigs to transport goods through multiple states operate under a completely different system. These vehicles need special permission to travel across state lines and have to pay higher license fees, often upwards of $1,000 a year.

Such vehicles — known as "apportionable vehicles" — are registered and licensed under what's known as the International Registration Plan (IRP), an agreement created between states in the 1970s.

The IRP allows commercial trucks traveling within the United States and Canada to use one state-issued license plate and registration card but requires operators to pay fees to other states based on how many miles they drive in them and their weight. Some companies keep track of miles manually while others use GPS systems.

So U-Haul, which has been based in Phoenix since 1967, registers all of its rental trucks in Arizona and the state then distributes those license plate fees to other states where the rental trucks travel.

Say, for example, one U-Haul van drove 20,000 miles in a year. If half of the miles were in Utah and the other half were in Colorado, the fees would be split among those two states.

U-Haul, owned by the holding company Amerco, does not disclose how much it pays in registration fees annually or which states receive the most cash. But a spokesperson for U-Haul said it paid "a vast sum of money" in IRP fees.

Although most travelers have never heard of the IRP, it was developed as the interstate travel system expanded.

The agreement eliminated the hassle of trucks having to carrying separate license plates and cab cards for each state they traveled through. It was also designed to ensure that states got a fair share of license plate fees from out-of-state vehicles that were wearing down their roads.

"There are pictures of old trucks with 10 or 12 license plates on the front," said Tim Adams, the CEO of International Registration Plan, Inc., an organization that oversees compliance with the agreement.

Around 3 million vehicles and 350,000 companies were part of the IRP in 2021, Adams said. They paid $3.5 billion in fees that were used to fund highway projects and safety initiatives.

"It generates a lot of money for the road funds each year," he said. The IRP is a "fluid agreement that still has purpose."

In fact, the agreement has worked so effectively that the International Fuel Tax Agreement (IFTA), a similar arrangement between states divvying up commercial vehicles' fuel tax sales, was modeled after it.

So the next time you're playing the license plate game during a road trip and keep passing U-Haul vans with Arizona plates, you can impress your family by explaining why.