Why the stock market feels immune to the pandemic 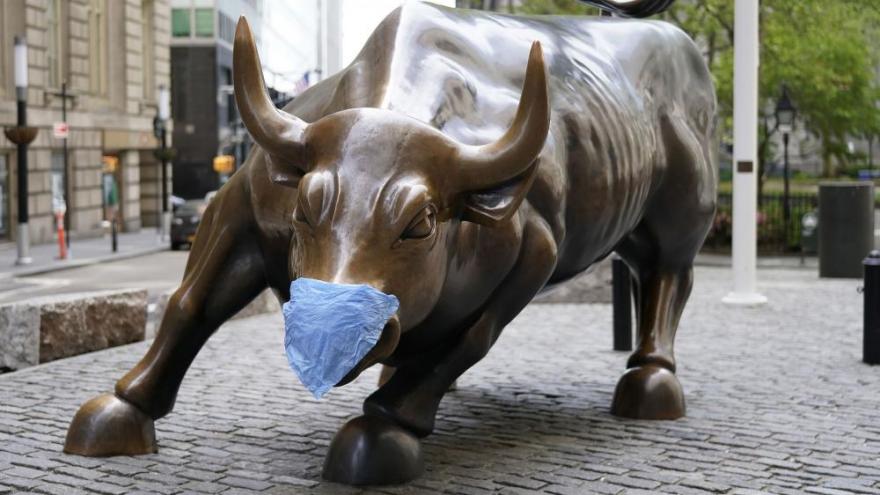 The Charging Bull, sometimes referred to as the Wall Street Bull, a bronze sculpture in the Financial District of Manhattan with a facemask in New York.

(CNN) -- Unless you've been studying birds on a remote island in the South Pacific since last February, you know there's a worldwide pandemic going on that's ground large portions of the economy to a halt.

If you've paid any attention to Capitol Hill, you know lawmakers are having huge problems getting a new $1 trillion-ish stimulus package passed even though Democrats, Republicans, business leaders and the Federal Reserve have all said the government must pump this money into the economy.

But if you're lucky enough to have a 401(k), you may also have been shocked to see your bottom line grow. Maybe a lot.

The stock market is never exactly indicative of the economy, but right now the stock market seems to be operating on its own planet. I went to CNN Business' Matt Egan to understand what the heck is going on.

Our email conversation is below.

WHAT MATTERS: I've read in your reporting and elsewhere that the stock market is not the economy. But this year, the two seem to be completely out of whack. What's happening?

In a nutshell, investors are sniffing out a recovery long before it's felt on Main Street. Wall Street is looking past the intensifying pandemic, and weakening economy, and focusing on six months out. And there's growing confidence that highly effective vaccines will let the economy bounce back during the second half of 2021.

WHAT MATTERS: The market dropped steeply after the 2008 financial crisis. Why has it not been affected by an even more distressing pandemic?

EGAN: Just like during the Great Recession, the pandemic did rock the stock market. At its low point in March, the S&P 500 was down 31% on the year. But the rebound was lightning fast, in part because the economic downturn didn't last as long. The economy was growing, rapidly, by the summer. The V-shaped recovery on Wall Street was also driven by emergency actions by the Federal Reserve and Congress that prevented this health crisis from morphing into a full-blown financial meltdown.

The corporate economy can survive what kills your neighborhood economy

WHAT MATTERS: I'm in the market with a 401(k) and I honestly know very little about what is actually in there. How should people like me view what's going on with the market vs. the economy?

EGAN: It's so important to remember that the S&P 500 represents the fortunes of corporate America, not Main Street. It's made up of some of the nation's largest companies, ones that have the financial firepower to ride out the storm. That means the stock market can go up even while mom-and-pop shops like restaurants are going dark at an unprecedented pace. It's a different universe, for better or worse.

The biggest market winners in 2020 are the companies that actually benefited from the disruption set off by the pandemic. Think: Amazon, Zoom, Peloton, Moderna and Chewy. Companies most exposed to the real economy -- industrials, energy, banks -- have lagged behind. But that should change when the recovery gains steam.

There is a FOMO factor

WHAT MATTERS: To the extent I understand what drives the market, it's usually something along the lines of, "investors were spooked by..." or "investors approved of..." -- as if they're a monolithic being. They're not, but to what extent is there a sort of group-think in play, and who dictates what the group-think will be?

EGAN: "Crowding," as it's known on Wall Street, is a huge factor. At times, investors pile into favorite stocks all at once and then dump them just as quickly. There's not a single person who calls the plays. It's more investors watching the trends and not wanting to get left behind (FOMO). But investors with long-term horizons should ignore these fads (or try to at least) and stick to what they think will work in the long run.

Why does Wall Street care about stimulus?

WHAT MATTERS: If investors are looking at one thing today, it's probably whether or not Congress can or will pass a massive new stimulus package. But that stimulus, while it does offer some help to the airline industry, would do more to help the unemployed and gig workers, who might not be in the market, and small businesses, who aren't listed on the market. Why should the market like stimulus?

EGAN: It's a valid question. One, the market can shrug off short-term economic weakness, but not a total collapse in the economy. And there are growing signs that the job market recovery is stalling out. At some point, that's bound to derail the stock market.

Two, extending unemployment programs will give Americans most in need money they can use to keep spending. And consumer spending is the biggest driver of the economy. The bottom lines of Starbucks, McDonald's and Target depend on it. And lastly, extending aid to small businesses and unemployed Americans could limit bankruptcies and credit card defaults that would causes losses for banks.

What will it take to address inequality?

WHAT MATTERS: I've read a lot this year about how the market may drive inequality since most Americans are not actually in the market. Do you think there are any workable solutions to this issue?

EGAN: The pandemic is undoubtedly widening the gap between rich and poor. And yes, that's partially because millions of Americans can't feel the market boom. Only about half of US families have some level of investment in the market. And the rich have far more skin in the game. The wealthiest 10% of households own 87% of all stocks and mutual funds, according to the Fed. There is no simple fix to this problem -- but it's clearly one that can't be solved by the Fed. Inequality will have to be tackled by Congress and the Biden administration working together.