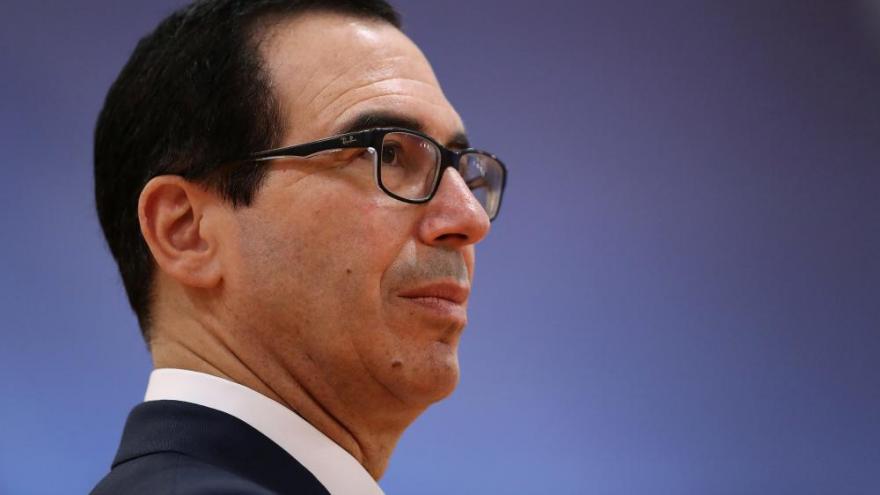 A Capitol Hill impasse. A program that wasn't nearly big enough to start with. Small businesses, already on the precipice of collapse by the thousands, now lacking in the clearest path to survival.

(CNN) -- A Capitol Hill impasse. A program that wasn't nearly big enough to start with. Small businesses, already on the precipice of collapse by the thousands, now lacking in the clearest path to survival.

Washington dysfunction and distrust are coming at the absolute worst time for small business owners that desperately need support.

The backbone program of the $2 trillion stimulus designed to keep workers employed has been shuttered after less than two weeks. Tens of thousands of businesses did not get access to the program before it ran dry. Those businesses, many of them teetering on the brink of failure, currently have no clear pathway to survival at the moment.

Put this into perspective

The purpose of the $349 billion Paycheck Protection Program was essentially to float payroll for millions of small businesses for a couple of months. The loan program transforms into a grant program if the money is used in large part for salaries, payroll costs, mortgage interest, rent or utilities. It was specifically, explicitly, drafted to incentivize companies to keep paying their employees even as their doors were closed.

In the last month, more than 20 million have filed unemployment claims. The central program to keep people in their jobs until the economy reopens is now out of money.

The Treasury Department has requested an additional $251 billion for the program. Based on what CNN has been hearing over the course of the last week or so from participants and analysts, an informal poll of how much the program *actually* needs at this point, given the demand, comes to more than $1 trillion.

"If we want to be realistic about the need out there, that's the real number," one bank executive told CNN.

The lawmakers and aides who drafted this program were always aware it would need more money. As each day passed during the negotiations, it became clear that the economic devastation was moving much quickly than the overall rescue package negotiations were on Capitol Hill. The expectation was the small business program, easily the most bipartisan element of the package, could be refilled with limited disruption if needed. That has turned out not to be the case, as Democrats have made clear they have other priorities they have deemed as equally as urgent that must be added onto additional funds.

Something to keep in mind

This program was structured on a first-come, first-serve basis. That alone has led to a lot of frustration for small business owners, particularly those who don't have longstanding relationships (or lines of credit) with lenders who chose to prioritize clients first.

But there's another issue now: many small business owners have been waiting for more than a week to hear from their lender if their application had gone through. There is no longer a queue to wait in -- the SBA said that has shut down as well. So the process for getting in line, or getting back in line, when additional funds are passed for the program is likely to cause further headaches and frustration for business owners.

Just to underscore why this is so significant right now:

The US is more than a month into stay-at-home and shutdown orders. Read through those statistics again to understand just how devastating this moment is for businesses around the country.

Before running out of money, the SBA processed and approved 1,661,397 loans. For context, the agency approved more loans in 13 days than it had approved in the past 14 years combined.

Roughly 70% of small business owners surveyed by the National Federation of Independent Business applied for the program, and of the 30% that didn't, a third said they planned to apply for the forgivable loans in the weeks ahead.

It's not just PPP

As we've reported several times here, the SBA's Economic Injury Disaster Loan program was also a prime life raft that small businesses were seeking out, particularly given the promises of very fast cash advances. That program, which was overwhelmed by applications and massively oversubscribed, according to officials, is now tapped out as well. Lawmakers are pushing for any agreement on additional PPP funds to also include EIDL funds.

The two programs can conceivably work in concert with one another -- and now both are tapped out.

"Many small business owners planned to rely on the PPP forgivable loans for payroll and the EIDLs for working capital," Kevin Kuhlman, senior director for government relations at NFIB, wrote in a letter to congressional leaders this week. "However, while some small businesses have received approved applications, the vast majority of businesses have not received loans, jeopardizing small businesses and employees who need immediate financial assistance."

The Paycheck Protection Program is officially out of money and everyone agrees that the program deserves to injected with more cash. But negotiations aren't moving quickly. And, despite pressure coming from industry leaders, and the real pain felt by business owners who are stuck in limbo, most aides on Capitol Hill recognize that the soonest this might get resolved is the next pro forma session.

That isn't until Monday.

Aides on both sides acknowledge the divisions here haven't moved much in a week. Democrats want any increase in funding for the PPP to paired with more money for hospitals, more money for state and local governments, and a special set aside for some of the funding in PPP to go directly to benefit underserved communities. Republicans, meanwhile, have continued to argue that money for PPP -- a program that had broad bipartisan support-- shouldn't be used as a tool by Democrats to negotiate money for programs that haven't been exhausted yet.

Treasury Secretary Steven Mnuchin has signaled in recent days he could be amenable to setting some of the SBA money aside for underserved communities, and potentially even increasing funding for hospitals. But there isn't a deal in sight at this point. SBA remains the only program that has completely exhausted its funds, something Senate Majority Leader Mitch McConnell and House Minority Leader Kevin McCarthy have repeated throughout this process to their members and to Democrats.

According to aides in this process, Democrats aren't backing off from their push to get local and state governments more money. That continues to be a red line for Republican leaders who don't think they can pass that proposal with a unanimous consent. Remember, EVERYONE has to agree here.

Mnuchin in the middle

He's been everywhere. He's texting with senators when they have a problem with PPP, he's on cable, at the briefings and leading staff calls with aides to House Speaker Nancy Pelosi and Senate Minority Leader Chuck Schumer negotiating more money for SBA.

Let's say that again: the Treasury secretary of the United States, in the midst of a global pandemic and economic crisis, is calling into staff meetings to talk about ways forward.

"Mnuchin seems to have been made for this moment," one aide said.

That doesn't mean everyone is happy with Mnuchin right now. Republicans feel cut out of his negotiations with Democrats. They don't know if they will be able to back any deal Mnuchin cuts with Democrats. But practically, he's taken the rollout of the stimulus bill seriously, inserting himself into even the minutia of its execution. One person familiar with Mnuchin's role said that during a recent call with Republican members, Mnuchin heard a slew of complaints about issues local banks were having implementing PPP. Mnuchin personally asked members to send a list of specific banks to McCarthy's office. The list was 800 lenders long, but according to the aide, Treasury went through the list in a matter of days.

As one Republican senator put it, no one never expected Mnuchin to be this responsive.

For everything you need to know, read this smart piece by CNN's Katie Lobosco on the "5 reasons you may not have gotten your stimulus money yet."

Democrats were briefed this week on the status of the program and given a rundown of why some checks might be delayed in getting to Americans. First off, if individuals are going to the Internal Revenue Service website and getting a message of "status not available," there could be a few reasons for that:

Primary reason for any delays

Individuals don't have direct deposit info with the IRS and are going to have to wait for paper checks.

When do paper checks go out

IRS told Capitol Hill staffers this week that paper checks should start going out next week. From there, roughly 5 million checks will be sent a week.