Why relief over the Federal Reserve could be short-lived 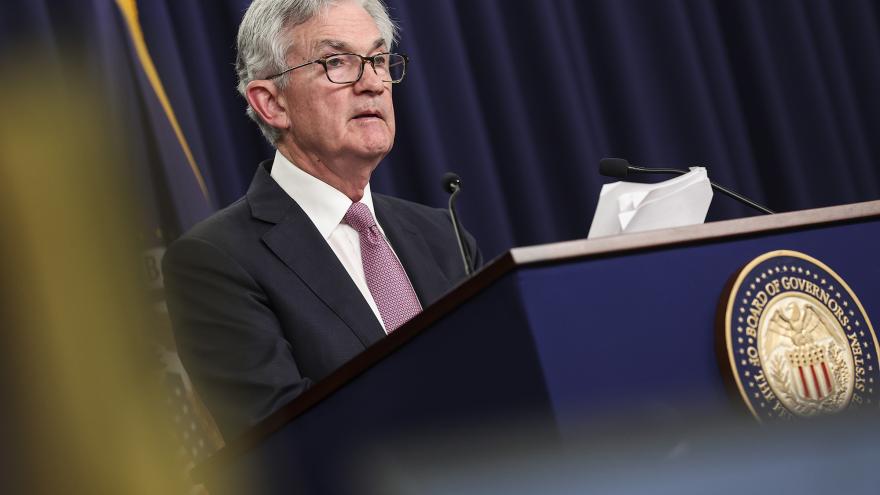 (CNN) -- When the Federal Reserve decides it's necessary to pursue the biggest interest rate hike since 2000, you wouldn't expect a moment of celebration on Wall Street.

But that's exactly what happened on Wednesday.

Breaking it down: Federal Reserve Chair Jerome Powell made clear that the central bank plans to get tough quickly to wrangle inflation. The Fed raised its main interest rate by half a percentage point for the first time in 22 years, pushing it to between 0.75% and 1%.

"I'd like to take this opportunity to speak directly to the American people," Powell said as he kicked off his press conference. "Inflation is much too high and we understand the hardship it is causing, and we're moving expeditiously to bring it back down."

But investors were relieved that he ruled out interest rate hikes of an even greater magnitude.

There had been speculation that the Fed could opt for a three-quarter point increase at an upcoming meeting as it tries to play catch-up. A half percentage point rise is already double what the Fed normally opts for.

Paul Donovan, chief economist at UBS Global Wealth Management, said it was never credible to believe a hike of that size was really on the table.

The market "fed on its own hysteria," he told me.

Powell's remarks provided some clarity at a moment when the Fed's next moves are incredibly uncertain. Yet given the complexity of the broader economic environment, the collective exhale could prove premature, and markets could be in for more volatility.

The Fed wants to put a lid on price increases without hiking rates so much that it causes a recession. That's a difficult maneuver, especially as the global economy slows, and spiking energy prices and the war in Ukraine cloud the outlook. These are factors over which the Fed exerts little control.

Donovan expects the Fed could raise rates by another 0.5 percentage points in June. After that, though, everything looks messier.

"The later we get this year, the less the Fed is likely to be raising rates," Donovan said, noting that the closer the Fed is to a "neutral" rate that no longer provides support to the economy, the more cautious the Fed will need to be to avoid making a policy mistake.

If pessimism about the effects of inflation on economic growth are overblown, the Fed could keep quickly tightening. But if there are signs that a pullback in spending is generating job losses again, it may be inclined to think about reversing course. There's room for error in both directions.

Big picture: The market's single-day rally does little to change the complex dynamics investors have to consider when sizing up stocks right now.

"It seems wishful thinking, at least now, to expect the Fed to thread monetary policy through the eye of the needle and deliver a soft landing," ING strategists said in a note to clients on Thursday.

Not just the Fed: Major central banks around the world are in a similarly tricky position. The Bank of England hiked interest rates on Thursday for its fourth straight meeting. India, meanwhile, just boosted rates at an unscheduled meeting in a surprise move.

Uber is doing much better than Lyft

After getting battered during the pandemic, Uber's business is back on track.

The latest: The company said Wednesday that its revenue grew 136% to $6.9 billion during the first three months of the year, beating Wall Street's expectations.

"After two years of persistent and sometimes unpredictable impacts across our business, our [first quarter] results resoundingly affirm that we're on a strong path emerging out of the pandemic," CEO Dara Khosrowshahi told analysts.

The company's ride-hailing unit has fully rebounded to where it stood in 2019, he added.

Lyft's results, which arrived one day earlier, were less rosy. The company's revenue rose 44% to nearly $876 million. It dropped 10% compared to the last three months of 2021.

Concerns about Lyft's outlook dragged down shares of both companies. Lyft said it plans to invest more in finding drivers to "move our marketplace further into balance."

Watch this space: Uber's ride-sharing business is now roughly the same size as its food delivery business, which it ramped up significantly during the pandemic. Revenue from each unit was roughly $2.5 billion last quarter.

Why the Federal Reserve wants stocks to drop

The rally after Wednesday's Fed decision was good news for investors that had been struggling to get excited about the stock market.

But if shares continue to rise, the Fed itself may be unhappy.

If financial conditions tighten organically, that means the Fed has less work to do, he explained.

In other words, if borrowing costs weren't already ticking up, and the stock market was still looking particularly frothy, the Fed would have to telegraph even more dramatic steps.

"The Fed has to be pleased by the fact that the change in their monetary policy plans has started to affect bond and stock prices in a way that will make it easier for them to get control over an overheated economy," Dudley said.

What happens next: Will conditions keep tightening? Time will tell. The S&P 500 is in the green this week for the first time since early April.

Coming tomorrow: The US jobs report for April. Economists polled by Refinitiv expect to learn that 391,000 positions were added last month.