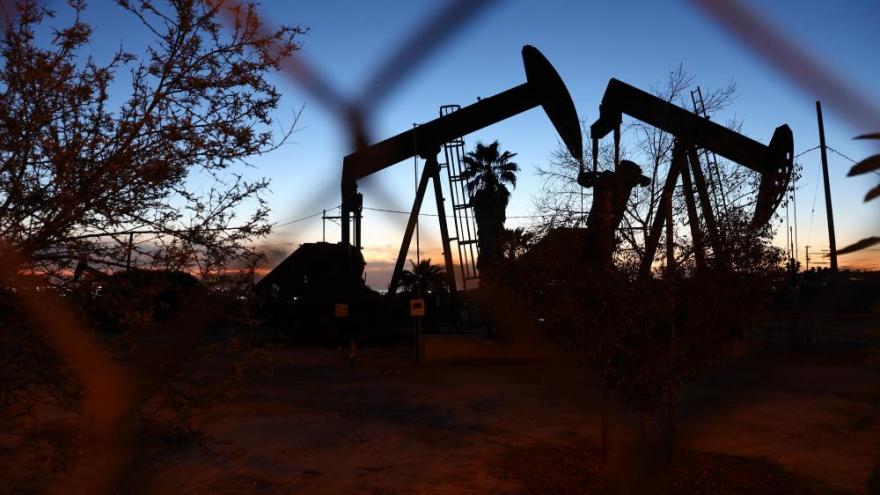 As US oil and gasoline prices skyrocket, politicians in both parties have called for a seemingly easy solution: Drill our way out of the problem to ease prices at the pump and supply additional energy to Europe.

(CNN) -- As US oil and gasoline prices skyrocket, politicians in both parties have called for a seemingly easy solution: Drill our way out of the problem to ease prices at the pump and supply additional energy to Europe.

"The president must end his war on American energy," Republican Sen. John Barrasso of Wyoming said in a recent statement. "Republicans have been demanding the administration take the shackles off American energy producers since President Biden took office. We have the energy at home and we must use it."

Buried under US soil lies an estimated 38.2 billion barrels worth of proven oil reserves that are still untapped, according to the US Energy Information Administration. But there's a big impediment to the US using that oil: It tends to be lighter and different from the heavier imported oil we currently rely on.

The idea that the US can be fully energy independent -- and that it would combat rising gas prices -- is a fantasy, numerous experts told CNN.

"What Americans and US officials really care about is the price of gasoline, and that has almost nothing to do about whether we're energy independent or not," said Bob McNally, president of Rapidan Energy Group. "Can the US wall itself off from volatility in the global oil market? The answer is no."

It's too early to tell whether the current price shock will spur a change in how Americans consume oil, but experts said it's forcing a hard look at how the country uses it.

"The issue the US is grappling with from a security standpoint -- we're dependent on oil," Sam Ori, executive director of the University of Chicago's Energy Policy Institute, told CNN. "The idea that if we produce more oil in some way it would help with that problem -- it's just not true."

There are many reasons for this, but the biggest one is that oil is truly a global commodity, experts told CNN. The global price of oil determines gas prices in the US, and it's impossible to divorce that price from the shifting global dynamics.

"Energy markets are global, the oil market even more so than natural gas," said energy analyst Rachel Ziemba. "It's not really realistic, in my mind, to close [the US] off and be energy independent and say, 'Sorry, guys, we're independent and we don't care about you.' "

"Everybody pays the same price for crude oil," said McNally.

There's also the fact that the US consumes a different kind of oil than it produces. McNally likened the kind of light crude the US produces to champagne, and the heavy crude it imports to coffee.

Importantly, US oil refineries are built to refine this "heavy and gunky" imported crude -- akin to separating out coffee grounds, McNally said.

"Even setting aside the complexities related to crude qualities and refinery diets/configurations and the role of biofuels, the US still needs to import oil as domestic supplies still sit below its gigantic oil demand, despite growing tremendously in the past 10 years," Claudio Galimberti, an oil markets expert and senior vice president of analysis at Rystad Energy, told CNN via email.

Natural gas presents a different picture; unlike Europe, which is largely dependent on Russia for its natural gas supply, the US produces nearly all of its natural gas at home. In fact, one of the short-term fixes to help Europe detach from Russian gas is increasing liquid natural gas shipments to Europe from the US.

But McNally said the concept of "energy independence" doesn't matter for most Americans; what matters are the prices at the pump.

There are also stark climate change implications to new drilling: Last year, the International Energy Agency said no new oil and gas projects should be approved if we intend to keep the global temperature increase below 1.5 degrees -- a critical threshold that scientists warn the planet should stay under.

President Joe Biden, Democrats in Congress and climate advocacy groups have also called for the US to boost the domestic production of renewable energy like wind and solar and to shift the auto industry and consumers toward electric vehicles.

If most consumers were driving electric vehicles, gas-price shocks wouldn't hit so hard.

"Even if we supplied our entire oil and gas needs today domestically, we'd never have full control over the price because Putin's actions factor into the price," Democratic Sen. Martin Heinrich of New Mexico told CNN. Heinrich said cleaner technologies like electric heat pumps and electric vehicles "sever that influence."

Biden's oil and gas permitting at pace with Trump's

Republican lawmakers in particular have blasted the Biden administration for what they have characterized as an energy agenda that prioritizes climate and clean energy action over fossil fuel drilling.

"This is about replacing Russian oil with American and North American resources that this administration has stifled -- let's face it -- in its executive order on public lands, its decision to stop Keystone," Republican Sen. Rob Portman of Ohio said recently. "There are things we can do to get our production back up to where it was."

Biden paused new oil and gas leasing at the start of his administration, but that pause is long gone after a federal judge in Louisiana blocked it. And the most recent delay in oil and gas permitting is the result of a lawsuit brought by Republican state attorneys general.

Now the administration is caught between its short-term goal of easing gas prices and its long-term goal of installing more clean energy and vehicles and cutting carbon emissions.

"I think what they're trying to do now is to recognize that there is a near-term goal of reducing global reliance on Russian energy," Ziemba said. "That both means finding additional supplies of oil and gas from other jurisdictions, including at home, just as it means conservation and consumption changes and additional deployment of cleaner energy."