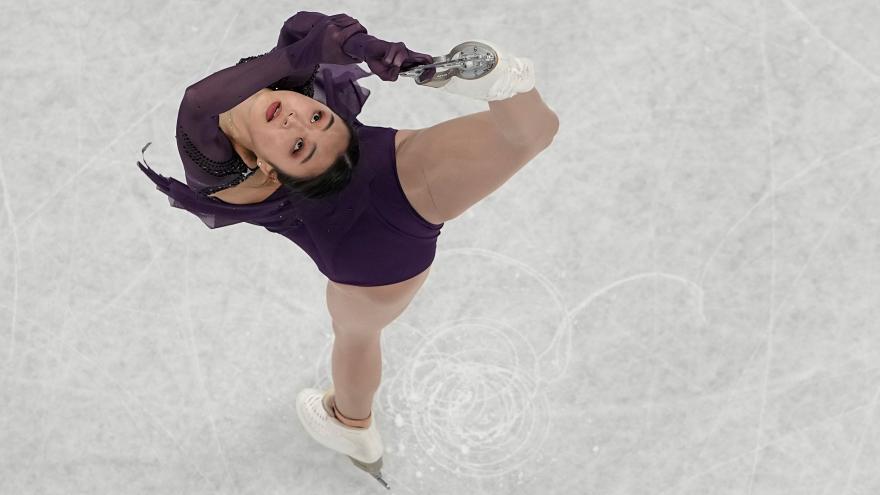 (CNN) -- Top figure skaters spin at such unbelievably fast speeds -- as many as six revolutions per second -- that it can make even spectators feel a little woozy.

Curious viewers of the Beijing Winter Olympics want to know why. "How do figure skaters not get dizzy?" has been one of the top Google searches over the past week.

So how do these athletes pull off such head-spinning moves without toppling over?

As skating events continue in Beijing this week -- the women's free skate program airs Thursday night on NBC and Peacock -- we turned to experts for answers.

Do figure skaters get dizzy?

Not so much, because they've learned how to minimize it.

Although they occasionally tumble upon landing, figure skaters mostly spin through the air without losing their balance. That's because they have conditioned their bodies and brains to quash that dizzying feeling, experts say.

American figure skater Mirai Nagasu, who won a bronze medal at the Winter Olympics in South Korea in 2018, says she feels the rotations but has learned how to recenter her focus over the years.

"I think we have a learned ability against the momentum that hits us while we're spinning," she says.

Kathleen Cullen, a professor of biomedical engineering at Johns Hopkins University, has a more scientific answer. She studies the vestibular system, which is responsible for our sense of balance and motion, and says spinning without stumbling from dizziness is an art perfected over time.

At the start of their careers, skaters and other athletes feel dizzy when they spin around, Cullen says. But ultimately, they train their brains to better interpret that feeling.

"There's a really profound fundamental thing that happens in the brain of people like dancers or skaters over lots and lots of practice. And that's basically a change in the way the brain is processing information," Cullen says.

"When you spin around, you're activating the semicircular canals, rotation sensors. They're filled with fluid and they're sensing your rotation. But when you stop, the fluid has inertia and it tends to continue to move. They actually get a false sensation of movement."

Over years of training, figure skaters' brains have adapted and learned to ignore this error, she says.

"This is done over time with each practice session, day by day, as the brain compares its expectations with what it is actually pulling in from its sensory receptors."

In short, Cullen says, most people feel like the world's still whirling even after they stop spinning. But Olympians, and skaters in particular, generally do not because their brains have changed to suppress the feeling.

Athletes also learn ways to reduce their dizziness. For example, focusing on a fixed reference or stationary object minimizes dizziness and loss of balance.

"Ballet dancers often whip their head around during each turn to fixate a visual reference. Similarly, at the end of the spin, athletes will fixate their eyes at a specific spot on the wall to provide a fixed reference," Cullen says.

The brain and the inner ear are in constant communication with the body and one another to achieve balance, says Brigid Dwyer, an assistant professor of neurology at Boston University School of Medicine.

"For most people, however, dizziness is only a potential issue during faster and more forceful activities," Dwyer says. "Amazingly, when needed, our brains can be prompted over time to better handle the dizzying tasks we encounter."

Here are some other common Google search queries about figure skating:

Why do some figure skaters wear tights over their boots?

Nagasu says it all comes down to personal choice.

Some people wear tights over their boots if their boots are scuffed up, she says. Others, like Courtney Hicks, a gold medalist at the 2013 US International Figure Skating Classic, say wearing tights over boots helps elongate the look of their legs.

But trends have changed in recent years, with a lot of skaters opting to wear tights that show off their boots, Nagasu says.

What's the 'kiss and cry' area?

After their program, figure skaters wait for their scores at the aptly named "kiss and cry" rinkside area. Here, spectators get a glimpse of the athletes at one of their most tense moments.

Many figure skaters celebrate with kisses with their coaches -- although not so much in the pandemic, as they are often masked -- or dissolve into tears of disappointment.

"It's supposed to be a pun. You either give kisses over how happy your score is or it's so bad you literally cry," Nagasu says.

Why do some figure skaters wear gloves?

Skaters can easily take a tumble. And slapping the ice at high velocity is no fun.

"Ice can be rough when you're falling, especially when you're factoring the height at which we fall from and the momentum from our rotations," Nagasu says.

Gloves also keep the skaters' hands warm during the competition.

In a highly competitive sport where the tiniest advantage can make a difference, many athletes are leaving nothing to chance.