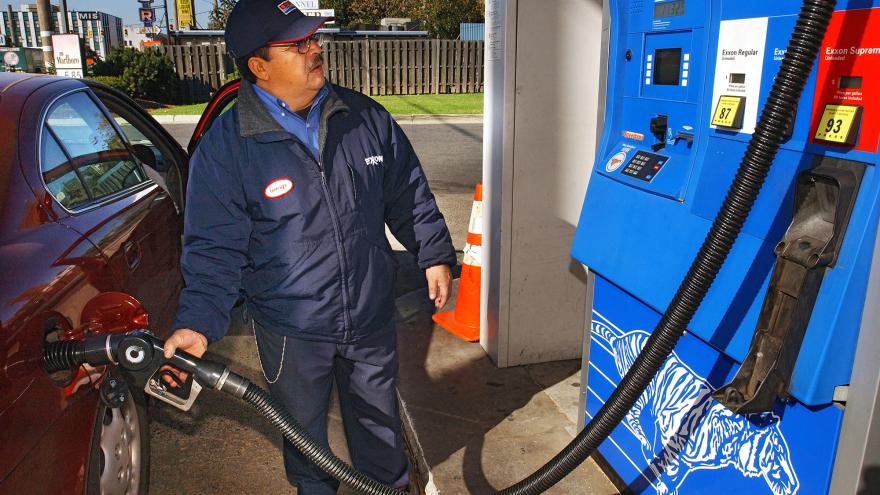 (CNN) -- Most Americans facing record gas prices cringe when they fill up their tanks.

But not people in New Jersey and Oregon. They're not allowed to touch the gas nozzle. Seriously.

In New Jersey, it's been illegal for drivers to pump their own gas since 1949. A ban on self-service gas has been in place in Oregon since 1951, although the state relaxed restrictions for rural towns a few years ago. Violators can be fined up to $500 for breaking these states' laws.

So why don't New Jersey and Oregon let you pump your own gas? And what happened to the days of gas station attendants filling up your tanks in the rest of the country?

It's a strange, complex history that dates back more than a century.

The United States has experimented with self-service gas since the first stations were built in the early 1900s. Yet it wasn't until about 1980 that self-service became the primary gas station model in this country.

"Their rise to the top was not a smooth one," write Ronald Johnson and Charles Romeo in a 2000 study on the growth of self-service.

The earliest self-service gas pumps in the United States appeared around 1915. They were designed primarily for emergencies or for after dark when gas stations were closed. People would pre-pay with coins to operate them.

Fuel sales have slim profit margins. Gas stations made their money and distinguished their brands by offering a variety of services such as oil and battery checks, windshield wiping and vehicle repairs. Station attendants in full uniforms -- some wearing bow ties -- filled up customers' tanks, a key part of their larger service strategy to attract drivers in the first half of the 20th century.

Full-service gas stations played up safety hazards around self-service, arguing that untrained drivers would overfill their tanks and start a fire. With support from local fire marshals, gas stations lobbied state legislators to pass bans on self-service. By 1968, self-service was banned in 23 states.

It was not until the success of self-service internationally and a crucial change in gas stations' business model that self-service began replacing attendants in the United States.

"Modern self-service gas stations actually were pioneered in Sweden," said Matt Anderson, the curator of transportation at The Henry Ford museum in Michigan. "Drivers there paid less for self-service than for full-service. From there the concept spread through Europe."

At the same time, vehicle warranties began to stipulate that cars must be serviced at dealerships, a shift that eroded gas stations' service and repair business.

"Traditional full-service gas stations lost their profit center in automotive repairs and were forced to change their method of operation," said Wayne Henderson, the author of the book "One Hundred Years of Gas Stations."

Gas stations had to look for new ways to grow profit. They moved to self-service, which reduced their costs and increased volumes on gas sales, and they diversified into selling food, tobacco, coffee, snacks and other items with higher margins.

Self-service "ended up being more popular because it could create large volumes and opportunities for other profit," said Gary Scales, a doctoral candidate at Temple University writing a dissertation on the history of gas stations.

Gas station operators began pushing states to repeal their self-service bans. By 1992, around 80% of all gas stations nationwide were self-service, up from just 8% two decades prior.

Despite frequent legislative attempts, court challenges and opposition from the gas station industry, New Jersey and much of Oregon still don't permit self-service.

Oregon's law says it's in the public interest to maintain the ban. Allowing self-service would increase fire hazards, create challenges for elderly citizens and drivers with disabilities and lead to gas station attendant job losses, according to the stature.

In 1982, Oregon voters defeated a ballot measure to overturn the ban, but more recent polling shows attitudes in the state are split. A 2014 poll found that Oregon residents were almost evenly divided on the subject, with 44% backing a move to self-service and 46% in favor of keeping the ban.

Oregon relaxed its ban in 2018, allowing self-service for drivers in rural counties with populations under 40,000.

In New Jersey, the self-service ban, along with the state's reputation for low gas prices, is part of its culture. "Jersey Girls Don't Pump Gas," proclaims a popular bumper sticker.

Attempting to overturn the ban has been seen as a loser politically.

"On self-service gas, that's been sort of a political third rail in New Jersey," Gov. Phil Murphy said in April.

But record gas prices and gas stations' struggles to find workers have led to renewed attempts by New Jersey gas station industry advocates to lift the ban. In May, 75 gas stations in the state lowered prices in an effort to gain support for allowing self-service gas.

It's unlikely that the state will allow drivers to pump their own gas anytime soon, however. The president of the state's Senate opposes a bill that would end New Jersey's ban.

The state's residents have little interest in self-service. A March poll found that 73% of them say they prefer having their gas pumped for them.

"There is apparently one thing all New Jerseyans can agree on nowadays," Ashley Koning, the director of the Eagleton Center for Public Interest Polling at Rutgers University-New Brunswick, said when the poll was released. "And that's the time-honored Jersey tradition of having your gas pumped for you."