Why more air travel chaos is on its way 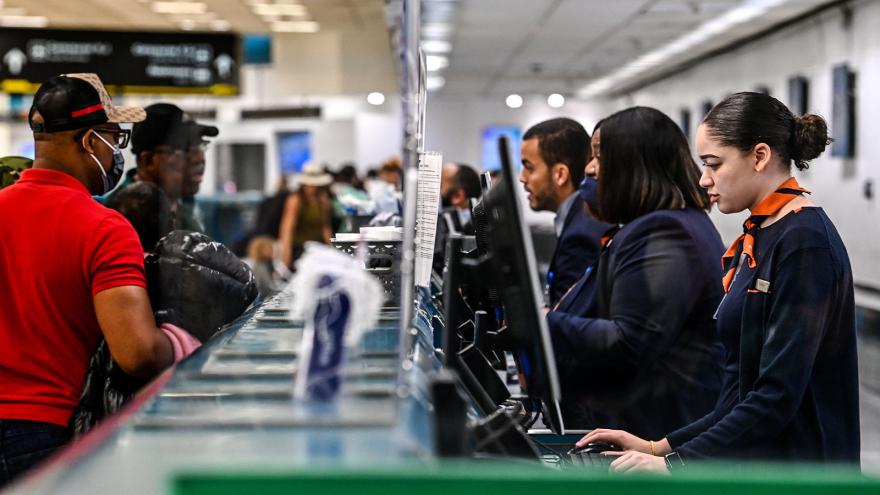 (CNN) -- Now is the summer of our discontent, Shakespeare didn't exactly write in "Richard III," but for airline travelers in the US and Europe that's exactly what this summer is shaping up to be.

Flights are vanishing from the schedules -- some at the last minute as airlines fail to offer the services that travelers have spent significant amounts of money on, often in the hope of enjoying their first escape in years. More than 1,500 flights were canceled in the US alone this past Saturday and Sunday, and the US is heading into its busy July 4 holiday weekend.

Delta Air Lines has trimmed about 100 flights a day from its schedule in July to "minimize disruptions" and has issued a waiver for July 4 travelers as it braces for passenger volumes "not seen since before the pandemic." Air Canada has said it will cancel up to 10% of flights in July and August, roughly 150 a day.

At airports, scenes of passengers lining up out of terminal doors or camping out in departure halls are increasingly familiar as delays with security, check ins and immigration add up to more mayhem.

Passengers have been asked to turn up even earlier to make their flight, and then to add to the confusion, asked again to turn up not too early. "Please consider that you are only welcome at the departure hall 4 hours before your flight," Amsterdam's Schipol Airport advised this week.

And then there's the luggage problem. At London's Heathrow airport, photographs showing huge piles of bags separated from their owners have become emblematic of the experiences of many fliers facing the frustration of trying to claim lost possessions or wait days to be reunited with them.

All in all, air travel is a bit of a nightmare -- even a gamble -- right now. And high season is only beginning.

There are apparently no quick fixes. This week, German airline Lufthansa warned passengers in an email that the situation was "unlikely to improve in the short term," insisting stability would only be reached in the winter.

"Too many employees and resources are still unavailable, not only at our infrastructure partners but in some of our own areas, too," it said. "Almost every company in our industry is currently recruiting new personnel, with several thousand planned in Europe alone."

Even when the problem is principally airport-related, that can also mean flights delayed and canceled. Dutch carrier KLM was recently forced to scrap all inbound European flights to Amsterdam, apparently because of airport crowding.

So what's going on? Much of commercial aviation is almost actual rocket science, but the set of problems that airlines and airports are currently experiencing are not that. Instead, it's about a much more normal business problem: staffing.

And the aviation industry should've seen it coming.

"Between their own research, research that my company and others have conducted, and their reservations systems, airline executives should have seen -- and thus should have known -- that there would be strong demand to travel again," says Henry Harteveldt, principal at market research and advisory firm Atmosphere Research.

"Either they didn't look at their own data, or misread or misinterpreted it, but none of this should have been a surprise to airlines."

In almost every case, the problem is that too many experienced people were let go during the pandemic -- either laid off or given a voluntary out -- and that airlines, airports, and other key parts of the aviation system have not hired and qualified enough people to replace them.

That qualification point is important. As airlines and airports know all too well, there's a whole process involved to get someone the kind of security pass that allows them to work on an airplane or at an airport gate.

In the UK, there's also the fact that they can't draw on the pool of European Union workers after Brexit.

There's also often some fairly complicated training involved in actually doing the work, not least since the look and feel of a lot of air travel computer systems seem to look more at home in the 1980s than in the modern iPhone or Android world.

Addison Schonland, partner at aviation analysis and reporting firm AirInsight, sums up the likely affected sectors as "any part of the air travel system that has employees."

"Layoffs are easy, bringing people back with appropriate security clearance is hard," Schonland says. "Also the US airlines in particular have a reputation for being unreliable employers -- the boom and bust cycles mean wobbly careers -- plus the work requires skilled people and is trying work. These people have likely more attractive options now."

Some of the problems are around too much outsourcing.

At many airports, particularly in Europe, key tasks like check in, security, baggage, gate and airport operations are done by staff who work for third-party companies that airlines and airports contract in. You'll often spot them in a bland uniform that isn't the same as your airline's own employees.

These folks do work that is actually pretty hard in some cases -- like lifting bags outside in snow and sunshine, working before dawn and late into the evening, and dealing with increasingly frustrated passengers.

Some of it is also a real question of labor relations.

For example, during the pandemic, British Airways asked some UK employees to take a 10% pay cut. Some workers have since had their wages raised, but not check-in staff at Heathrow, who are now willing to strike to get it. British Airways has said it's disappointed with the move and hopes to find a way to avoidindustrial action.

No matter which side of the Atlantic you're on, it's a recipe for disruption.

In the US, the Federal Aviation Administration is facing problems due to a shortage of air traffic controllers, says Atmosphere Research's Harteveldt.

"The FAA is actively hiring people to become air traffic controllers, but the training process takes time. Meanwhile, airlines schedule more flights to some destinations, especially Florida, than the FAA can handle.

"So even when weather is good, the FAA on occasion has to give some flights longer, less direct routings that may lead to delays, in order to spread the burden across their air traffic control centers."

So what should fliers do?

The best advice I can give you as an aviation journalist who's never seen this much disruption is to book defensively.

-- Consider alternatives to flying, if your journey is possible in under eight hours by train, boat, bus or car. If you're not traveling with people who have to be back at school in the fall, consider a trip in September or October rather than July or August.

-- If you have to fly, choose nonstop flights over connecting flights if available and affordable. Connections add complexity and increase vulnerability to cancellation or delay, particularly those via places that can experience severe weather problems in summer.

-- In Europe, choose the smaller hubs with reputations for efficiency and no recent major disruption reported: Munich, Zurich and Vienna are the safest bets.

-- Choose flights earlier in the day rather than later -- that'll mean more options for travel that same day in the event that your flight is canceled or significantly delayed. Tight connections -- anything less than a couple of -- should be avoided if possible.

-- Opt for airlines offering many flights per day on a route rather than those with just one or two.

-- Research what other options are on a route. If you turn up on the day and there are thunderstorms in Dallas or Houston, can you ask the airline agent to route you through Chicago, Philadelphia or Dulles instead?

-- Some airlines offer fast-track check in and security, lounge access and priority boarding as a buy-up extra, and that's a better deal than ever. Or in the US, consider TSA PreCheck. Log into your reservation every few weeks to see if there are discounted upgrade options: It'a a great time to splurge for extra comfort and fast-track benefits.

-- Join your airline's frequent-flier scheme. Not only will you get some miles but most rebooking systems will prioritize frequent fliers in some way -- even the ones whose mileage balances are low. Also use the airline's app, which will make any rebooking easier.

-- In the event that the rebooking options in the app don't work, phone calls or social media can work. Airlines often respond to direct messages via Twitter. The platform is also good for airline, airport or even weather updates.

-- Pack light and opt to carry-on only, if you can. If you need to check bags, keep a few days' clothes and any essentials in your carry-on. Bring snacks, chargers and load up your devices with TV and movies. And bring the most important thing this summer -- and any time you're traveling: patience.

Good luck, and feel free to ask questions on Twitter, where you can find me as @thatjohn.