Why modern airplanes have winglets 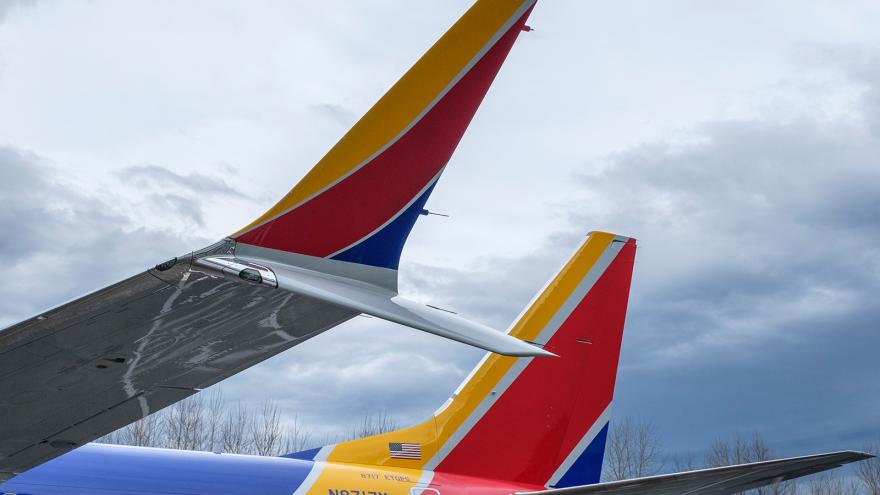 (CNN) -- What caught your eye the last time you looked out of your airplane window? It might have been the winglet, a now ubiquitous appendage at the end of each wing, often used by airlines to display their logo and put their branding in your travel pictures.

But the winglet isn't there for marketing purposes alone -- it actually saves fuel. On average, an aircraft equipped with them can use up to 5% less fuel, and for a typical Boeing 737 commuter plane that can mean 100,000 gallons of fuel a year, according to NASA. The collective savings for airlines are in the billions of dollars.

They do so by reducing the natural vortices that form at the wingtips, which can be so strong that smaller aircraft can even flip in mid-air when crossing the wake of very large planes. The effect is so obvious that aerodynamicists were thinking about it even before the Wright brothers completed their first flight. The widespread adoption of winglets, however, is far more recent.

As air flows around a plane's wings, it generates high pressure on the bottom surface and low pressure on the top one, which creates lift. But once the air flowing at the bottom reaches the wingtip, it tends to curl upwards and meet the lower pressure air at the top, generating what is essentially a small tornado. This extends behind the aircraft producing drag, which equals a loss of energy.

"That energy that's being left in the air is coming from the aircraft," says Al Bowers, a former chief scientist at NASA's Neil Armstrong Flight Research Center. "If there were a way to capture more of that energy and keep it on the aircraft, that would result in less energy being wasted in its wake."

In 1897, British aerodynamicist Frederick W. Lancaster patented "wing endplates," vertical surfaces to be placed at the end of wings to stop the airflow from the bottom and the top from meeting, reducing drag. "Endplates in many ways act much like winglets do, but the improvement to the lift is rather poor, because flat plates by themselves are not very good aerodynamic surfaces," explains Bowers.

The idea was refined for modern aircraft in the 1970s by NASA engineer Richard Whitcomb, who imagined vertical wing extensions inspired by the way birds curl up the end of their wings when in need of lift.

"It was Whitcomb who developed the idea that these should be much more aerodynamic surfaces, actually wing-shaped themselves," says Bowers. "He realized that setting the angle correctly on them would result in a dramatic drag reduction." The name winglet, meaning little wing, naturally followed.

Whitcomb tested the idea in a wind tunnel and found that winglets could achieve a reduction of drag of about 5%. At the same time, winglet research was happening independently of NASA, and business jet manufacturer LearJet was the first to mount winglets on an actual aircraft, in 1977. Two years later, NASA first flew an Air Force KC-135 test plane -- not too different from a Boeing 707 airliner -- equipped with nine-foot-high winglets. Over 47 test flights, NASA confirmed Whitcomb's wind tunnel findings.

Despite the encouraging results, winglets didn't immediately attract interest from airlines, because they still added extra weight to the plane and were expensive to install.

"In the early days, even after Whitcomb, the engineering tools used to design them weren't all that good and the mantra was 'winglets help at low speed but they hurt at high speed,'" says Mark D. Maughmer, an expert in winglet design and a professor of aerospace engineering at Penn State.

"So they didn't find their way onto commercial transports at that time because airlines didn't want the penalty of the winglet."

Things changed when a company called Aviation Partners designed the "blended" winglet. Founded in 1991, it hired former Boeing aerodynamicist Louis Gratzer, who in 1994 received a patent for a new type of winglet design that flows smoothly out of the wingtip, offering a significant increase in efficiency compared to the previous, more angular versions.

The first plane to use the blended winglet was the Gulfstream II, a twin-engine business jet with a maximum capacity of 19 passengers. Soon after, Aviation Partners looked to expand into bigger aircraft and started working with Boeing, which had demonstrated interest in winglets by putting them on the 747 for the first time in 1988.

"The entry point with Boeing was the Boeing Business Jet, which is basically a 737," says Mike Stowell, CEO of Aviation Partners Boeing, a joint venture between Boeing and Aviation Partners. It was formed in 1999 and designs winglets that Boeing installs directly at the factory on new planes, and also retrofits existing Boeing aircraft with blended winglets (a 737 retrofit typically costs $750,000).

According to Stowell, some of the appeal of blended winglets is based on their sleek appearance, not just the fuel savings.

"I think some of the [early business customers] wanted a different look -- they didn't want their plane to look like a commercial aircraft," he says. "So for the private guys it's probably a blend of range and looks, keeping up with the guys next door. For the commercial guys, probably not.

"We asked one major airline about a specific shape we were looking at, and the quote from the CEO of the airline was 'You can put a piano out on the end of the wing -- if it saves fuel, we don't care.'"

Aviation Partners says it has fitted 10,000 aircraft with their winglets -- in the 737, 757 and 767 families, as well as business jets -- which they estimate has saved a total of 13 billion gallons of fuel.

They have since created updated designs, including the "split scimitar," designed for the 737, and the "spiroid" winglet, used on some business jets, which includes a loop. The designs are all meant to further improve efficiency and decrease fuel burn.

Unlike Boeing, Airbus was a late adopter of winglets and remained unconvinced of their benefits well into the 2000s. In 2011 it first flew their own winglet design, calling it a "sharklet." "Airbus was late to the game, but they caught up fast," says Maughmer.

The A320 family -- currently the world's best-selling airliner with over 16,000 orders -- started having sharklets as an option in 2012, while existing A320s have been retrofitted since 2015. Airbus promised a 4% decrease in fuel burn and a saving of 900 tonnes of CO2 per aircraft per year.

In 2013, with the A350, Airbus further refined its winglet design, which was no longer a separate appendage but rather a "smooth three-dimensional twisting of the basic wing shape." The new design was also applied to the A320neo, a newer version of the popular plane with better engines, which now comes with sharklets as standard.

Winglets are now found on almost every small and mid-sized jet in the world, although their efficacy on bigger aircraft is less obvious.

"They help the climb, but they hurt the cruise," summarizes Maughmer, explaining why planes that perform mostly long haul flights, therefore spending most of their time in cruise, might benefit less from winglets.

As a result, models such as the Boeing 787 and 777 don't have winglets, but rather raked wingtips, or wingtips that have more backward sweep compared to the rest of the wing -- a design that is more efficient during cruise to suppress wingtip vortices. The fuel savings are comparable to winglets.

If you're a frequent flier, you might also like to know that winglets can make turbulence a bit more bearable, according to Bowers: "They improve the directional stability of the aircraft," he says.

"I once flew on two different 737s on a trip one time, and one had winglets while the other one did not. The difference was quite dramatic: the one without winglets rode a little harder in turbulence. It was like riding in a sports car on a bumpy road, compared to a luxury sedan."