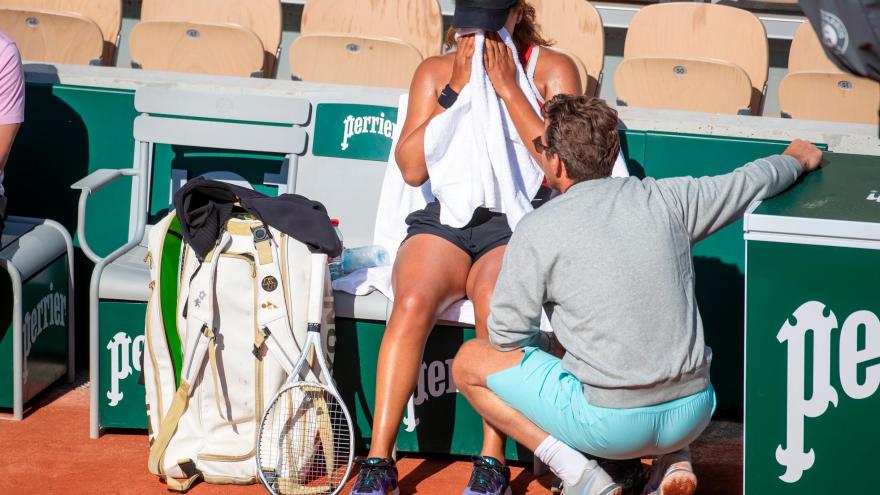 Editor's note: For more on athletes and mental health, tune in to CNN this Sunday for "United Shades of America with W. Kamau Bell" at 10 p.m. ET.

(CNN) -- One year ago, Simone Biles suddenly withdrew from the Tokyo Olympics after struggling with the "twisties" -- leaving the other members of Team USA to compete without her.

Biles' move rippled across Tokyo and the world. In an emotional interview after her withdrawal, Biles said she needed to protect "her body and mind."

"Whenever you get in a high stress situation, you kind of freak out," she told reporters at the time. "I have to focus on my mental health and not jeopardize my health and well-being."

For longtime fans of gymnastics, Biles' move was somewhat unprecedented. At the 1996 Olympics in Atlanta, for example, Kerri Strug famously broke her ankle on the vault but continued to perform injured. Team USA won gold that year. Strug retired shortly after.

Athletes are often rewarded for giving everything to their sport, regardless of the mental health impact. Coaches demand it; fans demand it.

But in recent years, a shift is occurring. In a new episode of "United Shades of America," airing Sunday on CNN, host W. Kamau Bell digs deep into the intense pressure facing some of the country's beloved athletes -- and the real mental health cost of winning.

Athletes are seen as entertainers rather than humans

Biles' withdrawal was one of the most high profile cases of an athlete speaking up about their mental health, but she's not the only one to do it.

Tennis star Naomi Osaka has been open about her struggles with depression, going so far as to withdraw from the French Open in 2021. This year, Brooklyn Nets' Ben Simmons said he "had some dark times" during his high-profile feud with his former team the Philadelphia 76ers. And at the Winter Olympics in Beijing this February, athletes from multiple sports spoke up about the pressures facing Olympians.

"I feel like it was a game changer," snowboarder Anna Gasser told the New York Times, of Biles' withdrawal in Tokyo the year before. "Simone Biles's message was that we're not just athletes — that we are also humans and not robots."

But that message hasn't always existed in the past. Especially considering how much money many athletes make, there can be a tendency to put pressure on sports stars to perform no matter the cost.

"(There's) this idea that your health is irrelevant," Renée Graham, a columnist and editor at the Boston Globe, told Bell. "That your job is to be a show horse and get out there and entertain the people, and you make a lot of money to do that. That ugliness is impossible to divorce from what professional sports is."

Strug, the gymnast who performed on a broken ankle at the Olympics in 1996, told her coach -- Bela Karolyi -- that she wasn't sure she could do the stunt on her injury. But Karolyi said she could, in a move that at the time was considered good coaching, Bell said.

Since then, there have been many reports and allegations of Karolyi being physically and verbally abusive to the women he coached. In response, Karolyi once said: "My gymnasts are the best prepared in the world, and they win. That's all that counts."

For athletes of color, racism can make mental health issues even worse as they also confront all the typical challenges of their profession.

"Too many times we think of things like 'this is racism' and 'this is mental health,' and they're separate," said Kristi Oshiro, an assistant professor at Belmont University who has studied racism and its impact on athletes. "But in reality, it's really complex and they inform one another."

Serena Williams, one of the greatest tennis players of all time, faced racist abuse from tennis fans back in 2001, in a finals match against Kim Clijsters at Indian Wells. Though Williams, just 19 years old at the time, won the match, she refused to play the tournament again until 2015.

"It has been difficult for me to forget spending hours crying in the Indian Wells locker room after winning in 2001, driving back to Los Angeles feeling as if I had lost the biggest game ever -- not a mere tennis game but a bigger fight for equality," Williams said about her return. "Emotionally it seemed easier to stay away."

The implications of the intersections of racism and mental health exist at all levels of play, Oshiro said. With professional athletes, though, the strain can be more intense.

"For professional athletes it's a little distinct and different because they're expected to compete and consistently perform at this ridiculously elite level of play, all while being open or vulnerable to criticism from people around the world," she said.

And in the age of the internet, that criticism can come from anywhere -- both in person and online.

Grant Williams is an NBA player for the Boston Celtics. He pays attention to all the comments he gets from fans, he told Bell, particularly if they're racist.

"It's hard not to notice it," Williams said.

With more athletes speaking up about the mental health pressures of their sport, the diversity of their stories is striking. From Biles and Osaka to the NBA's Kevin Love and former college volleyball player Victoria Garrick -- athletes across a range of ages, races and sports have all opened up about their mental health struggles, highlighting the assorted ways these issues can manifest.

Oshiro is a former college athlete herself, having played softball at East Carolina University. Just in the last 10 years, she said, conversations about mental health have evolved for the better.

"When I played in college, we not only lacked the relevant resources but the awareness and also the language to describe the mental health struggles or even the racism that we endured at the time," she said. "It was like you knew you were going through some things, but you didn't know it was maybe depression or anxiety."

To create sustainable change around perceptions of athlete mental health, Oshiro said, everyone involved should reconsider the ways they think and talk about athletes -- from fans to stakeholders. Even organizations can do a better job of explicitly not tolerating racism that can often be imposed on athletes of color.

But that's not all that can be done. Access to mental health resources is also important, Oshiro said.

"When you look at how many things are available for athlete physical health -- training facilities, weight rooms, so on and so forth -- there's a lot of work that needs to be done to make sure it's even for mental health, too," she said.

And if we can't care about both their physical fitness and their mental well-being, as Bell notes in Sunday's episode, then maybe we don't deserve athletes at all.