Why Italy's 'king of chocolate' is so delicious 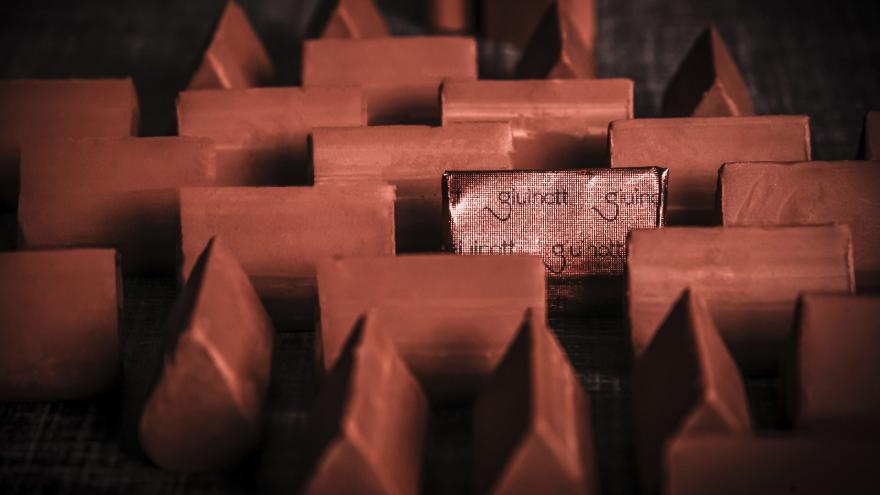 (CNN) -- There's chocolate, and then there's gianduiotto chocolate. An ancestor of Nutella, the melt-in-the-mouth treat is as rare as it is delicious.

Like most renowned Italian artisan chocolate, gianduiotto originates from Piedmont, Italy, where it's considered the "king of Italian chocolate."

Made of a rich paste consisting of fine cocoa mixed with the premium hazelnuts that grow in Piedmont's Langhe region, it's hugely popular with locals.

Some have it with an espresso for breakfast, and/or after a meal, along with snacks and aperitifs.

Usually wrapped in a thin silver, golden or colored aluminum foil, the ingot shape treat has been produced by local chocolatiers here for centuries.

Its birthplace is the region's capital, Turin, which has been known as Italy's "chocolate capital" ever since maître chocolatiers began making their sweet artisan delicacies for the House of Savoy, the royal dynasty established in the Savoy region of Italy, here in the 1500's.

The name gianduiotto is thought to come from carnival figure Gianduja, a jolly wine-loving peasant, popular in the 1800s, who embodied the epicurean nature of locals.

Initially called givù (or stubs,) gianduiotto became famous when the general public apparently got their first real taste as the treats were handed out during Turin's 1865 carnival celebrations by an actor dressed as Gianduja.

According to revered artisan chocolatier Guido Castagna, gianduiotto is far more than just an iconic chocolate. It's a symbol of Turin, and a big part of the city's identity.

"Poor gianduiotto, it was born as a second class surrogate for cocoa," Castagna tells CNN.

"It had humble origins but then became an elite, niche product of the highest quality, the first ever to be wrapped [in foil] in the history of chocolate."

Gianduiotto was originally born out of necessity -- to overcome a cocoa shortage in mainland Europe.

When Napoleon Bonaparte conquered northern Italy and declared war against Britain in 1806, he banned all English-imported goods, including cocoa beans.

As a consequence, pastry makers in Turin decided to switch to something a little closer to home -- the hazelnuts that grew in abundance in the surrounding lush hills.

After mixing them with sugar and the very little cocoa they still had on their shelves, they were able to create a rich paste that was eventually refined and honed into gianduiotto.

A century or so later, Pietro Ferrero, a confectioner from Piedmont, created Nutella based on that old recipe.

Back in the 1800s, hazelnuts were very affordable, says Castagna, but things are very different now. Not only are they far more expensive, but the "tonda gentile" hazelnuts produced in Langhe have Protected Geographical Indication status, a European designation aimed at protecting regional foods.

"They're Piedmont's gold, absolutely the best in the world," he adds, before explaining that the hazelnuts are priced at €16 per kilogram versus €10 per kilogram for high quality cocoa.

Rich in aromatic oil, they blend perfectly with, and exalt the flavor of the cocoa butter, creating a tender, voluptuous and creamy concoction.

The most savory artisan gianduiotti are those with the highest percentage, usually between 25 and 40%, of hazelnuts.

Castagna uses a sophisticated mechanical procedure called "extrusion," where semi-solid tidbits of gianduia paste are squeezed onto a tray into the form of gianduiotti.

In the old days, making gianduiotti was something of a ritual. The process involved repeatedly battering the hazelnut paste to give it consistency and then kneading it as though it were pizza flour.

Women, known as "gianduiere," would sit in pairs around a table with the gianduia paste positioned in the middle.

They'd then scoop it up with two long spatulas, roll it over several times, and cut off tiny morsels with a butter knife, dropping them onto a tray to solidify.

Grandmothers would regularly treat their grandchildren to packages of fresh, delicious gianduiotti, which they'd pick up at the chocolate makers, usually right after stopping at the bakery.

Up until the 1960s, Turin was dotted with hundreds of artisan boutiques. But as labor costs rose and mass production kicked in, they began to disappear.

Now there's just one left -- the A.Giordano boutique. Only a handful of gianduiere remain at the historic chocolate lab, which was founded in 1897.

"We are the only ones who still hand make gianduiotti. It's very expensive to employ such skilled labor," says owner Laura Faletti.

"It's a job only women can do, for it requires a lot of passion, patience and precision. A bit like hand stitching. It can be quite tiresome, I need to rotate my gianduiere in shifts otherwise their hands get muscle cramps."

To create gianduiotti, they press the gianduia mix into lasagne-like sheets. These sheets are then shredded and beaten into a paste on an old granite basin, just like those used in the past, says Faletti.

Gianduiera Ambra Nobili, 32, has been making A. Giordano's gianduiotti ever since she graduated from a local pastry academy.

"It's a chocolate of prestige, I've always loved it," says Nobili. "I'm filled with joy when after a hard day's work, cutting and shaping 48 kilograms of gianduiotti with another gianduiera, I finally see how perfect and beautiful they look, and how I'm constantly improving."

The secret of the craft, says Nobili, lies in the firm and rapid movement of the wrists and hands to scoop up the paste before it solidifies, smooth it over with spatulas and give it final cut with a butter knife to achieve the prism-like shape.

"If the cut isn't perfect, the gianduiotto will be too tall, or too short, and will not fit into the golden aluminum wrap, which is tailored to a specific size," she explains."I also hand wrap each single one of them."

Gianduiotto isn't available all year round. Artisan boutiques halt production when spring is near to avoid selling melted chocolates, which is actually another gourmet delicacy made with the gianduia hazelnut paste.

For those who prefer their chocolate in a Nutella-style spread, gianduiotto has its own version, "crema spalmabile di Gianduja," with a slightly granular texture that tastes wonderful on bread.

Like gianduiotto, crema spalmabile di Gianduja is made with painstaking precision.

"Our spread is the end product of 72 hours of mechanically mixing and kneading the paste -- that's three whole days, while other gianduia spreads are ready in four hours. Ours is fresher and healthier," says Faletti.

While Faletti's spread is made with 40% gianduia hazelnuts, Castagna's contains 68%.

Other chocolatiers have also experimented with new gianduiotto blends, and sizes. You can even get orange-flavored gianduiotti, as well as huge ones weighing between 250 grams and 1.2 kilograms. But the pocket-size treats are still the most popular.

Appendino also produces mini gianduiotti, which are slightly smaller than the traditional treats.

But as Italians say, "one chocolate calls for another," and when it comes to gianduiotto chocolate, it's hard to resist the temptation to eat the whole lot, no matter what size they are.