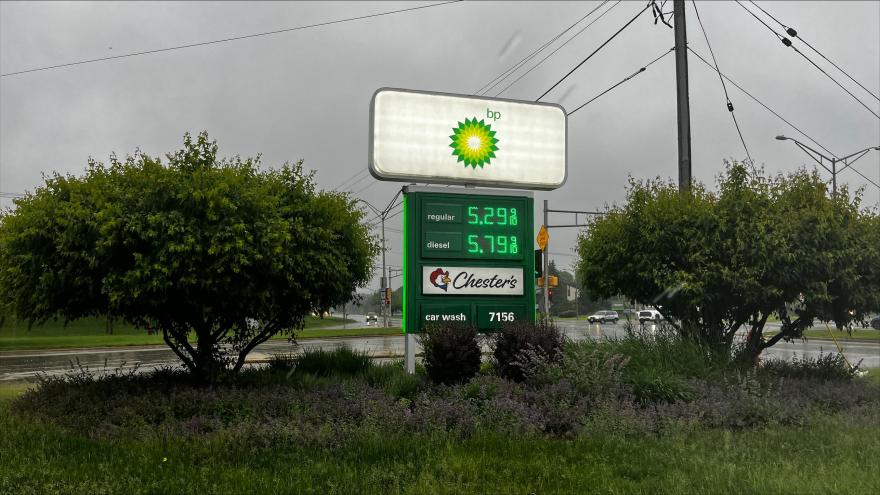 (CNN) -- Another day, another record for US gas prices.

The US average for the price of a gallon of regular gas hit $4.96 according to the most recent reading from AAA Wednesday. It marked the 12th straight day, and the 29th time in the last 30 that gas has set a record in America.

For much of the country, $5 gas is already here.

There are now 17 states with averages of $5 or above. Idaho, Ohio and Pennsylvania became the latest states to cross that threshold. The highest priced state remains California, with a state average of $6.39 a gallon.

The statewide average rose by at least a penny in every state but Florida, where prices remained essentially unchanged. And as of Tuesday, 29% of the nation's 130,000 gas stations were already selling gas for more than $5 a gallon.

And the worst is yet to come for drivers.

With the summer travel season just getting underway, demand for gasoline, coupled with the cut-off of Russian oil shipments due to the war in Ukraine, is sending oil prices higher on global markets.

The national average for gasoline could be close to $6 by later this summer according to Tom Kloza, global head of energy analysis for the OPIS, which tracks gas prices for AAA.

"Anything goes from June 20 to Labor Day," Kloza said about the demand for gas as people hit the road for long-anticipated getaways. "Come hell or high gas prices, people are going to take vacations,"

While the United States has never imported significant amounts of oil from Russia, the commodity is traded on global markets, and Europe was greatly dependent on Russian exports. The EU's recent decision to ban oil tanker shipments from Russia as sent oil prices soaring on those global markets.

The price of a barrel of crude is now above $120 a barrel, up from just less than $100 a month ago, And prices continued to climb in early trading Wednesday. Goldman Sachs predicted the average price for a barrel of Brent crude, the benchmark used for oil traded in Europe, will be $140 a barrel between July and September, up from its prior call of $125 a barrel.

There are stations and states where gas is cheaper. About 20% of stations nationwide still are selling gas for less than $4.50 a gallon. But even in many states where gasoline is cheaper, such as Mississippi, lower average income can mean drivers have to work longer to fill-up their tanks than in some high gas price states such as California.

How much are drivers willing to pay before they cut back on driving? So far the number of gallons pumped at stations in the last week of May was down only about 5% from the same week a year ago, even though gas prices rose more than 50% during the same period. The number of US trips by car has slipped about 5% since early May, according to mobility research firm Inrix, although those trips are still up about 5% since the start of the year.

The concern is that consumers will cut back on other spending to keep driving the miles they want or need to drive, which could drive an economy already showing some signs of weakness into recession.