Why every Costco product is called 'Kirkland Signature' 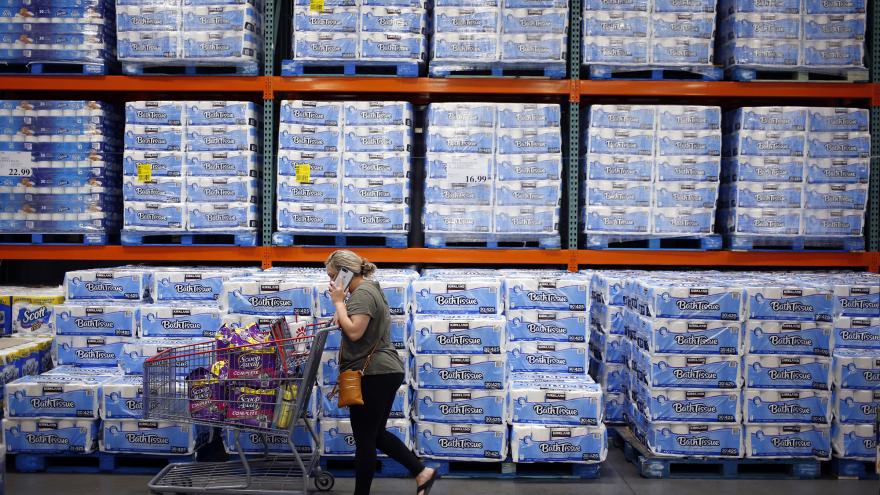 Kirkland raked in $58 billion in sales during Costco's latest fiscal year, making up around a quarter of the company's total revenue. Kirkland is America's biggest consumer packaged goods' brand measured by sales. It's larger than Hershey, Campbell Soup or Kellogg.

But it wasn't always this way. It took Costco a couple decades to get its Kirkland strategy right.

If you shopped at Costco in the United States three decades ago, you'd find about 30 different Costco private-label brands alongside the big-name food and household staples' lines.

There was Simply Soda. Chelsea toilet paper. Ballantrae wine. Clout detergent. Nutra Nuggets dog food. These brands were sold only at Costco, which was called PriceCostco at the time after Price Club and Costco merged in 1993 (Costco dropped 'Price' from its name four years later).

But Jim Sinegal, Costco's co-founder and CEO at the time, decided these brand names were forgettable. He sensed a major opportunity to overhaul the company's private-label strategy.

Sinegal was inspired by a 1991 article in Forbes about rising profit margins for leading consumer goods' companies at the time like General Foods, H.J. Heinz and Nabisco and the emerging growth of private-label brands. Consumers are "starting to switch to house brands...The trend so far is only a trickle but it shows signs of growing fairly rapidly," the article said. Sinegal underlined key passages from the article and sent it around to Costco's top merchants.

Costco at the time was also expanding internationally, including in the United Kingdom and Canada, where stores' private-label brands were better quality and more popular with shoppers than in the United States. Most US chains' private brands had been boring, knockoff brands with white labels.

"We found that there was a resurgence of private-label product, and that was driven an awful lot by the fact that the prices of brand-name products were growing so rapidly," Sinegal said at a talk in 2019 at Georgetown University. Rising prices for big-name brands "created an umbrella" for Costco to develop its own brands at 15% to 20% below branded alternatives, he said.

Sinegal told Costco's merchants that he wanted the quality of Costco's private labels to replicate those found overseas. And he had an unusual request — one name for all of them.

"The conventional wisdom said that you had to have a different name for every class of product that you had — a la Sears Roebuck with the Kenmore appliances and the DieHard batteries and the Craftsman tools," Sinegal said in 2019. "We looked at it and we said, you know, we're in so many countries and we have such a wide array of products we'll have a room full of attorneys that are doing nothing but trying to clear these names."

Sinegal asked staff for suggestions for a name and someone floated Kirkland Signature, a spin on the location of the company's Washington State headquarters, and came to executives with a design. ("Seattle Signature" was also considered, but Costco couldn't trademark the name.)

"We liked it," Sinegal said. "We cleared it for every country and every product category that we would have. That made it simple."

So in 1995, all those private brand names disappeared at Costco and were replaced by a new logo with a simple black, white and red design reading Kirkland Signature.

Although Costco soon moved its headquarters to nearby Issaquah, the Kirkland name stuck: "Nobody could spell Issaquah, so we kept it."

Kirkland Signature, known as "KS" at Costco, would soon be slapped on everything from diapers to tires to golf clubs.

Last year, Costco introduced a 24-pack of 12oz Kirkland hard seltzer and a 750ml Prosecco rosé. This year, Costco is adding Kirkland cauliflower pizza, furnace filters and a set of saute pans, among other items.

The sole private-label brand at Costco is an essential part of the retailer's positioning with customers and a way for Costco to stand out against competitors.

Kirkland, which is exclusive to Costco, draws members into warehouses and leads them to renew their $60 and $120 annual memberships every year. Perhaps more important to the company, Kirkland helps Costco solidify its image as a value store with quality products, say analysts.

"Kirkland is a proxy brand for Costco. It really means Costco," said Christopher Durham, president of Retail Brands Institute, a trade group representing the private brand industry. Kirkland is designed to appeal across demographic groups, he said, unlike many other retailers' array of private labels that are each targeted at a specific segment of shoppers.

Having one name signals consistency to shoppers — exactly Costco's goal — and also creates cost efficiencies for the no-frills retailer. Costco doesn't have to pay for different packaging and can put all of its buying power with suppliers behind Kirkland. A single private brand is emblematic of Costco's broader approach to merchandise at warehouses: Less choice is better.

"Kirkland has a one-note strategy and it's really good at that one note," Durham said. "It creates a reason and a point of differentiation for people to shop there."

'Don't get it wrong'

Many retailers have made developing their own brands a priority in recent years. Store products carry higher profit margins than national brand products and don't incur the same advertising costs.

But Costco's approach is novel. It's still one of the only large retail chains to carry all of its private brands under a single banner. Costco rival Sam's Club in 2017 streamlined its 21 private brands into its Member's Mark brand.

Kroger says in filings that it produces and sells its private brands in three "tiers" — premium mainly under the Private Selection label, a middle brand called Kroger, and value brands such as Big K and Heritage Farm. Kroger also produces a natural and organic brand called Simple Truth.

Most supermarkets take a similar tiered strategy, known as "good, better, best," said Scott Mushkin, a retail analyst at R5 Capital. But Costco has "positioned Kirkland as a premium brand at value prices."

Other retailers also sell a wider variety of labels in an effort to target different types of consumers for various products.

Going all in on the Kirkland label remains a risk for Costco.

"Maintaining consistent product quality, competitive pricing, and availability" of Kirkland products is "essential" to keeping members loyal to Costco, the company says in its annual filings. If Kirkland "experiences a loss of member acceptance or confidence," sales and profit margins may suffer.

"If you get 99 things right and one thing wrong, people are going to remember the one thing. So you don't get it wrong," said Costco finance chief Richard Galanti. "From an opportunity standpoint, Kirkland is known. It's a brand."