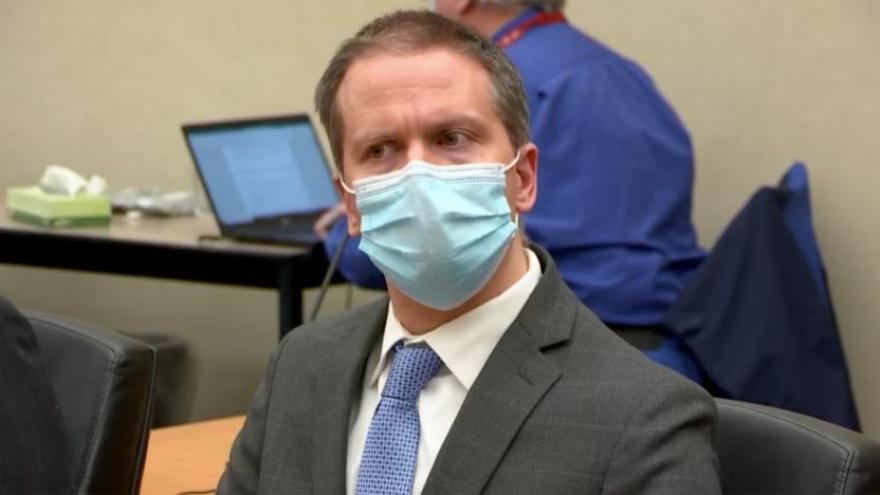 Derek Chauvin was found guilty of the murder of George Floyd on April 20.

(CNN) -- When police officers kill a person, they are rarely charged with a crime. It's even more rare for a jury to convict an officer for murder or manslaughter.

So what made Derek Chauvin's case different?

It was captured in clear and intimate video by bystanders and the officers' body cameras. It lasted over 9 minutes rather than a few seconds. Police officials across the country came together to denounce his actions as excessive. And making it all the more upsetting was Chauvin's impassive facial expressions and body language throughout.

Combined, these factors spurred people across the world to pour into the streets in protest and frustration, and they spurred accomplished lawyers and renowned medical experts to link up with Minnesota prosecutors on the case.

And in the courtroom, prosecutors repeatedly highlighted these four factors to convince a jury to convict Chauvin of two counts of murder and one count of manslaughter. Here's a closer look at how they did so.

The case against Chauvin starts and ends with Darnella Frazier's bystander video showing Chauvin kneeling on Floyd's neck and back as the 46-year-old Black man pleaded for his life and called for his "mama."

The prosecution called 38 witnesses in their case against Chauvin, but the focal point of it all was the video.

It was played for the jury in its entirety during opening statements, and then it was played again and again and again. The prosecution played composite videos that combined Frazier's footage with that from police body cameras, and they played clips of the video for witnesses, police experts and medical experts who walked jurors through it moment by moment.

The video's enduring power to shock was no more evident than during the testimony of Charles McMillian. The 61-year-old bystander broke down in tears while testifying after a clip of the video was played for him.

"I feel helpless," he said through sobs. "I don't have a mama either. I understand him."

Throughout the trial, the prosecution's message was concise and video-focused: "Believe your eyes."

The 9 minutes and 29 seconds

Most police killings are shootings -- split-second decisions with fatal consequences. Juries have long been wary of second-guessing a police officer's rapid decision made under difficult circumstances.

But Chauvin's kneeling on Floyd's neck took place over 9 minutes and 29 seconds in all, which prosecuting attorney Jerry Blackwell called the "three most important numbers in this case."

"This case is not about split-second decision-making," Blackwell said in opening statements.

Aware of the power of that 9:29 figure, defense attorney Eric Nelson tried to shift the focus onto other evidence and Floyd's actions beforehand in which he resisted police attempts to get him into the squad car.

"It's not the proper analysis because the 9 minutes and 29 seconds ignores the previous 16 minutes and 59 seconds. It completely disregards it," Nelson said.

Dozens of times in court, prosecutors showed witnesses and jurors "Exhibit 17" -- a still image of Chauvin on Floyd's neck taken from Frazier's bystander video. In the image, Chauvin has a disinterested look on his face, his sunglasses sit on top of his head, and his hand rests at his side. He appears altogether unconcerned with the desperation and agony just below him.

"You saw the photo, you saw the body language," Schleicher said in closing arguments. "You can learn a lot about someone by looking at their body language."

Yet the prosecution returned to the image again and again. In closing arguments, they showed jurors a close-up of Chauvin's face, only to then zoom out to show Floyd's pained face pinned below him. The contrast was clear.

"This wasn't the face of fear or concern or worry," Blackwell said of Chauvin.

Police testimony against him

Chauvin's actions didn't just infuriate the public -- they drew condemnation from within his own ranks and led to a stunning piercing of the so-called "blue wall" of silence.

The Minneapolis Police Department fired Chauvin and the three fellow officers who helped restrain Floyd a day after his death. And in court, a series of police training experts and supervisors testified against him, including several who knew Chauvin personally.

In particular, Chief Medaria Arradondo thoroughly rejected Chauvin's actions and use of force as contrary to department policy.

"Once there was no longer any resistance and clearly, when Mr. Floyd was no longer responsive and even motionless, to continue to apply that level of force to a person proned out, handcuffed behind their back -- that in no way shape or form is anything that is by policy," the police chief told the jury. "It is not part of our training, and it is certainly not part of our ethics or our values."

In addition, Chauvin's immediate supervisor criticized Chauvin's use of force, and the department's top homicide detective said kneeling on Floyd was "totally unnecessary."

During jury selection, the jurors generally expressed some support for police. Because of these intra-police criticisms, prosecutors were able to tell the jury that convicting Chauvin was a way to show that support.

In the end, even the nation's largest police union praised the trial as fair.

"Our system of justice has worked as it should, with the prosecutors and defense presenting their evidence to the jury, which then deliberated and delivered a verdict," the Fraternal Order of Police said in a statement. "The trial was fair and due process was served."