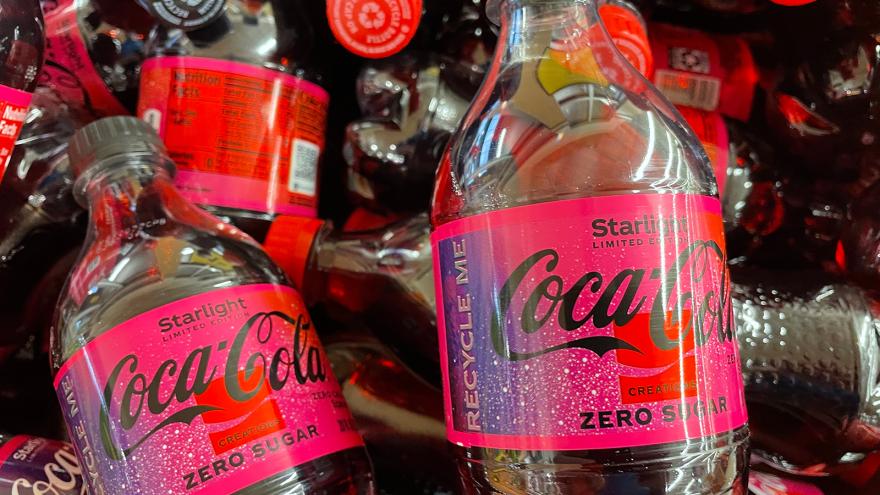 (CNN) -- Coca-Cola famously won't tell you the recipe for Coke. It's not about to tell you what's in its new limited-time flavors, either.

Over the past several months, Coca-Cola has rolled out a number of curious products: Coca-Cola Starlight, Byte and Dreamworld. For each of the limited-time flavors, the beverage company offered high-concept descriptions of an experience, rather than specific flavors. For Coke, the mystery is the point.

"We're engaging with people," said Selman Careaga, global category president of Coca-Cola Trademark, which includes Coke drinks but not other Coca-Cola products like Fanta, Sprite or others. "They're interacting with us, and they're trying to guess what's in it."

Getting people talking is an important marketing strategy for Coke, especially if it can spark interest among young consumers.

Recently, Coca-Cola has been "really trying to encourage consumers to debate" over their products, noted Duane Stanford, editor of Beverage Digest. When the company unveiled its new Coke Zero recipe, for example, it encouraged customers to decide whether it was the "best Coke ever." And it's been selling mystery Fanta flavors as part of its "What the Fanta?" campaign.

Conversations around product flavors put brands front-of-mind for consumers. Coca-Cola wants people who engage in these discussions, or see them online, to think about Coke when they walk into a store, noted Stanford. And it's especially important for the beverage company to create chatter around its marquee brand, which it has prioritized after slashing underperforming brands.

Plus, these products aren't just out-there Coke flavors. Each comes with a dedicated online experience. Together, they're designed to capture the attention of a coveted demographic: Gen Z.

Instead of a traditional flavor like "vanilla" or "cherry," Coca-Cola provided each product with its own vague description, and let fans fill in the blanks.

The company described Starlight as having "notes reminiscent of stargazing around a campfire, as well as a cooling sensation that evokes the feeling of a cold journey to space." Byte "invites you to explore what pixels might taste like," and Dreamworld is somehow even more conceptual, promising consumers that they will "experience the familiar Coca-Cola taste now with a surprising and unexpected flavor from a dream world."

YouTubers reviewing the product groaned over the cheesy advertising, but still tried to puzzle out the taste, encouraging commenters to weigh in.

Guesses were all over the map: Some thought that Starlight tastes like cotton candy, funnel cake or S'mores. After trying Byte, some guessed blueberry or grapefruit. People said that Dreamworld tasted of mango, peach or orange. Or maybe cough syrup.

Some brands roll out mystery flavors, but reward customers with a reveal. Mountain Dew has made a tradition of releasing a secret VooDew flavor, and eventually telling customers what it is. Coca-Cola's Fanta flavors will be unveiled, as well.

But Starlight, Byte and Dreamworld's flavors are staying in the vault, said Careaga.

"In a way, [it's] like our secret formula," he said. And in this case, the flavors aren't really the point.

Coca-Cola didn't share sales figures for these products. But it is pleased with the results so far, said Careaga. Efforts like the mystery flavors have contributed to sales growth in Coke drinks overall, he said. Trademark Coke grew 7% in the second quarter.

The beverages were developed to fit into the broader themes of space, computing and dreams, respectively. But the flavors themselves? Not so important.

"It's really not so much about the taste of the product, but really around the experiences that we create," he said. Those experiences are often virtual, intending to capture a younger audience that spends lots of time online.

Each of the limited-time flavors was launched among a slew of digital experiences. To name a few: Starlight's can featured a QR code that granted customers access to a holographic Ava Max concert. Byte was launched in Fortnite, and Dreamworld customers could buy virtual merchandise for their online avatars.

What is important, however, is that every Coke product tastes like a Coke.

"The R&D team does a great job [of] developing these new flavors, which are Coca-Cola based, but then we kind of play a little bit with the taste." Careaga said. "Without a doubt, it's a Coca-Cola product."

Developing new Coke flavors can be risky if they stray too far from the signature flavor, Stanford noted.

"When you create these formulas that could be hit or miss, you've got to be very careful," Stanford said. "The longevity of the brand has been all about that very unique Coke taste," he added. "You want to make sure you don't undermine that long-term message."