Why Biden and Putin won't hold a joint press conference 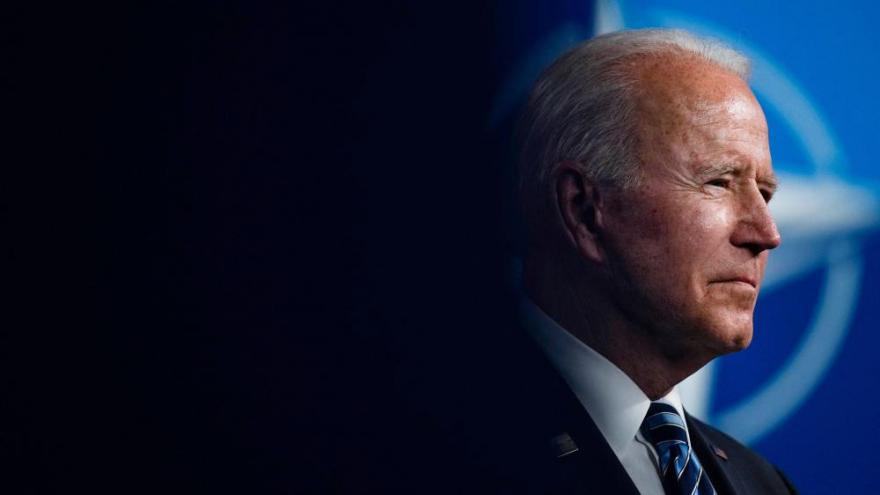 US President Joe Biden gives a press conference after the NATO summit at the North Atlantic Treaty Organization (NATO) headquarters in Brussels, on June 14.

(CNN) -- When US President Joe Biden and Russian President Vladimir Putin gather for their highly anticipated summit in Geneva on Wednesday, it will come at a time that both leaders say is a low point for relations between their two countries. So, perhaps unsurprisingly, a joint press conference following the summit is likely not in the cards.

The summit comes some six months after the start of Biden's tenure in office, offering him the chance to set the tone for relations with the Russian leader in person following a contentious start to their relationship.

Wednesday's private meetings grant the President, who has sometimes stumbled in his messaging while in front of the press, the opportunity to confront Putin directly and without cameras.

Later, Biden will be able to deliver his own message to reporters about the talks without the pressure of speaking alongside an adversary. Instead of potentially facing the press with dueling messages about US-Russia relations, Biden and Putin will hold solo press conferences following the summit.

TIMELINE: Biden's experience with Russia, in key moments from 1973 to now

Officials said they were mindful of Putin's desire to appear like he'd gotten the better of a US president, and wanted to avoid a situation that devolved into a tit-for-tat playing out in public.

The decision also comes at the advice of a group of Russia experts who met with the President earlier this month, according to sources familiar with the discussion.

"This is not a contest about who can do better in front of a press conference or try to embarrass each other," Biden said on Sunday, explaining the decision.

The US-Russia talks are expected to take place at a lakeside villa in Switzerland and last around five hours or longer, according to a US official. Despite their lengthy agenda, the leaders are not expected to break bread.

In his first months in office, Biden made clear that Russia would face ramifications for a slew of actions against the US.

He told a reporter in March that he agreed that Putin was a "killer." And in April, the Biden administration issued sweeping sanctions and diplomatic expulsions over its interference in the 2020 US election, its SolarWinds cyberattack and its ongoing occupation and "severe human rights abuses" in Crimea.

But when issuing those new sanctions, Biden also underscored that the US still wants "a stable, predictable relationship" with Russia.

Now he faces questions about whether his past hardline rhetoric will match his administration's actions at the summit.

Biden has recently had to defend his administration's decision to waive sanctions for Russia's Nord Stream 2 pipeline. And while Biden has agreed to meet with Ukrainian President Volodomyr Zelensky later this summer in Washington, the White House appeared to essentially turn down Zelensky's initial request for an in-person meeting ahead of the Putin summit.

Asked on Tuesday in Brussels whether he still believes Putin is a killer, Biden also appeared to soften his language ahead of the summit talks.

"I believe he has, in the past, essentially acknowledged that he was -- there were certain things that he would do or did do," Biden said.

He continued, "But look, when I was asked that question on air, I answered it honestly. ... I don't think it matters a whole lot, in terms of this next meeting we're about to have."

But he also struck a tough message in other ways while fielding questions in Brussels, saying NATO members must root out corruption and "guard against those who would stoke hatred and division for political gain as phony populism."

Biden has told aides he believes Putin will respond to directness during their talks and wants to be ready to offer a frank message. He's also preparing to discuss areas of potential mutual interest.

During Wednesday's summit, there are also more incremental steps Biden may propose to establish a baseline between a new administration and a long-standing foe, one person familiar with the preparation said. The goal isn't any kind of dramatic breakthrough, and Biden and his aides alike have been careful to make clear there is no expectation of anything of the sort.

Officials want Biden to be prepared for the Russian leader's tactics, including his well-known habit of turning discussions of Russia's bad practices back on the United States. Biden has told aides he believes Putin will respond to directness during their talks and wants to be ready to offer a frank message.

Biden will become the fifth American president with whom Putin has met.

Not all of them held joint press conferences with Putin following their meetings, and when they have, they haven't always been pleasant or appeared to move in America's favor.

During a joint press conference in 2000 with then-President Bill Clinton, for example, the two leaders did not look at or smile at each other.

And when Trump held a press conference with Putin in 2018 in Helsinki, he declined to support the US government's assessment that Russia interfered in the 2016 presidential election, saying at the time that he didn't "see any reason why" Russia would be responsible.

"I have great confidence in my intelligence people, but I will tell you that President Putin was extremely strong and powerful in his denial today," Trump said during the press conference.

Biden has long been skeptical about America's relations with with Putin.

After former President George W. Bush met with Putin in Slovenia in June 2001, Bush said he looked him in the eye and got "a sense of his soul." But Biden, then a senator, responded by saying, "I don't trust Putin. Hopefully, the president was being stylistic rather than substantive."