Who is Madison Cawthorn, the freshman congressman causing headline chaos for the GOP? 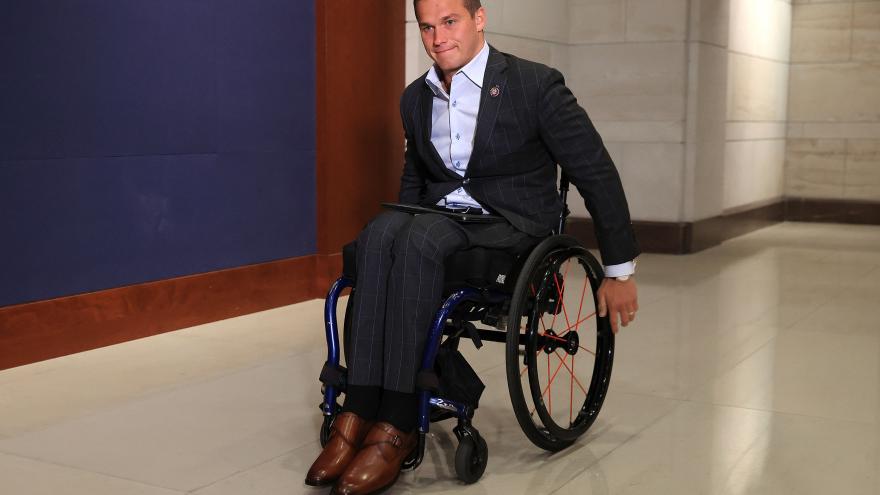 (CNN) -- Rep. Madison Cawthorn -- the freshman Republican representing North Carolina's 11th Congressional District in the US House of Representatives -- has in recent weeks become the center of chaos within the GOP.

The comments from the political newcomer, who faced charges in March for driving with a revoked license for the second time in five years, have drawn the ire of members of his own party.

CNN reported on Wednesday that Republican Sen. Thom Tillis of North Carolina is throwing his weight behind one of Cawthorn's primary opponent -- an extraordinary broadside against a fellow Republican from his home state, as internal frustration with the controversial MAGA firebrand reaches a boiling point.

According to multiple sources familiar with the discussions, other GOP lawmakers who are at their wits' end with Cawthorn are also considering endorsing one of his challengers, amid growing concerns that the North Carolina Republican is dragging down the entire party with his problematic behavior.

On Friday night, Cawthorn addressed his latest controversy in a tweeted statement, blaming the media and the left and vowing to "continue fighting for many years to come."

Ahead of the Tar Heel State's May 17 primary, Cawthorn is facing a number of opponents, including: state Sen. Chuck Edwards, whom Tillis said he is endorsing; Michele Woodhouse, a self-described "business-woman and political activist"; Bruce O'Connell, a hotel and restaurant operator; Rod Honeycutt, a retired US Army colonel; Matthew Burril, a businessman and local economic leader; and Wendy Nevarez, a Navy veteran.

Cawthorn's challengers are trying to take advantage of his numerous controversies, including his speech on January 6, 2021, in which he urged those at then-President Donald Trump's "Save America" rally to contest the election.

Controversial from the start

Cawthorn -- who was partially paralyzed in a 2014 car accident and was the owner of a real estate investment company as well as a motivational speaker prior to his time on Capitol Hill -- caused contention even before entering the halls of Congress.

In 2020, he scored a stunning political upset when he won the GOP nomination for the House seat of then-White House chief of staff Mark Meadows, despite Trump endorsing one of his GOP primary opponents.

After winning the primary runoff, the young Republican -- who turned 25 before the general election, making him eligible to serve in the House -- received the backing of Trump and was lauded for his charisma and appeal to younger voters.

"He's 24-years-old, he's dynamic, he was able to articulate the ability to reach out to younger voters. I've heard him referred to by some as 'The AOC of the right.' I don't know if that'll borne out to be true, but I do think that the generational piece is key here as well," Chris Cooper, a political science professor at Western Carolina University, said after Cawthorn's primary victory.

But CNN reported that Cawthorn went on the defensive after photos of a 2017 trip to Adolf Hitler's vacation house surfaced on Instagram. He wrote that the visit had been on his "bucket list for awhile" and "did not disappoint."

Allegations of sexual harassment and misconduct made against Cawthorn by several women when he was in college also surfaced after he began his political career. For his part, Cawthorn has said, "I have never done anything sexually inappropriate in my life."

Cawthorn has become closely allied with Trump and voted to overturn the results of the 2020 presidential election.

Since then, however, the North Carolina congressman has contradicted himself when it comes to his statements on the 2020 election.

In January 2021, Cawthorn admitted that there was no fraud in the 2020 election after he voted to sustain the objection to electoral votes from Arizona and Pennsylvania when Congress met to certify then-President-elect Joe Biden's victory.

"Yes, I think I would say that the election was not fraudulent," he told CNN at the time. "You know, the Constitution allowed for us to be able to push back as much as we could and I did that to the amount of the constitutional limits that I had at my disposal. So now I would say that Joseph R. Biden is our president."

Yet last August, Cawthorn suggested there could be "bloodshed" over future elections as he pushed false claims about election security and voter fraud.

Speaking at a North Carolina county GOP event, Cawthorn repeated the lie about US election systems being "rigged" and "stolen," something he said would "lead to one place, and that's bloodshed" if it continued.

"And I will tell you, as much as I am willing to defend our liberty at all costs, there's nothing that I would dread doing more than having to pick up arms against a fellow American. And the way that we can have recourse against that is if we all passionately demand that we have election security in all 50 states," the North Carolina Republican said at the time.

Cawthorn spokesman Luke Ball told CNN in a statement at the time, "Congressman Cawthorn is CLEARLY advocating for violence not to occur over election integrity questions."

"He fears others would erroneously choose that route and strongly states that election integrity issues should be resolved peacefully and never through violence," Ball said.

Ball maintained in August that "Congressman Cawthorn's views on the 2020 election have remained consistent."

In Feburary, Cawthorn filed a lawsuit to shut down efforts by liberal activists to disqualify him from running for Congress because of his role in the January 6 insurrection. Cawthorn spoke at Trump's January 6, 2021, rally and posted militant tweets in the run-up to the attack on the US Capitol.

In their challenge, lawyers for the group Free Speech For People said Cawthorn essentially aided and abetted the insurrection, and should be disqualified from office because he "was involved in efforts to intimidate Congress and the Vice President into rejecting valid electoral votes and subvert the essential constitutional function of an orderly and peaceful transition of power."

A federal judge in early March shut down the legal challenge to Cawthorn's candidacy, but the liberal activists, legal scholars and anti-Trump Republicans who oppose Cawthorn asked the Fourth Circuit Court of Appeals to step in and revive their challenge.