'White Only' signs for sale at antiques store spark confrontation 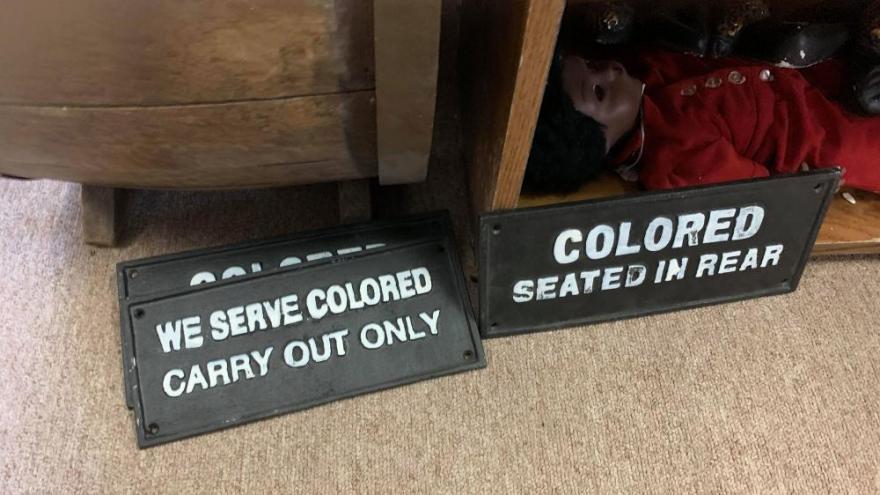 (CNN) -- Nicola Shanks was browsing the aisles of an antique store in Cortez, Colorado, last week when she noticed several signs that took her aback.

"Colored Seated In Rear," another read.

"We Serve Colored Carry Out Only," read a third.

Shanks, a stay-at-home mom with an African-American daughter, was angered by the Jim Crow-era racist signs, she told CNN.

"I think it was disbelief at first, that I was actually seeing these signs in a store. It's something I would expect to see at the Jim Crow museum, not in a local antique store," she said.

That anger pushed Shanks to confront a store employee about the signs, and days later, she returned to the store to speak directly to the owner about removing them.

But the store's owner, Cheryl Dean, refused to back down over the course of a 15-minute conversation, Shanks said. Dean, who did not respond to CNN's request for comment, said the signs were not racist in nature, according to CNN affiliate KDVR.

"I've lived in a small town my whole life. I don't even know what the word means. There's been black people in the store and we laugh about it. There's people that collect that stuff. It has nothing to do with racism. It's part of history, like, 'Look how far we've come,'" Dean said.

But Shanks said that she believes the historical argument does not hold up.

"The thing that was even more upsetting to me is the fact that they're not antiques, they're replicas," Shanks said.

In the past few days, Dean has faced a torrent of criticism and threats online, she told KDVR. She also said that the signs had sold out, and she did not plan to replace them.

Shanks said she did not condone threats to Dean and that she wanted to find common ground on the issue with the owner.

"My hope confronting her is that she would have a change of heart and hear what people of color have to say and how this affects them, not from me but from information I would share with her," she said.