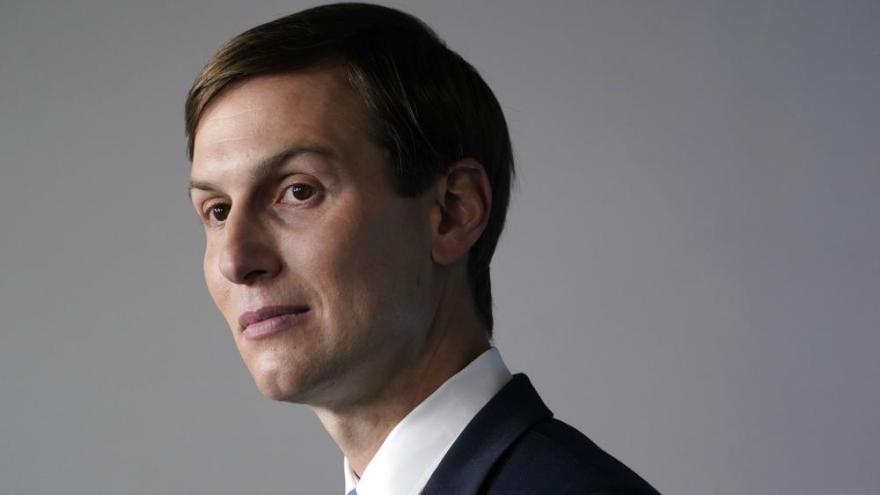 The White House works to rally support for the UAE arms sale. In this image, senior White House adviser Jared Kushner listens during a news conference at the White House in Washington, D.C. on Friday, Sept. 4, 2020.

(CNN) -- The Trump administration is working to rally support in the Senate for its controversial high-dollar arms sale to the United Arab Emirates ahead of a vote to block that transfer.

President Donald Trump's senior adviser and son-in-law, Jared Kushner, participated in a Senate Republican call Tuesday about the planned $23 billion sale of F-35 fighter jets, Reaper drones and munitions to the UAE, according to a Senate aide.

Senators of both parties have voiced various concerns about the sale -- including the speed at which it is being pursued and its potential impact on human rights and broader regional security -- and whether Congress was properly involved in the process.

CNN has previously reported on Kushner's secret push to sell the weapons to the UAE, causing confusion and frustration among agencies and congressional committees that would normally be involved in such a sale but have been left in the dark. The President's son-in-law also was a key figure in the Abraham Accords, the agreement to normalize relations between the UAE and Israel that paved the way for the proposed sale.

Sen. Chris Murphy, a Connecticut Democrat, announced on Twitter last week that he, Democratic Sen. Robert Menendez of New Jersey and Republican Sen. Rand Paul of Kentucky had introduced a privileged resolution to block the sale.

That resolution is expected to be voted on this week. It is unclear if there is enough support for it to pass, but a Democratic aide told CNN that "the fact that the White House is doing such a full-court press suggests they are nervous about vote count."

Even if the measure were to garner enough support in Congress, it would likely face a veto from Trump. The President vetoed several bipartisan measures passed by both chambers of Congress to curtail arms sales to Saudi Arabia and the UAE in July 2019.

Assistant Secretary of State for Political-Military Affairs R. Clarke Cooper said in a call with reporters Tuesday that ahead of the end of the 30-day congressional notification period on Friday, the State Department was continuing "to work with the UAE on the letters of offer and acceptance that, if concluded, would finalize any deal."

"We continue to engage in a healthy and productive dialogue with Congress on the process as it continues forward," he said.

Cooper told reporters that "the diligence and then the expedience of these sales was in the wake of the Abraham Accords" and claimed that the Persian Gulf nation's recognition of Israel had "brought to bear further risk" to the region by Iran.

A senior State Department official told CNN that State Department officials have had a slew of calls with Congress about the arms sale and the main issues of concern were the security of the technology transfer and the impact on Israel's qualitative military edge -- the comparative technological, tactical and other advantages in its weapons that allow it to maintain military superiority in the region.

Israeli government officials have indicated they do not oppose the sale to the UAE, but concerns over the technology transfer -- and how to prevent that sensitive tech from falling into the hands of adversaries -- remain.

"You cannot fast-track those sales until you have assurances that the technology transfer is safe, and we cannot tell members of Congress that we have all the assurances we need," the senior State Department official said.

CNN has previously reported that arms sold by the US to the Saudis and Emiratis had been transferred to al Qaeda-linked fighters, hardline Salafi militias and other factions waging war in Yemen. The Trump administration cleared the UAE of wrongdoing.