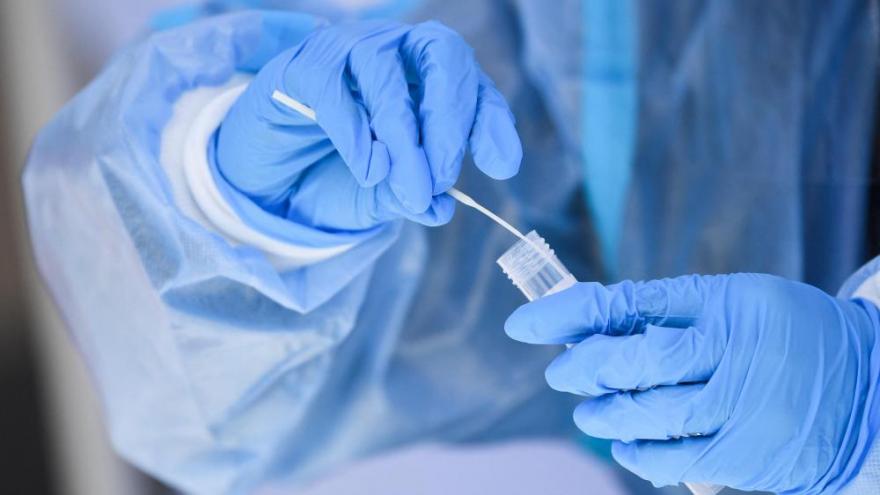 A healthcare worker places a test swab into solution for a PCR Covid-19 test at a testing site in Hawthorne, California, on January 18. The White House is amping up its warning to congressional leaders that aspects of the federal Covid-19 response will be curtailed after lawmakers failed to pass additional funding.

(CNN) -- The White House is amping up its warning that aspects of the federal Covid-19 response will be curtailed after lawmakers failed to pass additional funding, with administration officials speaking in dire terms in a call with reporters and sending a letter to congressional leaders Tuesday.

The latest warnings mark an escalation in pressure from Biden administration ahead of key funding deadlines. Additional funding for federal Covid-19 efforts was initially included in a recent massive omnibus spending package, but it was stripped out following Democratic complaints about how the spending would be offset.

The Biden administration requested $22.5 billion in supplemental Covid-19 relief funding in the massive government funding package, known as the omnibus. Negotiators had proposed a scaled-back $15.6 billion for Covid relief, but following pushback on both sides of the aisle, House Speaker Nancy Pelosi announced that Covid provisions would be stripped from the funding bill, which passed late last week. House Democrats have introduced a standalone Covid relief bill, but it does not currently have the votes to pass both chambers.

In a sign of the urgency the administration feels around the need for Covid-19 supplemental funding, Biden administration officials briefed reporters on specific immediate and longer-term impacts of a lapse in federal funding for aspects of the Covid-19 response, including vaccines, treatments and global efforts.

As daily cases were up 48% in the United Kingdom over the past week and are rising in more than half of the countries in the European Union, a senior administration official warned that Congress' failure to pass a supplemental Covid funding bill could leave the US unprepared for another potential surge.

"Our scientific and medical experts have been clear that in the next couple of months, we could see Covid cases increase here in the US just as we're seeing cases rising abroad right now," the senior official said, adding, "We are well less prepared without additional funding than we would be otherwise."

The official starkly warned that "further inaction will leave us vastly unprepared and cost us more life," laying out some of the immediate concerns.

There are not "adequate resources to purchase enough booster shots for all Americans if an additional booster shot is needed," the official said, noting that immunocompromised individuals are already eligible for a fourth vaccine shot, but if all Americans were to become eligible, there would not be enough funding to make those shots free and accessible.

"We cannot be caught without the ability to move quickly to get more of the most effective vaccines available as soon as we are able," the official said.

There would also be immediate impacts to treatment efforts, including the expected purchase of hundreds of thousands of monoclonal antibody treatments as soon as next week.

"Without additional funding, we are canceling those plans," the official cautioned.

Additionally, the administration is informing the nation's governors Tuesday morning that they will be cutting the number of monoclonal antibody treatment sent to states by 30% starting next week.

But with those cuts, the official said, "We anticipate that our supply of monoclonal antibody treatments will run out as soon as late May."

Without funding, the government will also scale back its purchase of AstraZeneca's preventative treatment for immunocompromised individuals.

Additionally, the fund that reimburses doctors and other providers caring for uninsured individuals is going to run out of funding in March, the official said, and will be scaled back "starting next week" and "(ending) completely in early April."

"This means doctors, nurses, pharmacists, labs and other health care providers will no longer be reimbursed for tests, treatments and vaccinations for people without health insurance," the official said.

A lack of funding will also impact the administration's efforts to help vaccinate the world and mitigate future variants.

"This will devastate our ability to ensure these countries can effectively deploy safe and effective vaccines, and leaving large unvaccinated populations worldwide will increase the risk of new, deadly emerging variants emerging that could evade our current vaccines and treatments," the official said, adding that it will also impact USAID's ability to provide therapeutic oxygen and other humanitarian aid to countries in need.

A second senior administration official warned of impacts to research and development.

"Without additional support from Congress, NIH (National Institutes of Health) and BARDA (Biomedical Advanced Research and Development Authority) will lack the funding needed to accelerate research and development of next generation vaccines that provide broader and more durable protection, including a vaccine that protects against a range of variants. We'll face a similar challenge on treatments," the second official said.

That, the official continued, "will leave the nation vulnerable in the face of a new variant or a new surge."

And after last year's efforts to scale up domestic testing manufacturing amid the Omicron surge, the official warned that "without additional funding, we do not have the ability to maintain our domestic testing capacity beyond June," noting that Congress "risks squandering that capacity," which takes months to ramp up.

The officials stood by the administration's initial request for $22.5 billion to fund these needs, stressing the importance of keeping the federal government's Covid response accessible to all Americans.

"Waiting to provide funding until we're in a worse spot with the virus will be too late. Importantly, when you consider the cost of all of these investments compared to the cost of what we will prevent in terms of hospitalizations, deaths and damages for health care systems and our economy, it is not a close call," the first official said.

"Jeff Zients outlined the severe consequences that a lack of funding from Congress will have on the resources and tools that every governor, in every state rely on from the federal government for their Covid-19 response," a White House official said. "He made clear that the successful partnership that the federal government has had with states throughout the last 14 months will be hindered without action from Congress to provide funding."

Similar concerns will also be directly communicated in a letter from the White House to congressional leadership Tuesday.

"Today, the White House will notify congressional leadership of the steps it will begin taking to stop critical Covid response efforts because Congress has not yet provided the funding requested by mid-March," a source familiar with the matter tells CNN.

Senior White House and administration officials -- including White House Covid-19 response coordinator Jeff Zients, acting Office of Management and Budget Director Shalanda Young and Health and Human Services Secretary Xavier Becerra -- have held over three dozen calls and meetings with bipartisan members of Congress to warn of the consequences of running out of Covid response funding, the source said Tuesday. There have also been at least 10 briefings on the matter since January 11.